Goddard Kicks off hot new Series with a Cold Case 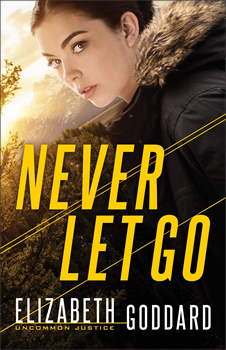 Fans of bestselling author Elizabeth Goddard have reason to get excited about the release of her newest book, NEVER LET GO—it’s the first romantic suspense novel in her Uncommon Justice series.

NEVER LET GO introduces Willow Anderson, a forensic genealogist determined to solve a cold case involving a baby abducted from the hospital more than 20 years ago. When Willow’s investigation puts her life at risk, ex-FBI agent and former boyfriend Austin McKade gets involved. Together they search for clues about an old mystery while confronting aspects of their pasts. Award-winning author Patricia Bradley said of the book, “A 21-year-old cold case, arson, murder, romance…I couldn’t put NEVER LET GO down until ‘The End,’ and then I wished for more.”

The idea for Willow’s unique profession came from a newspaper article Goddard read that described a forensic genealogist who assisted police in discovering the true identity of a young woman who’d died.

Goddard says, “As authors we’re always on the lookout for that inspiring idea. I keep a file with stories from the news or intriguing careers. That said, nothing has ever jumped out at me like [this] newspaper article. As it turned out, the woman had been missing for 15 years and her family was glad to learn what happened to her. She had chosen to ‘disappear’ and start a new life on the other side of the country.”

The profession intrigued Goddard and she knew she had to use it in her books. Later, Goddard came across a story about a young woman who had been kidnapped at birth and didn’t discover her true parentage until she was in her early twenties. “Then I knew I had my story,” Goddard says.

The story itself is set in Wyoming, a wild, beautiful, rugged locale that serves not only as a backdrop to the suspenseful plot but as a character in the novel. Goddard, a seventh generation Texan, understands the importance of place—and this shows in her work.

“Texas is a larger-than-life kind of place to live,” Goddard says. “And growing up, family was and is important. It means safety and security, and a deep sense of being grounded and knowing who you are. But in 2005 my husband (who was from Montana) uprooted us to move to Oregon and since then, I’ve lived in Louisiana, Minneapolis, and now Michigan!”

Goddard’s travels have strongly influenced her novels. “Setting is everything,” she says. “I might have selected an occupation for my character or a crime to be solved, but those elements will need to take place in a setting that truly inspires me. And don’t laugh, but I think that growing up in Texas where the land is flat made me want to see the mountains. So many of my stories are set near mountains or a rocky coast.”

Goddard explains that she has quite a few novels that take place in the Pacific Northwest because she loves the region and the rocky coastline.

Another of her favorite places is Jackson Hole, Wyoming, a childhood vacation spot near her husband’s hometown. No surprise, then, that NEVER LET GO takes place in a fictional town in the region.

Goddard says, “Grayback is sort of modeled after Jackson, but is located in Jackson Hole—the valley between the Tetons and Gros Ventre Ranges. The peak known as Grand Teton is in every story. See? Setting is everything.”

Goddard would know. In addition to writing romantic suspense, she has also written romance novels. In fact, Goddard has written more than 30 novels, and her books have been nominated for and won awards, including the Daphne Du Maurier Award for Excellence in Mystery and Suspense (nominations) and the Carol Award.

Despite these honors, Goddard’s journey to publication was not a straight road.

“Like most writers, I didn’t start out writing. I got my degree in computer science and for most of my twenties I worked in corporate America,” she says. “But the desire to write had always been inside of me. When I had three kids, [ages] eight, two, and one, I decided to start pursuing writing for publication. Crazy, right? I was home and I needed that escape, if you will.”

In 2001, Goddard joined American Christian Fiction Writers (then American Christian Romance Writers) and was placed in a critique group. Each group member submitted a chapter every week for critique. “I had never written a chapter, much less a novel,” Goddard says. “But I became close with that group of ladies and some of us are still close friends today. All of us are multi-published writers.”

Goddard found being in a critique group hard. “Often I’d make sure I had double chocolate chunk ice cream in the freezer before I would read the critiques. It could take me a week, but I’d eat the ice cream and then get over it. Learn from it and move on. You have to have thick skin.”

“I attended the ACFW conference every year and made new friends, networked with editors and agents until finally I landed my first contract with Heartsong Presents in 2006. After writing romance for Heartsong Presents for a while, I added Harlequin’s Love Inspired Suspense to the mix.”

Goddard had additional aspirations. “It has always been my dream to write a trade-length novel and not just for category. In fact, my dream publisher (in the Christian market) was Revell. In early 2017 my agent Steve Laube sent me an email to inform me that Revell was looking for romantic suspense. I was so upset—of course they’re looking! I don’t even have a proposal ready! I put one together in two weeks and guess what I used?—the forensic genealogist! I heard back from the editor within a month, and in a few short weeks I signed a contract with Revell for a three-book series set in Wyoming, and it’s the beginning of what I hope is a long writing career with them.”

Readers hope so, too.

Given Goddard’s successful shift from corporate America to prolific author, what advice does she have for authors who are just starting out? “Don’t submit to a publisher or self-publish before you’re ready,” Goddard says. “It takes time and practice to learn any craft, so write, write, write and read, read, read. Attend conferences to learn content, craft, and make connections.”

As for what’s next for Goddard: “Right before Christmas I turned in Always Look Twice, book two in Uncommon Justice, and now I’m starting on the untitled book three in the series, while promoting NEVER LET GO.”