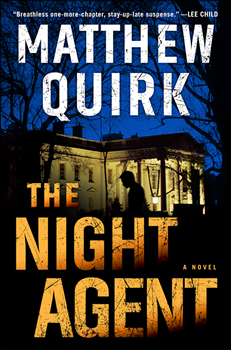 Sometimes you get lucky. You come up with a pretty good idea for a novel, something you think is a little different, a little interesting, a little exciting, and possibly a little relevant. You spend a year working on the manuscript, and then there’s another chunk of time waiting for your agent to sell the book—maybe six months or so—and then it’s another nine months to a year before the book finally hits shelves.

And here’s the lucky part: In that time the subject you’re writing about, the thing you thought was a pretty good idea, possibly relevant and kind of under the radar, suddenly becomes front-page news and now you’re not behind the wave, you’re not ahead of the wave, you are the wave. And it’s a big wave—so big that people who don’t know how slowly publishing tends to move might think you simply took advantage of a wave everyone knew about.

This is pretty much what happened to Matthew Quirk with his latest novel, THE NIGHT AGENT, about an idealistic young FBI agent on a desperate hunt for a Russian mole working at the highest levels of the U.S. government. Peter Sutherland is a low-level agent with a dark family legacy—his father died while under suspicion of spying for the Russians. Peter is assigned the night shift in the Situation Room at the White House, where he receives a call from a woman who believes she’s witnessed an assassination. That call, and Peter’s attempts to keep the woman safe, launch him into a fast-paced thriller of betrayal and double-dealing, as he uncovers a stunning conspiracy that could tear our country apart.

You know what they say on TV: “ripped from the headlines.” Only when Quirk came up with his idea, there were no tabloid headlines screaming Ruskies Infiltrate U.S. Government! Instead, Quirk simply used a collection of tales he heard from a friend who actually was a night agent.

That’s the lucky part. But then there’s the rest—the part most people don’t hear about. The hard work part.

Quirk came to writing thrillers legitimately. He grew up in Middletown, New Jersey, the youngest of three boys. Both of his parents were teachers; his father would later become a school administrator.

“My dad would read two or three thrillers a week, and my mom got her English degree and her master’s while I was in middle school,” says the 38-year-old Quirk. He remembers that weekends his mother would disappear into a room, shut the door, and he would hear the sound of her typing away on her IBM Selectric.

As a young child, Quirk was put to bed early and when he couldn’t fall asleep he’d read for two or three hours, gravitating toward authors such as Joseph Conrad. He was accepted to Harvard, thinking he would study physics, but he “fell in with a reading and writing crowd.” Quirk says he was nervous about switching his major to English, because he thought he should do “something practical.” But his love of language prevailed and he made the switch, which led to a job working on the university’s daily newspaper, The Harvard Crimson.

“I would stay up late writing on an old laptop,” Quirk remembers. “I loved doing this so much I knew I would do anything to keep at it, even if it meant working side jobs.”

His dream didn’t include working in Washington, but here’s where another stroke of luck changed the course of his life.

“I had a friend at the Crimson who was very good at connecting,” Quirk says. “The new owner of The Atlantic was looking to staff up the D.C. office, and I interviewed with him. As a college junior, I got an internship in D.C. I spent a few years there trying to claw my way into editorial. I didn’t know much about politics, but I learned pretty quick. It was the period running up to the Iraq War and I was writing squibs for the magazine. All this fired up my imagination and gave me a lot of the material I use today.”

As a junior reporter on the magazine, Quirk wrote about opium smuggling in Afghanistan, the gangs that cycled between the U.S. and Central America, and the cost of hiring private mercenaries.

“I always wanted to write thrillers,” he says, “but it took me a long time to figure out what I was best suited for—which, as it turns out, was to put relatable people into extraordinary situations. People who can pull back the curtain on how power works.”

Quirk’s process is simple. “I think of one character, and that suggests a way into a story. From there on, it’s pretty wide open. The character suggests a plot, which suggests other characters, and then I sit with it a long time until it all fleshes out and starts to connect.”

“I had a friend who had an overnight watch job in the White House, working national security,” Quirk says. “He would disappear for periods of time. I heard bits and pieces of what his job was and it was fascinating.”

So fascinating that Quirk used that job for the central character of THE NIGHT AGENT.

“That was the hook for the book, but when I started there were just a few inklings of the Russia stuff,” he says. “But as real life started to resemble the plot of my book, I had to rethink it and get ahead of the news, so there would still be surprises for the reader.”

Quirk’s influences range from William Goldman’s Marathon Man—“it was so sad to see him pass away”—to John LeCarre, to Michael Connelly—“I love the sense of decency in all his characters”—to Lee Child and Charles McCarry. He says THE NIGHT AGENT was strongly influenced by the conspiracy novels and films of the 1970s. “You know, the high-stakes politics during tumultuous times.”

Quirk lives in San Diego with his wife, who works in the corporate responsibility investment field. He’s lucky enough to write full-time. “I was laid off in 2008, when the bottom fell out of the economy. I had a thriller in my drawer and about a month before I was getting married, I sold it. That book was The 500, and it worked out far better than I could possibly have dreamed.”

Next up for Quirk is a novel he’s just putting the finishing touches on. “It has different characters,” he says, “but I’m pretty much working the same themes.”

And if he gets lucky, once again he’ll be the wave. 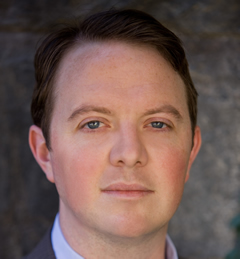 Matthew Quirk is the bestselling author of The 500, Dead Man Switch, Cold Barrel Zero, and The Directive. After graduating from Harvard with a degree in history and literature, he spent five years at The Atlantic reporting on crime, private military contractors, terrorism prosecutions, and international gangs. He lives in San Diego.