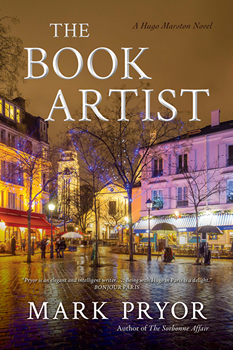 Hugo Marston accompanies his boss, U.S. Ambassador J. Bradford Taylor, to the first night of an art exhibition in Montmartre, Paris. Hugo is less than happy about going until he finds out that the sculptures on display are made from his favorite medium: books. Soon after the champagne starts to flow and the canapes are served, the night takes a deadly turn when one of the guests is found murdered.

Hugo lingers at the scene and offers his profiling expertise to help solve the crime, but the detective in charge quickly jumps to his own conclusions. He makes an arrest, but it’s someone that Hugo is certain is innocent. Meanwhile, his best friend, Tom Green, has disappeared to Amsterdam, hunting an enemy from their past, an enemy who gets the upper hand on Tom, and who then sets his sights on Hugo.

With an innocent person behind bars, a murder to solve, and his own life in danger, Hugo knows he has no time to waste as one killer tries to slip away, and another gets closer and closer.

The Big Thrill caught up to Mark Pryor to discuss the latest release in his
Hugo Marston series, THE BOOK ARTIST:

A couple of things, I think. First would be the initial thought along the line of, “Oh, of course, I shoulda seen that ‘X’ was the murderer!” Second, I hope readers will feel like they’ve gotten to know the characters a little better, and like them even more. For the first time, two are put in different kinds of serious jeopardy, and as anyone who’s read the series will know, my characters are not guaranteed to come out alive. I’ve also set the book in a particular part of Paris, Montmartre, so I’m hoping readers will enjoy learning a little more about that village within Paris.

Interesting question. I’m not sure I’d ever presume that a single book of mine would ever forward our wonderful genre on its own. I do think readers will learn something new, though, about a particular subject. I can’t say what here, it’d be a huge spoiler, but as students of crime and criminals, I do believe I’ve presented one particular situation in a way that will give new insight. Vague enough for you?

Absolutely. This is the first mystery I’ve ever written where I began without knowing who the killer was. I hit the one-third mark, and still didn’t know. It wasn’t until I was past halfway that it occurred to me that… well, who the killer had to be. It was kind of an exciting way to approach the book and I do wonder if dedicated readers of the series will be able to tell. That said, I’m into the next Hugo already, and began with the killer in mind.

The book itself will tell you a little about the brilliant book sculptures others have created, and about the concept of “slow TV.” The cover copy won’t tell you, either, about the demise of one recurring character, something I’d not planned but that became a necessary part of the story. Not a major character, I hasten to reassure you, but someone whose name will absolutely be familiar. So, a few surprises in there.

Oh, so many. Agatha Christie for her plotting, Arthur Conan Doyle for the pure logical approach of Sherlock Holmes, Alan Furst for his sense of place and setting, Philip Kerr for his humor. I’d say those are the most important ones, for sure. I think it’s important to point out, though, that I’m trying to read more widely, and there are some powerful new voices out there, people like Gabino Iglesias and Victoria Dahl, folks trying new things and succeeding brilliantly at it. It’s a fun time to be a writer, but an even more fun time to be a reader! 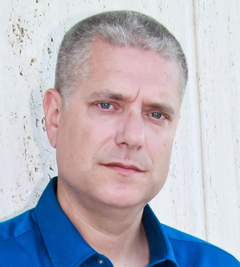 Mark Pryor is the author of the Hugo Marston novels, The Bookseller, The Crypt Thief, The Blood Promise, The Button Man, The Reluctant Matador, The Paris Librarian, and The Sorbonne Affair, as well as Hollow Man and Dominic. He has also published the true-crime book As She Lay Sleeping. A native of Hertfordshire, England, Pryor is an assistant district attorney in Austin, Texas, where he lives with his wife and three children.

To learn more about Mark and his work, please visit his website.