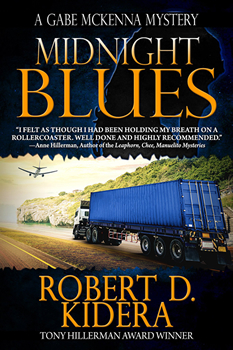 What kind of person would harm a child? P. I. Gabe McKenna and his buddy The Onion find out the hard way, when their plan to ransom a kidnapped boy goes horribly wrong. Finding themselves in a battle against international human traffickers, they rely on the help of unlikely friends in a race against time to rescue dozens of enslaved young victims. In a final, deadly showdown at a New Mexico ghost town, Gabe faces his ultimate challenge. How high a price is he willing to pay? Can he risk death and his own conscience to save the innocent without becoming worse than his enemies?

Hopefully, my readers will gain some insight into the corrosive problem of human trafficking, especially as it affects young people, native peoples, and the poor.

I believe that MIDNIGHT BLUES is topical and informative about a growing problem in this country and that it shows suspense novels can be both entertaining and address social problems in a responsible way at the same time. Thrillers and suspense novels can have serious purposes and social goals.

The most surprising aspect of human trafficking I came to appreciate was the sheer magnitude of it, and the difficulties law enforcement has when working across different jurisdictions, i.e. local, state, federal, and tribal personnel, trying to use resources and information in more effective ways.

Each of my Gabe McKenna novels features interesting secondary characters. That is one of the ways I try to keep the series fresh every time out. MIDNIGHT BLUES, even more than my other books, surrounds Gabe with some remarkable friends and allies. You won’t soon forget them.

As I tell everyone who asks, I came to my writing career later in my life, and so the example of Raymond Chandler has strongly influenced me not only in style and subject matter, but in finding the courage as a writer to take a new creative challenge when others are looking to retire. Another writer who has had a formative role in my career is Donald Westlake, who shows how much you can do with an ensemble of great characters. I only wish I’d had the opportunity to thank those two gentlemen in person. 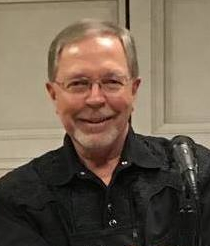