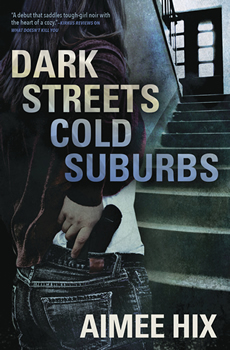 Trying to help a teen in peril proves to apprentice PI Willa Pennington that sometimes home is the most dangerous place of all.

People move to the suburbs for a better life—nice houses, good schools, safe communities. But there’s no place you can go that’s completely safe from danger. Willa Pennington knows this all too well after her first PI case almost got her killed. Helping her old mentor review a decades-old cold case seems much safer. Then she reaches out to a teenager in trouble, and suddenly a new case rips into Willa’s life in a way she could have never predicted. It seems menace is always lying in wait behind someone’s door. Especially on the dark streets of the cold suburbs.

Author Aimee Hix spent some time with The Big Thrill discussing her latest thriller, DARK STREETS COLD SUBURBS. Here’s what she had to say:

Stalking is one of the main themes and it’s a subject that is complicated so the press it gets is usually rather scattered. It’s much more common than most people believe.

I wrote the book while I was sick with vertigo. I was surprised that it turned out well considering how seriously ill I was.

Main characters discover secrets about their past that open the door to bigger mysteries than they’d ever contemplated.

I read Nancy Drew as a child and returned to the genre with Carolyn Hart’s Death on Demand. Then I greatly expanded my reading. I fell in love with the concept of diving deep into mystery and thrillers.

A perspective of what the other side of life in the suburbs is like. 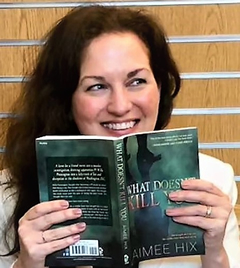 Aimee spent twenty years working as a federal contractor, so she spent a lot of time contemplating murder. It made total sense that once she retired she would devote her whole life to it. Fictional murder, of course.

She is a native of Northern Virginia and so she truly understands the trials and tribulations of her main character, Willa Pennington, an apprentice PI starting her new career in the Starbucks-laden, decidedly non-gritty streets of Fairfax County.

Aimee lives in Virginia her family, three dogs, and all her killer thoughts. You can visit Aimee on her website.

The Alchemist's Illusion by Gigi Pandian