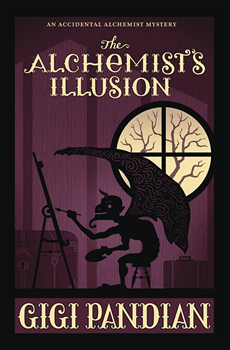 Centuries-old alchemist Zoe Faust is tired of running from her past. She’s finally got her life on track in Portland, Oregon, gardening and cooking in her fixer-upper house with her mischievous best friend, Dorian the gargoyle chef. It seems like the perfect life for Zoe—until she discovers that her old mentor Nicolas Flamel, who she thought had abandoned her, has been imprisoned.

A local artist holds the secret that could lead Zoe to her mentor, but the artist is murdered and the painting containing the hidden clue is stolen. To rescue Nicolas, Zoe and Dorian must explore art forgery, a transformative process that has much in common with alchemy and cooking—but one that proves far more dangerous.

Award-winning and USA Today bestselling author Gigi Pandian took some time out of her busy schedule to discuss her latest paranormal thriller with The Big Thrill, THE ALCHEMIST’S ILLUSION:

I’ll share a secret: When I was trying to figure out where the Accidental Alchemist mysteries would take alchemist Zoe Faust and gargoyle Dorian Robert-Houdin, their characters were so real to me that I was having trouble forcing them to conform to the plot I had in mind. Then I attended the Art of Alchemy exhibit at the Getty Museum, and a plot involving art forgery and the parallels between art and alchemy clicked into place. In THE ALCHEMIST’S ILLUSION, hidden messages in works of art are a key part of the mystery. The plot then drove the story forward with dual mysteries, past and present, set in Prague and Portland.

THE ALCHEMIST’S ILLUSION is a not-quite-cozy paranormal mystery. I love reading paranormal mysteries because authors writing in the genre have such terrific imaginations, but I never thought I’d write one myself. I began writing the Accidental Alchemist mysteries while going through chemotherapy, so this whole series is my way of exploring ideas of transformation and the Elixir of Life.

I’m not sure there are any other mystery-solving gargoyle chefs out there, which is both a challenge and an opportunity. Dorian the gargoyle was once stone, carved as a prototype for the Cathedral of Notre Dame in Paris and accidentally brought to life through alchemy. I wanted to have the impish creature be lovable and believable. He was meant to be the comic relief sidekick to alchemist Zoe Faust, but Dorian quickly became the heart of the series. In THE ALCHEMIST’S ILLUSION, I wanted to take what could have been an unbelievable premise and have the characters so true to life that that new readers would immediately connect. 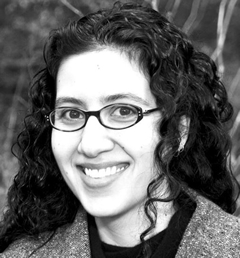 USA Today bestselling and Agatha Award-winning author Gigi Pandian is the child of cultural anthropologists from New Mexico and the southern tip of India. She spent her childhood being dragged around the world on their research trips, and now lives in the San Francisco Bay Area. Gigi writes the Jaya Jones Treasure Hunt Mystery Series, the Accidental Alchemist mysteries, and locked-room mystery stories. Gigi’s debut mystery novel, Artifact, was awarded a Malice Domestic Grant and named a “Best of 2012” Debut Novel by Suspense Magazine. Her fiction has been awarded Rose, Lefty, and Agatha Awards.

To learn more about Gigi and her work, please visit her website.