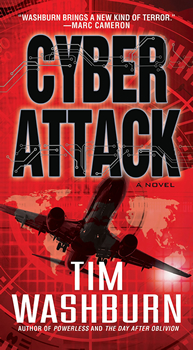 The years that author Tim Washburn spent working in the television business are demonstrated in the cinematic scope and feel of his thrillers, which feature the struggle for survival in the face of cataclysmic disasters. Some of these disasters come compliments of Mother Nature, others from human machinations. But all are disturbingly plausible.

Perhaps his penchant for high-octane, high-adrenaline subject matter comes from living in the heart of Oklahoma’s Tornado Alley. Maybe he writes in order to make sense of a world where the combination of political unrest and increasingly sophisticated technology can seem like a giant Damocles’ sword poised over us all. Or maybe, like so many of us, he just likes a good, heart-pounding read.

In CYBER ATTACK, that’s exactly what Washburn delivers. It’s a plot-driven book that involves a lot of complex technology, but the technical information never overshadows or bogs down the story. Achieving that balance is no easy task—especially for an author without a high-tech background.

“I do extensive research for all of my novels,” Washburn says. “I’ve had friends say, ‘You’re writing fiction, make it up.’ Even though we do write fiction I think the readers expect us to get the details right. I want that in the books that I read, and it’s also something I strive for in my own work. There’s a fine line you have to navigate, or the story gets bogged down in the details. I try to be accurate about the technology I do include, yet I try to use it as sparingly as possible. When I started CYBER ATTACK, I knew very little about hacking or computer networks or computer viruses or a zillion other things. Now I wish I didn’t know half of what I now know!”

Asked about his journey as a writer, Washburn says, “I’m a late bloomer.  With a journalism degree, I’ve always done some type of writing, but it wasn’t until I was 49 that I began thinking seriously about writing a novel.”

In addition to doing an occasional freelance job, he was also a stay-at-home dad and the chauffeur for his three children. “When our youngest daughter started driving and I no longer had to endure those long drop off/pickup lines at school, I began writing. After three years of rejections and four novels that will never see the light of day, I finally found my groove.”

And his tribe. Knowing that writers need to network with readers and with other writers, Washburn is a member of the International Thriller Writers and the Authors Guild.

Here, he talks about what inspired his thrilling new release, CYBER ATTACK, and what readers can expect from him next.

CYBER ATTACK is based on a pretty terrifying concept. Where did you get the inspiration?

We’re bombarded almost daily by news stories about data breaches, stolen data, and cyber attacks. I’d toyed with the idea for a while and when I started researching the topic, what I found frightened me. Foreign governments already have access to most of our power grids and computer networks and, with a couple of keystrokes, can turn out the lights for millions of Americans. Of course, we also have access to their power grids and computer networks, but who knows how long the cyber détente will last? Unfortunately, that’s not the only concern. Hackers can not only steal your data, they can also access most of those internet-connected devices that we can’t seem to live without.

Why did you decide on multiple third-person points-of-view for this book? What does it allow you to do that you could not have done using a single viewpoint?

All of my books are written in that same format. For me it creates a sense of urgency and, I think, adds a deeper layer to the story along with speeding up the pace. I rely on short chapters and multiple points of view to drive the story forward.  I don’t know that I could sit down and write a book with only one point of view where the same story line continued chapter after chapter.

What makes your protagonist, FBI Special Agent Hank Goodnight, well suited to be the hero of a techno-thriller?

Hank grew up in a small farm town in Oklahoma. It was only through humility, hard work, and dedication that he made it to the FBI. Those three traits are common among people everywhere who have to work hard to scratch out an existence. Hank also has another unique ability that I’ll let the readers discover on their own.

You treat the primary antagonists with a great deal of empathy. How did you get inside the minds of people capable of such extreme actions?

They might be the bad guys, but they’re also humans with similar wants and needs.  Nobody wants to read about a character who has no redeeming values, or at least I don’t want to read that. Yes, they’re capable of doing evil things and, unless they’re complete psychos, usually have a motive for doing what they do. It may not be a motive shared by many others or that others might find as generally acceptable, yet to them it’s a valid reason.  My antagonists had a very definitive reason for taking the actions they took.

CYBER ATTACK is your fourth thriller to date. Have you noticed a difference in your writing process from one book to the other?

My writing process is basically the same. I sit down at the computer every morning wondering what is going to happen to my characters on that particular day. I do no outlining and very little planning. What has changed is the quality of my work. My dialogue, phrasing, and pace get better with every word I write.

Okay, imagine you could be a literary Obi-wan for a little while. What advice would you give to aspiring and pre-published writers?

Rejection will become a big part of your life and that’s okay. Use it as motivation. Persistence is the key. You must never give up, but you also have to keep moving forward. If you’re currently querying an agent for a book you’ve written, use the down time to write the next one. And if you’ve spent more than a year querying without results, put your manuscript in the drawer and write another, then another. Keep writing. You’ll get there eventually.

And when you do get there, please take advantage of the ITW’s debut author program. It was the best decision I made. 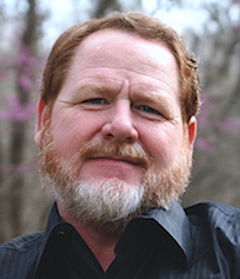 Tim Washburn is the author of Powerless, Cataclysm, The Day After Oblivion, and CYBER ATTACK. When not devising new death and destruction scenarios, Tim can be found most Saturday afternoons in the fall cheering on his Oklahoma Sooners. A father of three, Tim and his wife live in central Oklahoma, the heart of Tornado Alley. Tim Washburn is a member of the International Thriller Writers and the Authors Guild.