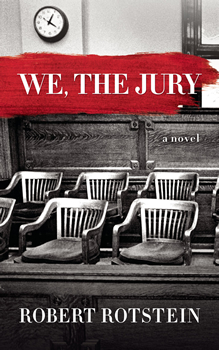 Robert Rotstein is back with his latest legal thriller, WE, THE JURY. Hailed as a must-read by New York Times bestselling author Steve Berry, WE, THE JURY is a riveting tale told from the perspective of individual jurors involved in a horrifying murder trial involving alleged domestic violence.

On the day before his 21st wedding anniversary, a man buries an ax in his wife’s skull. Now, the jurors assigned to his trial must decide whether the accused is a cold-blooded murderer—or whether he was a battered spouse who killed his wife in self-defense.

In an age of media sound bites and incendiary tag lines, some would say we’ve never had more information at our fingertips—yet have never been less informed. Given the current climate, Rotstein’s novel—which deals with public perception and the often-blurred lines between truth and fiction—seems especially timely.

Rotstein says the idea for WE, THE JURY came after he sat on a jury for the first time. “After the trial, I started exploring a modern-day jury-deliberation story. I’ve always admired Twelve Angry Men, but that’s a play/movie, so the audience isn’t inside the jurors’ heads. I wanted my novel to get inside the jurors’ heads. I re-read William Faulkner’s As I Lay Dying, which has over a dozen first-person narrators. Once I adopted that structure, I was off and running, finishing a first draft in six weeks.”

Rotstein agrees that the jury room is a perfect place for exploring those blurred lines between truth and fiction.

“Lawyers get paid for trying to convince a jury to adopt one competing version of the truth over another,” he says. He points out that the jurors—ordinary citizens—supposedly base their verdict on the “truth.” “But their view of what’s true is colored by their pre-existing biases and life experiences,” he says. “In the end, most people try to do the right thing. The problem is that, all too often, the ‘right thing’ is just as elusive as the truth.”

In WE, THE JURY, Rotstein skillfully uses preconceptions to pull in the reader. From the start, the reader is caught off-guard, forced to examine her or his own biases. “I play against type a lot in the novel,” he says. “The alleged battered husband is a physically strong man; his lawyer is female; the prosecutor is male. Anomalies—just like in real life and law—cause confusion and foster indecision.”

Indeed, the structure of the novel, which places the reader in the midst of the trial, serves to strengthen the sense of immediacy and involvement. The reader feels like one of the jurors, an outcome that Rotstein planned.

“That’s one reason I used the multiple-narrator technique, told the story in the present tense, and conceived of a title that has the word we in it,” he says. “The reader is also able to understand the hidden, and often dark, reasons why jurors behave and decide as they do.”

The multiple-narrator technique requires great attention to craft—especially when a novel involves more than a dozen first-person narratives. Rotstein pulls it off well and convincingly.

“Ensuring that the characters had different voices was challenging,” he admits. “To make a particular character’s voice consistent, I read chapters aloud to myself and others, showed pages to my editors, and printed out each of the character’s chapters and read them separately from the rest of the book. I also gave the characters very different backgrounds and characteristics, which helped me keep them straight naturally.”

This attention to detail is apparent in the characters themselves. WE, THE JURY is both a legal thriller and a compelling study of human psychology. The characters are complex, and their perspectives and emotional reactions ring true, especially considering the crime in question.

“I did extensive research on the law governing the battered-spouse defense and on the psychology of abuser and victim,” Rotstein says, “especially when the abuser is female. The judicial cases, to put it mildly, are not clear-cut—which is a bad thing for the law but a good thing for a novelist.”

Rotstein is no stranger to legal research. As an intellectual property attorney who has represented all the major movie studios and record companies, as well as well-known directors and writers, he’s familiar with trial proceedings, and his background certainly influences his legal thrillers. New York Times bestselling author James Patterson said, “WE, THE JURY has what most legal thrillers lack—total authenticity, which is spellbinding.”

This authenticity shines through, although Rotstein says his legal background not only influences what he writes, but how he writes. “I approach the process of writing a novel the same way I approach writing a legal brief. I set a deadline, put something down on paper whether I feel like it or not (that’s what we do in our jobs), and edit the rough draft, knowing from experience that the editing process will get rid of the roughness. There’s something to be said for demystifying the writing process.”

Rotstein’s ability to approach writing in such a professional manner was surely welcome when working with James Patterson on The Family Lawyer, the story they co-wrote for a collection by the same title, which was released in 2017.

“It was a pleasure working with James Patterson and a wonderful learning experience,” Rotstein says. “I’m grateful for the opportunity he gave me and his support for WE, THE JURY. I actually didn’t find the collaborative process difficult. Lawyers write collaboratively with colleagues and clients all the time, so I’m accustomed to that process.”

When it comes to process, Rotstein knows how to court the muse. He’s neither a hardcore outliner nor a complete fly-by-the-seat-of-his-pants plotter. “On the spectrum between plotter and panster, I’m somewhere in between. (Does that make me a planster?)”

He takes long walks, thinks about the idea, and waits for the characters’ dialogue to pop into his head. “Usually, I’ll have a beginning and ending in mind before I put fingers to keyboard. Once I start writing, I’ll plan out four or five chapters, write them, plan another four or five, and so on, until I reach the end.”

WE, THE JURY was released in October, but thankfully fans can look forward to a new Rotstein thriller in the near future. “I’m writing a novel about two lawyers, a husband and wife, who travel the country representing clients in controversial, high-profile cases,” he says. “In this next book, the client is a pregnant woman who’s made a seemingly inexplicable medical decision that threatens the life of her unborn baby.”