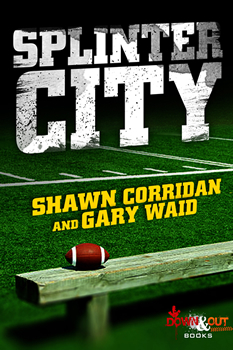 After nearly two decades in prison, high school gridiron great Dan Parrish returns to his hometown in rural Kansas with nothing more than a duffle bag and a desire to quietly get on with his life.

But picking up the pieces in a place where he was once revered isn’t as easy as he hoped, especially for a convicted felon in the Bible Belt. And in no time Dan has landed squarely in the crosshairs of an old high school nemesis, the unctuous Judge Rick Hunter who warns Dan to “leave Echo now or be sent back where you came from.”

When Dan is offered a dream job—a coaching staff position with the Echo Junior College football team—he must decide between accepting the offer and risking his newfound freedom, or leaving Echo, tail between his legs, and breaking the promise he made to his dying father.

Meanwhile, Dan is falling fast for his college professor, a beautiful but enigmatic outsider who challenges him to stay in Echo. And in an odd twist of fate, Parrish’s final decision results in an outcome that splashes his name and face across every county news outlet in Kansas, forcing the former star to face off against his two most formidable adversaries: his age and his checkered past.

The Big Thrill caught up to co-authors Shawn Corridan and Gary Waid to discuss their collaboration, SPLINTER CITY:

As a thriller, I believe SPLINTER CITY delivers heightened feelings of suspense, excitement, surprise, anticipation and anxiety to our readers. In addition we’ve woven in cliffhangers and plot twists to keep our readers on the edge of their seats both at home and in the stands of the football games that play out between the pages.

Despite the backdrop – small town junior college football – women love this story as much or more than men.

Our protagonist Dan Parrish is both an ex-con and a former star footballer. Gary Waid and I are, too!

Shawn Corridan grew up in the shadow of Cape Kennedy, his father a NASA engineer. A high school football star as well as a surfer, he attended the University of Hawaii on a football scholarship and for the opportunity to surf the North Shore. After graduation, he got married, traveled the globe, sailed the Caribbean, was rescued by the Coast Guard twice, wrote market research reports for Wall Street, and worked in pharmaceutical sales. Corridan also won the Final Draft Big Break Screenwriting Contest and is a member of the Writer’s Guild. He divides his time between Los Angeles, Honolulu and Merritt Island, Florida.

Born a navy brat in San Diego, Gary Waid has done almost everything there is to do in the water, from commercial fishing to operating tugboats to repairing yachts. He has also been a roofer, a carpenter, a musician, a tractor-trailer driver, a writer for magazines—as well as a guest in the federal prison system for smuggling marijuana. Waid lives in Cape Canaveral, Florida on a sailboat with his wife, Patty, and their two dogs.