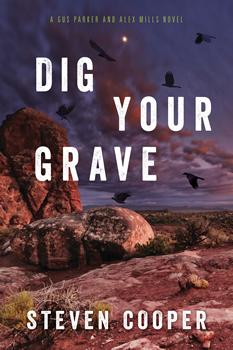 A killer is on the loose, burying his victims among the dead in Phoenix cemeteries, and leaving ghoulish signs that warn of more evil to come. It’s a crude camouflage that has Detective Alex Mills stumped. As he has done before, Mills turns to his buddy, the reluctant psychic Gus Parker. His visions, as cryptic and baffling as they sometimes are, mean something.

But just as the investigation heats up, and Mills needs him most, Gus Parker goes missing. Rock ‘n’ roll legend Billie Welch, Gus’s love interest, is frantic to find him and turns to Mills for help. Is this a case of a crazed fan who is trying to get to Billie? Is Gus’s disappearance related to the spree of cemetery killings?

There are nefarious secrets hiding in the shadows of the valley’s most well-heeled neighborhoods, and some of the most prominent residents have the most to fear.

The Big Thrill caught up to author Steven Cooper to discuss his second novel featuring Gus Parker and Alex Mills, DIG YOUR GRAVE:

I hope readers appreciate the malignancy of secrets. Secrets make us do terrible things in life, leave us compromised, haunt us when we least expect. I also hope readers enjoy another journey into the desert and into the lives of Alex Mills and Gus Parker. The desert harbors secrets of its own.

The novel gives the genre two characters who are buddies but who are also diametrically opposed to each other. One character is a man of reason and law; the other is a spiritual guru who takes his cues from the cosmos. Somehow they work together, and work together well, to tackle crime.

I sadly discovered how much the city of Phoenix is allowing developers to chew into the beauty of Camelback Mountain. I could not believe how many home sites were under construction the last time I drove up the south side. It was an unpleasant surprise.

The story, in some ways, echoes a real case from long ago. I can’t say any more than that.

As a child growing up in Boston, I was a huge fan of Robert B. Parker. Book after book, he stated to feel like an old uncle to me. I knew then I wanted to be a writer. John Irving, though not a crime writer, is a gifted storyteller. He taught at my university way back when, and his work clearly inspired and influenced me. I’ve always been a fan of John Le Carré. But my tastes are eclectic. I love Carl Hiaasen, Sara Paretsky, J. A. Jance, and more. Many more. 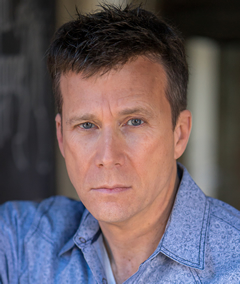 Steven Cooper is the author of Desert Remains, the first Gus Parker and Alex Mills novel, and three previous novels. A video producer and a former television reporter, he has received multiple Emmy awards and nominations, a National Edward R. Murrow Award, and Associated Press awards. He taught writing at Rollins College (Winter Park, FL) from 2007 to 2012.