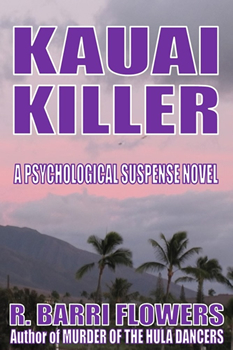 KAUAI KILLER will take readers from life on the mainland to the beautiful paradise of Hawaii in a suspenseful and psychological domestic drama of love, obsession, vengeance, and murder.

Ian Butler, 35 and a successful stockbroker, loved his gorgeous wife Suzanna, who was three years younger, and wanted nothing more than to see her get past unwarranted fears of infidelity on his part. But after doing a colleague an innocent favor, Ian’s life turns upside down in ways he could never have anticipated in his worst nightmares.

Suzanna is shot to death in their home and Ian is arrested and charged with her murder, implicated by the victim herself in a 911 call. Though the evidence points toward guilt, a good defense lawyer wins him an acquittal.

Relocating to Kauai, Hawaii, Ian starts a new career as a writer of financial thrillers and begins a relationship with an attractive artist named Jeri Chen, while keeping his painful past where it belongs.

Unbeknownst to Ian, Jeri has secrets of her own. With a new identity, she is on the run from a hitman working for a notorious Dallas, Texas, drug kingpin. She wound up on Kauai, where life was laid-back and people minded their own business.

But the past found a way to catch up to both of them in ways neither could have expected, placing their lives in danger and their future in doubt.

I hope readers will take away from the book a better feeling for the relationship between infidelity and jealous rage that can lead to murder. In many instances, jealousy is seen as harmless and even desirable in a mate. But in this novel, it turns into obsession and spirals out of control in ways the protagonist could never have imagined.

It takes domestic thriller and psychological suspense to a different level in focusing on the destructive ways that infidelity — real or imagined — can emerge and wreak havoc in different ways.

There is also an element in the book that looks at drug trafficking and its deadly impact on society as a subplot.

In doing research for the plot, I went to my own nonfiction true crime anthology, Jealous Rage, to keep the novel credible in its storyline. I was surprised that in the process, I was able to uncover deeper layers to the characters and what made them tick in relation to the main themes of the novel. I am sure readers will be riveted with the twists and turns and conclusion.

The book will make people think more about unfaithfulness in marriages and how this can have an adverse effect on the relationship in more ways than one — making one pause for thought where it concerns betraying a spouse or partner.

Many authors and books have influenced me throughout my writing career.

Books include 84, Charing Cross Road, Valley of the Dolls, The Grapes of Wrath, and Far From the Madding Crowd.

Fiction titles include A Reason to Live, Before He Kills Again, Dark Streets of Whitechapel, Dead in Pukalani, Dead in Kihei, Deadly Defense, Forever Sweethearts, Fractured Trust, Graduate Circles, Justice Served, Killer in The Woods, Murder in Maui, Murder in Honolulu, Murdered in the Man Cave, Murder on Kaanapali Beach, Persuasive Evidence, Seduced to Kill in Kauai, and State’s Evidence.

True crime titles include Murder of the Horse Trainer’s Rival, Murdered by the King of Western Swing, Murder During the Chicago World’s fair, Murder of the Doctor’s Wife, The Sex Slave Murders 1, 2, and 3, The Pickaxe Killers, Murder at the Pencil Factory, Murder of the Banker’s Daughter, Killers of the Lonely Hearts, Dead at the Saddleworth Moor, and The Dreadful Acts of Jack the Ripper and Other True Tales of Serial Murder and Prostitutes.