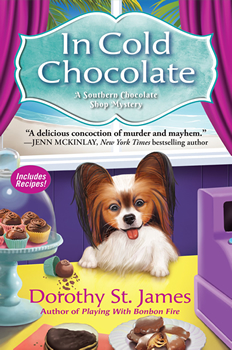 In Dorothy St. James’s third delectable Southern Chocolate Shop mystery, a new batch of chocolate and troubles of the heart cause a string of disasters for The Chocolate Box’s new owner, Charity Penn.

The vintage seaside town of Camellia Beach, South Carolina, seems like the perfect place for romance with its quiet beach and its decadent chocolate shop that serves the world’s richest dark chocolates. The Chocolate Box’s owner, Charity Penn, falls even further under the island’s moonlit spell as she joins Althea Bays and the rest of the turtle watch team to witness a new generation of baby sea turtles hatch and make their way into the wide ocean.

Before the babies arrive, gunshots ring out in the night. Cassidy Jones, the local Casanova, is found dead in the sand with his lover Jody Dalton—the same woman who has vowed to destroy The Chocolate Box—holding the gun. It’s an obvious crime of passion, or so everyone believes. But when Jody’s young son pleads with Penn to bring his mother back to him, she can’t say no. She dives headfirst into a chocolate swirl of truth and lies, and must pick through an assortment of likely (and sometimes unsavory) suspects before it’s too late for Penn and for those she loves in Dorothy St. James’s third rich installment of the Southern Chocolate Shop mysteries, IN COLD CHOCOLATE.

I hope the reader sits on the edge of their seat while flipping pages while being immersed in the rhythm of the Lowcountry and learning about how special sea turtles are to our world.

IN COLD CHOCOLATE pushes the limits of the cozy mystery genre by adding thriller elements and by including a dynamic main character who learns new lessons and grows within each book of the series.

Elizabeth Peters and Catherine Coulter are two major influences in my writing life. While their books are exciting, their characters explode to life on the page and have stuck with me for years after reading their books. I hope one day to gain a thimbleful of their writing skills. 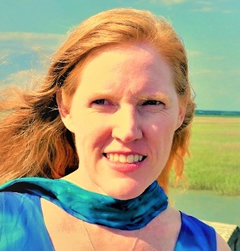 A lover of puzzles and perhaps a bit too nosy about other people’s lives, Dorothy St. James is a former beach bum, living just outside Charleston, South Carolina. She has degrees in wildlife biology and public administration and as an urban planner, worked for many years telling the stories of small Southern towns. Dorothy enjoys writing both cozy mysteries and romance. Her works have been nominated for many awards including the Southern Independent Bookseller’s Alliance Southern Book Prize, Romantic Times Reviewers’ Choice Award, Reviewers International Organization Award, National Reader’s Choice Award, CataRomance Reviewers’ Choice Award, and The Romance Reviews Today Perfect 10! Award. Reviewers have called her work “amazing,” “perfect,” “filled with emotion,” and “lined with danger.”

To learn more about Dorothy and her work, please visit her website.