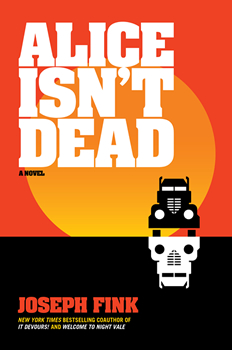 Keisha Taylor lived a quiet life with her wife, Alice, until the day that Alice disappeared. After months of searching, presuming she was dead, Keisha held a funeral, mourned, and gradually tried to get on with her life. But that was before Keisha started to see her wife, again and again, in the background of news reports from all over America. Alice isn’t dead, and she is showing up at every major tragedy and accident in the country.

Following a line of clues, Keisha takes a job with a trucking company, Bay and Creek Transportation, and begins searching for Alice. She eventually stumbles on an otherworldly conflict being waged in the quiet corners of our nation’s highway system—uncovering a conspiracy that goes way beyond one missing woman.

New York Times bestselling author Joseph Fink took time out of his schedule to discuss ALICE ISN’T DEAD, the novel that expands on the story told in the hit podcast of the same name which has had over 6 million downloads in its first 10-episode season:

ALICE ISN’T DEAD is not your typical thriller. It’s a mash-up of several genres: horror, SF/fantasy, thriller, and more. I don’t think my writing either for the podcasts or the novels can be put in a box and I think that my fans and readers appreciate that. My books also cross over to the YA audience–when I do signings and live shows, we have a very large teen audience.

My character Keisha’s anxiety is my own. I’ve struggled with anxiety for my entire life, and I wanted to create a character that embodied that same type of anxiety. Writing about it in fiction has been helpful for me. I write about this in a letter to readers that is at the front of the galley for my book.

From an interview I did for Vulture:

Deb Olin Unferth’s Vacation: It’s this book about this guy who is following his wife and discovers that she’s following another guy and ends up following the other guy out of the country to Central America. It’s a book that starts very strange and eventually by the end is basically working on dream logic. So much of the style of language of “Night Vale” comes directly from Deb Olin Unferth — the way she will start paragraphs and end them in a completely different place than you expected.

Thomas Pynchon: I love his use of conspiracies that go nowhere and directionless paranoia and building these hidden bureaucracies that don’t actually mean anything as a way of reflecting the kind of confusing and meaningless nature of the world. 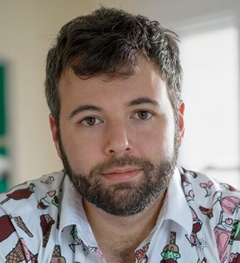 Joseph Fink is the co-author of the New York Times bestselling novels It Devours! and Welcome to Night Vale. He created the Welcome to Night Vale and Alice Isn’t Dead podcasts, heads up the Night Vale Presents podcast network, and his new novel ALICE ISN’T DEAD publishes on October 30th in hardcover from Harper Perennial. He lives with his wife in New York.