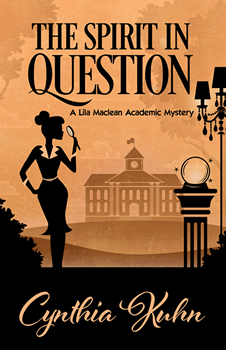 English professor Lila Maclean knew drama would be involved when she agreed to consult on Stonedale University’s production of Puzzled: The Musical.

But she didn’t expect to find herself cast into such chaos: the incomprehensible play is a disaster, the crumbling theater appears to be haunted, and, before long, murder takes center stage.

The show must go on—yet as they speed toward opening night, it becomes clear that other members of the company may be targeted as well. Lila searches for answers while contending with a tenacious historical society, an eccentric playwright, an unsettling psychic, an enigmatic apparition, and a paranormal search squad.

With all of this in play, will she be able to identify who killed her colleague…or will it soon be curtains for Lila too?

Award-winning author Cynthia Kuhn took time out of her busy schedule to meet with The Big Thrill and discuss the latest installment of the Lila Maclean Academic Mystery series, THE SPIRIT IN QUESTION:

First and foremost, I hope that they’ll enjoy the reading experience. The book also raises issues related to the process of interpretation on various levels and to the preservation of historical places that I hope prove interesting to readers.

1) There are several opera houses/theaters built in the 19th century that are still standing in Colorado–some have been repurposed in fascinating ways.

Influences would include the Nancy Drew and Trixie Belden books for sure, and authors like Agatha Christie, Dorothy L. Sayers, Amanda Cross (Carolyn G. Heilbrun), among others. I learned about genre conventions, pacing, and so much more from reading them. 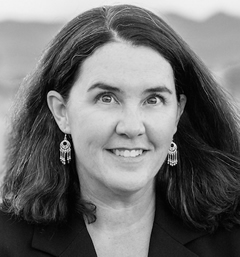 Cynthia Kuhn writes the Lila Maclean Academic Mystery series: The Semester of Our Discontent, an Agatha Award recipient for Best First Novel; The Art of Vanishing, a Lefty Award finalist for Best Humorous Mystery; and THE SPIRIT IN QUESTION. She is professor of English at Metropolitan State University of Denver and serves as president of Sisters in Crime-Colorado.