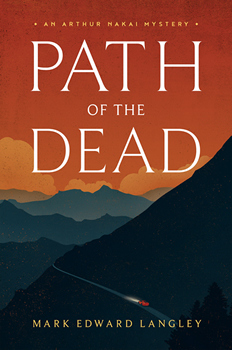 Ex-marine Arthur Nakai spent years as a member of the Shadow Wolves, an ICE tactical unit tasked by the US government to hunt human traffickers and drug smugglers on the US/Mexico border. He put that life of confronting violence in the darker contours of the desert landscape behind him and settled into a quiet existence in New Mexico with his wife, Sharon, a local TV reporter.

But when Sharon goes missing after crossing paths with a serial killer who has just added to his list of young victims, Arthur’s calm world is shattered. He must return to the darkness of the life he left behind in order to save what matters most to him, and the future he and his wife plan to share together. He can only hope that she is still alive, and that his skills will be enough to find her. So begins the hunt — to find a ruthless killer and save the love of his life.

The Big Thrill caught up with author Mark Edward Langley to discuss his debut novel, PATH OF THE DEAD:

I hope that my readers will gain a new understanding of the people that occupy the Southwest. I hope that they will learn that the native cultures that live there are not that much different from them; that they struggle with some of the same problems and daily stresses that we all do, while sharing with them the current events that are shaping that area of the United Sates that are not covered on the nighty news, but are just as important to this country.

I hope that it enlightens readers. It does not candy-coat the Native American as it has been in the past. It reveals current events that effect their lives on a daily basis.

I was surprised by the Shadow Wolves as part of ICE. I did not know that they existed, let alone what they were responsible for as part of Homeland Security.

It is the story of two men, really. Both were raised on reservations; both could have turned out totally opposite depending on living conditions and how they were raised. One is a devoted husband, the other a sadistic killer. 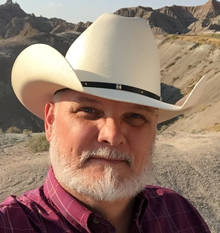 Mark Edward Langley has always been one to tell stories. From a young age he kept other kids enthralled as he crafted stories that would keep them riveted for days. When he grew older, he took a job at a bookstore where he began reading Robert B. Parker, Mickey Spillane, John D. McDonald, Ernest Hemingway, and Tony Hillerman; more recently, he began reading Craig Johnson of Longmire fame, an author he would also come to know personally. After first setting foot in the Four Corners area, he began creating a cast of characters that would someday inhabit that world. After immersing himself in the land and the Navajo culture, he began to gain a deeper understanding and more spiritual connection. The result of that understanding and connection became the basis of his first novel, PATH OF THE DEAD, published August 14th, 2018. Mark is currently working on the next novel in the Arthur Nakai Mystery Series, Death Waits in the Dark. Look for it August 2020 from Blackstone Publishing!