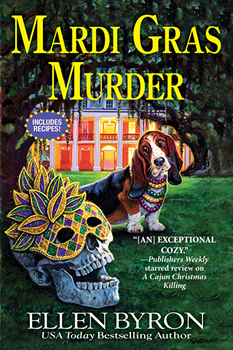 MARDI GRAS MURDER, Book Four in USA Today bestselling author Ellen Byron’s Cajun Country Mystery series, dishes up a zesty jambalaya of Louisiana charm and darkness. Byron melds quirky but endearing small-town characters, humor, and a twisty who-done-it with a touch of danger into a story fans are sure to devour.

The Cajun Country Mysteries have been nominated for Agatha, Daphne, and Lefty awards. The second in the series, Body on the Bayou, and the third, A Cajun Christmas Killing, won Lefty awards for Best Humorous Mystery.

Among the praise for these books, Publisher’s Weekly said in a starred review, “There’s no end to the mischief and mayhem.” Suspense Magazine wrote, “Not only is the story a whole lot of fun to read, with a historical plantation setting, but there are also mouthwatering recipes.”

In the upcoming MARDI GRAS MURDER, a hundred-year flood on Bayou Beurre serves up a body with a fatal gunshot wound on the shore at the Crozat Plantation Bed and Breakfast. No one in Pelican, Louisiana knows who it is, but Maggie Crozat, daughter of the plantation owners who run the B and B, feels responsible to identify the victim and find out who in her Spanish moss-festooned environs would want him dead.

With plenty of her father’s gumbo to fuel her, Maggie juggles her job as a tour guide at another plantation, the restoration of a mysterious painting she feels may hold a clue to the murder, her role as a judge in the Miss Pelican Mardi Gras Gumbo Queen Pageant, and her not-so-perfect relationship with her boyfriend, Pelican Police Detective Bo Durand.

Besides her mother, father, and grandmère, Maggie has her friends Gaynell and Ione to help her, along with the Pelican PD and a variety of other entertaining characters.

The Big Thrill caught up with Byron recently to talk about her work.

One of the first things you notice about Byron is her enthusiasm, even over the phone after a long day of meetings. Well, no wonder. In addition to the upcoming launch of MARDI GRAS MURDER on October 9, she’s sold a second series, the Catering Hall Mysteries, to Kensington. Plus, she wants to do more work in TV.

Byron says she fell in love with New Orleans and the Cajun culture upon becoming a student at Tulane. After college, she started her career as a playwright in her native New York City. Her play, Graceland, and a companion piece won awards for Best Short Plays of the 1980s. Another play was a finalist for the Eugene O’Neill award. She also forged a career as a freelance writer, penning celebrity interviews for Glamour, Redbook, and other magazines.

After relocating to Los Angeles, she found work writing for TV and worked on several popular shows, including Wings, Just Shoot Me, and Still Standing, as well as the Nickelodeon hit Fairly OddParents. She remains interested in writing for TV. An earlier novel manuscript won the 2013 William F. Deeck-Malice Domestic Grant for unpublished mystery writers. Hard work has shaped her career.

Bryon says her fascination with all things Cajun started in college with the people, the food, the legends, and most of all, the culture. As an example, she cites Oak and Pine Alley, a tree-lined road in St. Martin Parish surrounded by sugar cane fields. Legend has it a wealthy plantation owner planted the trees. For his daughter’s wedding he had a carriage canopied with spider webs and covered with silver and gold dust, so she could ride down the allée of trees in style.

“I have practically an entire bookshelf of books about the area,” Byron says.

Her Cajun Country Mysteries feature Louisiana traditions, such as bonfires on the New Orleans levee, the Courir de Mardi Gras, or Mardi Gras run, and the batture, the alluvial land between the Mississippi River and the levee. She notes, “Mardi Gras is the name of the event, but it’s also a name for the participants.” MARDI GRAS MURDER features a colorful Courir.

She also stirs serious themes, such as class, racism, homophobia, and anti-Semitism, into the plot of MARDI GRAS MURDER. “I really like to touch on themes that are true to today’s environment. South Louisiana is a very mixed culture, and I love that.” For example, one of her characters, Robbie Metz, talks about how he loves Pelican, but thinks he has to work harder to be accepted, because he’s “different.”

From reading this book, Byron hopes readers will feel they are having a “vacation with murder” and will feel like justice is served. She hopes they will learn something about the area and want to visit sometime.

When asked what drew her to writing cozies, she says, “A very simple fact that I cannot write sex scenes. In fact, I’m so bad at it, my characters consummate their relationship between books.”

One of the challenges of writing cozies is that the amateur sleuth may be seen as more effective than the police. “I have to give the police realistic obstacles that prevent them from solving the case before my sleuth does,” Byron says. To make the police accept Maggie, Byron gave her a police detective as a love interest and “this being south Louisiana, a family pedigree.”

What’s next for Byron? After MARDI GRAS MURDER, two more Cajun Country Mysteries are in the works, with the next to be published in 2019. She hopes to continue the series beyond her current contract. The first Catering Hall Mystery, Here Comes the Body, inspired by family-owned catering halls in New York, will be published in 2020. 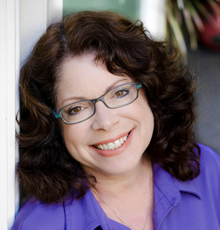 Ellen Byron, author of the Cajun Country Mystery series, is perhaps best known as a former cater-waiter for the legendary Martha Stewart, a credit she never tires of sharing. A Cajun Christmas Killing and Body on the Bayou both won the Lefty Award for Best Humorous Mystery and were nominated for Agatha awards in the category of Best Contemporary Novel. Plantation Shudders was nominated for Agatha, Lefty, and Daphne awards. Mardi Gras Murder is available for presale. Ellen’s TV credits include Wings, Just Shoot Me, and Fairly OddParents. She’s written over 200 national magazine articles, and her published plays include the award-winning Graceland. A native New Yorker, Ellen now lives in the Los Angeles area with her husband, daughter, and two spoiled rescue dogs.