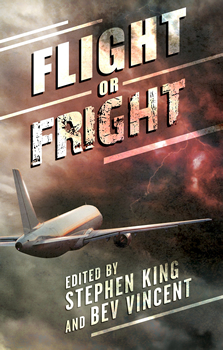 No mode of transportation has inspired more awe than flight—or more terror, when you consider the countless things that can go wrong when you’re trapped in a highly combustible tube suspended 30,000 feet above the ground.

We can conjure up plenty of flight-themed horror stories without any help from fiction writers, so authors who tackle the subject might have the deck stacked in their favor. That’s never been more evident than in FLIGHT OR FRIGHT, a new anthology edited by Stephen King and Bev Vincent (out this month from Cemetery Dance Publications). The volume collects 17 “turbulent tales” culled from more than a century of aeronautical horror, including new, never-before-published contributions from King and Horns author Joe Hill.

The concept for the anthology was born last summer, when King, Vincent, and several associates were gathered in Bangor, Maine, for the premiere of The Dark Tower.

“It was so surreal,” says Vincent. “We were in Bangor, eating at a diner across the road from the airport, with people from Sony and King’s office, some of his friends and family as well, when King dropped this idea on [Cemetery Dance publisher] Richard Chizmar and me. I think he heard some horror stories about people’s adventures in getting to Bangor as he mingled with attendees. He was really enthusiastic about the idea, and I was flattered that he asked me to work with him on it.”

Vincent, a noted authority in the realm of King scholarship, had interacted with King in the past, but never as a collaborator. His first writings on King appeared in 2001, when Chizmar asked him to take the reins of the King news and reviews column in Cemetery Dance magazine. Vincent went on to author The Road to the Dark Tower (2004, New American Library) and The Stephen King Illustrated Companion (2009, Fall River Press) with King’s blessing, but without the legendary author’s participation. When Vincent went to work on The Dark Tower Companion (2013, NAL Trade), though, King granted him a rare interview.

“Over the years, these projects have led to more and more interaction with King,” Vincent says. “Mostly we exchange recommendations for and discuss TV series and books. Our tastes are quite similar and it’s always fun to introduce him to something I like that he may not have heard of, and vice versa. FLIGHT OR FRIGHT is really the first time we’ve collaborated on a project, and it has been a blast.”

King mentioned a couple of stories that first night, including Arthur Conan Doyle’s 1913 tale “The Horror of the Heights,” about a pilot who’s convinced that monstrous predators lurk in “air jungles” above the clouds. For Vincent, the first story that came to mind was Richard Matheson’s 1961 classic “Nightmare at 20,000 Feet,” which famously inspired the Twilight Zone installment that finds William Shatner (and later John Lithgow, in George Miller’s big-screen remake) menaced by a gremlin perched outside his airplane window.

“I could immediately see the possibilities,” Vincent remembers. “King’s aversion to flying is well documented, so a collection of stories that delve into one of his phobias seemed perfect.”

“I thought there would be a lot of stories to choose from, but it turned out to be a fairly narrow sub-sub-genre of horror,” he allows. “Still, I don’t think there was ever any doubt that we could come up with enough stories. We got suggestions from friends and colleagues, and did extensive internet research to fill our table of contents. And now, barely more than a year later, it’s a reality.” 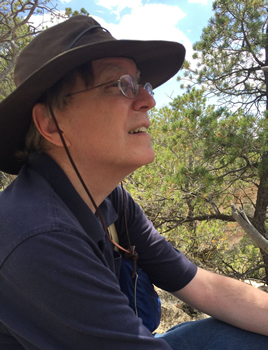 The editors ended up with a collection of tales covering a surprisingly wide time span, with the oldest entry—Ambrose Bierce’s three-paragraph tale “The Flying Machine”—dating back to 1899. The result is a remarkably comprehensive survey of our ever-shifting but always-uneasy relationship with flight. The volume also distills two of horror’s most potent themes: isolation and loss of control. Some stories find their characters at the mercy of mechanical failure or human malice; others pit fliers against monsters, zombies, and the specters of murdered children. All of them remove the option of rescue or easy escape.

“Being five miles up, surrounded by strangers, fending off gravity while traveling at astonishing speeds is about as isolated as you can get on this planet,” Vincent says. “The element that differentiates this situation from, say, a remote island is the fact that any number of things can go wrong that will send you hurtling toward the earth…and there’s nothing you can do about it. As Steve says in his intro, the one guarantee you have when an airplane takes off is that it will, at some point, come back down again. Hopefully under pilot control, but not always. Add a scary element to this mix: If your house is haunted or a zombie suddenly shows up in your basement, you can always run away, but on an airplane there’s nowhere to go. If someone is murdered in the airplane bathroom, you can be absolutely certain the killer is sitting nearby for the rest of the flight. If someone goes insane and tries to bring the plane down, your options are limited. If most of the passengers and crew vanish while you’re asleep, what can you do?”

Vincent also notes that, like the horror genre as a whole, flight-themed stories have undergone a marked shift since 9/11. While many of the volume’s pre-9/11 stories tend to focus on non-human antagonistic forces, more recent entries often center on the horrors we visit upon one another without any help from supernatural influences. As an example he cites Joe Hill’s “You Are Released,” which concerns the fate of a passenger flight unlucky enough to be in the air when an apparent nuclear strike is reported in Guam.

“ ‘You Are Released’ is truly a post-9/11 story,” Vincent says. “Not only post-9/11, post-2016 election. When Joe delivered the first draft in late 2017, the events it depicts seemed horrifyingly possible. A couple of stories deal with problems that can occur in flight that aren’t caused by people (mechanical failures, turbulence), and some involve supernatural interference (demons, ghosts, zombies, gremlins), but the human element is more prevalent in the post-9/11 era. In the 20th century, we worried about being hijacked, but in the past two decades we have become acutely aware of the possible ways human beings can cause problems after takeoff. Moreso than mechanical problems, possibly.” 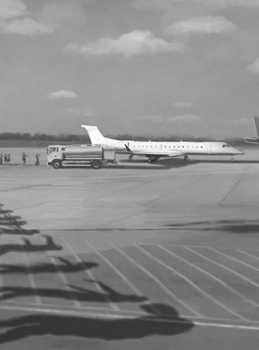 Vincent’s own contribution to FLIGHT OR FRIGHT falls somewhere in between. “Zombies on a Plane,” originally written for a zombie anthology called Dead Set from Texas-based publisher 23 House, sees a group of survivors turn to an abandoned airstrip for one last chance of escape from an undead onslaught.

“For some reason the title leapt into my mind before anything else,” Vincent recalls. “This was a few years after the Samuel L. Jackson movie Snakes on a Plane, and there were still a lot of running jokes about the movie’s title and Jackson’s expletive-filled rants. I think it’s the only story I’ve ever written where the title came first. So, starting with that, I had to, well, get some zombies on a plane…and the challenge was figuring out how to do that. I haven’t written much zombie fiction, and the stories I have written don’t focus on the zombies very much, and that’s the case here as well. The story is set, by the way, in Halifax, Nova Scotia, where I attended university during the 1980s.”

Vincent, whose Cold War thriller “The Honey Trap” was nominated for an ITW Thriller Award for Best Short Story in 2015, is currently at work on a project called Dissonant Harmonies, which will combine a pair of music-inspired horror novellas penned by Vincent and author Brian Keene. Vincent’s entry, titled “The Dead of Winter,” will be the longest piece of fiction he’s published to date. But while he remains devoted to the horror genre as a scholar, critic, and fan, he says his interests as a writer have “slowly but steadily migrated toward suspense and crime fiction” in recent years.

“Even when someone asks me to write a horror story I tend to come up with something more akin to a thriller or a mystery,” he says. “For example, I wrote a serial killer story a few years back where the victims were vampires! But ‘The Honey Trap’ is more typical of what I write these days.”

FLIGHT OR FRIGHT lands September 4 from Cemetery Dance. The publisher, known for its highly collectible limited editions, will release the book in several versions, including a clothbound, foil-stamped trade hardcover and a slipcased artist edition featuring illustrations by Cortney Skinner. For collectors with a first-class budget, there’s also the $1500 lettered edition, limited to only 52 leather-bound copies signed by King, Vincent, and Skinner, finished with custom-made endpapers, and housed in a bespoke traycase.