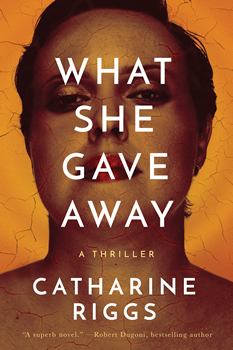 Catharine Riggs lives and writes on California’s central coast. A graduate of UCLA with an MBA from Drake University, Riggs is a former business banker, adjunct college instructor, and nonprofit executive. WHAT SHE GAVE AWAY is her debut novel.

Robert Dugoni: We met in a rather unusual way. You enrolled in my writing intensive and submitted the first 50 pages of a novel for critique. I was so blown away by the voice that I asked you for the entire manuscript. After reading the manuscript, I called to tell you that I didn’t think I could help you, that you were ready to be published and I would help you find an agent. That has never happened to me before or since.

So, tell me about the process of submitting that first manuscript to an agent until the moment you learned she loved your manuscript and that you would be published?

Catharine Riggs: It was an exciting time. I had been writing for years and the validation was so uplifting. I can’t thank you enough for the part you played. After submission, there were a couple of “nail biting” months. We went back and forth on suggested changes. I think it may have been a test – how well did I work with the agent, was I willing to incorporate feedback and respond in a professional and timely manner.

RD: What was the waiting like and what was that moment like when you learned that publishers wanted to publish your novel?

CR: The first year after signing was tough. We didn’t sell the original manuscript and although there was interest in my second, the first few editors passed. I was at a groundbreaking for a trio of Habitat homes when a young mother got up and gave a tearful speech thanking the community for the opportunity to own a new home. Chastened by her family’s story, I ordered myself to stop whining about a book sale and be grateful for all I had. That’s when I glanced at my cellphone and saw the text, “We have an offer!”

RD: There are a lot of books out there, but missing What She Gave Away would be a shame. What’s your tag line to draw readers to this terrific novel?

CR: Revenge is anything but sweet in this twisty thriller about two women with very different lives locked in the same deadly game.

RD: So where did you find such a strong sense of voice for each of your characters, and particularly your protagonists?

CR: I don’t find my characters. They find me. One of the two protagonists of my debut novel materialized at a UCLA writing workshop. I was coming off a horrible bout of the flu, and when directed to write a scene, Crystal flew onto the page demanding to be heard. 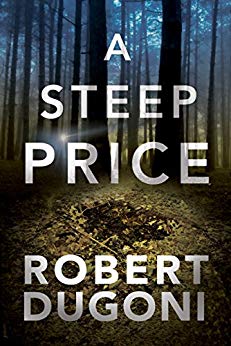 RD: I was struck by the plot. It reminded me a bit of Tom Wolfe’s Bonfire of the Vanities in that things go from bad to worse and ultimately to catastrophic for each of the characters. It had to be a lot of fun to write.

CR: I must have a sadistic streak because I enjoy ratcheting up the heat on my characters. I’m always asking, “Is the water boiling yet?” I do feel bad for them from time to time. I admit to crying while writing several of the more intense scenes.

RD: The book delves deep into the inner workings of a community bank, including the day-to-day workings. I’m assuming that as a former bank executive you had to be pulling from your background to a certain degree. Can you talk about how you did that while keeping the plot moving forward at such a quick pace?

CR: People think of banking as a boring occupation. I don’t know of any sitcom set in a bank. But a bank can be filled with intrigue: eccentric customers, duplicitous coworkers, greed, fraud, theft, scams, affairs. Combine that with my writer’s penchant to stretch the truth and plotlines are easy to come by. I worked hard to weave in a realistic depiction of a fictional fraud without getting bogged down in the details.

RD: Tell me about your work day. Any peculiarities you’ll share to get you in the writing mode?

CR: Years ago, I got in the habit of writing in the early mornings before work and family intervened. At that time of day, my brain is a little fuzzy and my artistic side blooms.  I write from 5 until 6:30 and then head out on a run. I’ve found running to be a great way to solve plot problems or nail a sentence just right. After that, it’s off to work. I edit in the late afternoons. When I’m at work on a novel, I write at least 1,000 words a day. Good or bad, it doesn’t matter. I can always toss them out.

RD: I have yet to meet an overnight success in writing. Tell me the process you went through to learn the craft.

CR: As a child, I was a voracious reader who would escape for hours into the pages of books. I grew up wanting to be a writer but with a fulltime job, a husband and two daughters, everyday life intervened. When my oldest left for college, I had an epiphany and set a goal to become a published novelist. After that, I wrote daily and slowly began to learn the craft. I studied manuals, attended conferences, sat in workshops and queried agents. I wrote three novels before I signed with my agent, four before I sold my first book.  I don’t regret the time it took to achieve my goal. I’ve enjoyed every part of the journey.

RD: Does your family read your books?

CR: My husband is my first reader. He’s not a writer but he devours thrillers, so he has a good feel for the genre and has an eye for discerning plot problems.

RD: Are you an outliner or do you write organically?

CR: I’m most definitely a “seat-of-the-pants” writer. First comes a voice or voices. Then an idea for a plot. Then a beginning and somewhat of an ending. The rest is a mystery, even to me.

RD: What are you working on next?

CR: I’ve just completed the second novel in my Santa Barbara Suspense series. It’s loosely linked to WHAT SHE GAVE AWAY through secondary characters and location.

Robert Dugoni is the critically acclaimed New York Times, #1 Wall Street Journal and #1 Amazon Best Selling Author of The Tracy Crosswhite series, My Sister’s Grave, Her Final Breath, In the Clearing, and The Trapped Girl. The Crosswhite Series has sold more than 2,000,000 books and My Sister’s Grave has been optioned for television series development. He is also the author of the best-selling David Sloane series, The Jury Master, Wrongful Death, Bodily Harm, Murder One and The Conviction, and the stand-alone novels The 7th Canon, a 2017 finalist for the Mystery Writers of America Edgar Award for best novel, The Cyanide Canary, A Washington Post Best Book of the Year, and several short stories. He is the recipient of the Nancy Pearl Award for Fiction, and the Friends of Mystery, Spotted Owl Award for the best novel in the Pacific Northwest. He is a two-time finalist for the International Thriller Writers award and the Mystery Writers of America Award for best novel. His David Sloane novels have twice been nominated for the Harper Lee Award for legal fiction. His books are sold worldwide in more than 25 countries and have been translated into more than two dozen languages including French, German, Italian and Spanish.