A Tale of Troubling Secrets 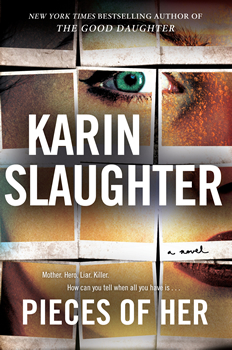 It’s one of the most enduring questions to ever stoke the imaginations of thriller writers: how well do we really know our loved ones? Countless novels find their characters excavating the secrets of spouses and lovers, but Karin Slaughter reframes and refreshes the classic trope as a mother-daughter story with PIECES OF HER, a standalone thriller out this month from William Morrow.

“I thought it would be fascinating for a young woman to realize that the person she’s known her entire life is basically a stranger to her,” Slaughter says. “Books like The Husband’s Secret and Gone Girl are about spouses who are not who we think they are, but the fact is our parents are not who we think they are either. Nobody really wants to know about their parents’ wild college years or their sexual mistakes or the things that basically make them human…I thought that would be really interesting to play on.”

To be fair, the youthful exploits of Andrea Cooper’s mother, speech pathologist Laura Oliver, are a little more upsetting than binge drinking and sexual indiscretions. Andy’s first clue that her mother harbors troubling secrets is couched in a grisly act of violence: a gunman opens fire at a shopping mall where Andy and Laura are having lunch, gorily dispatching two of Laura’s acquaintances. The shooting spree—not to mention the killer’s life—comes to an abrupt end when Laura violently and efficiently intervenes, leaving Andy to wonder who the hell her mother really is. When another deadly encounter makes it clear that their lives are still at risk, Andy embarks on a cross-country quest to dig up the bloody secrets of her mother’s past.

Slaughter says the story was born of her interest in the gulf between adjacent generations, with a thriller writer’s eye toward the tensions that come along with shifting attitudes and expectations.

“I wanted to talk about the differences between generations of women, and there’s no better way to do that than with a mother-daughter story because you have two distinct, different generations,” Slaughter explains. “And I thought about the fact that, when I was growing up, women had very few choices about what they could do with their lives. Even in the late 1980s, it just wasn’t presented to young women that they could be doctors or lawyers. The goal was still to meet a nice guy, settle down, have a family. Even though Laura is older than me, that’s very much the sort of message she grew up with. You can juxtapose that against Andy’s experience—Andy is a young woman who has so many choices that she’s stymied by it. I thought it would be really interesting to use this kind of thriller rubric to talk about those differences.”

Slaughter, whose tally of published novels ticks to 18 with the release of PIECES OF HER, is no stranger to standalone thrillers. She continues to write her bestselling Will Trent series (which has absorbed her also-bestselling Grant County series), but she’s become an equally reliable producer of freestanding thrillers since testing the waters with 2014’s Cop Town—a period novel that, while it featured characters familiar to readers of Slaughter’s two intersecting series, functioned as a self-contained story. The next year saw the release of the nightmarish standalone Pretty Girls, with the equally harrowing The Good Daughter following in 2017.

Slaughter says the standalones allow her to flex different storytelling muscles than her series and give her some occasional, much-needed distance from the ongoing ordeals of GBI special agent Will Trent, who made his first appearance in 2006’s Triptych. Trent has gone on to star in seven subsequent thrillers, with another due out in 2019.

“I love writing the Will Trent novels, and I’m working on the new one now for next year,” Slaughter says. “I’m really passionate about those. But I want to be able to step away from them. Sometimes I’m just not at a place where I’m ready to write another Will Trent story, and this book I’m working on now—I could never have written it and had it be as good as I think it’s gonna be if I had started it last year. I hadn’t had enough time to think about the story and where the characters are. There was sort of a cliffhanger at the end of the last one [2016’s The Kept Woman], so in order to do the story justice I need time to think about it, and doing a standalone like this is the perfect opportunity to take a little break.”

In the case of PIECES OF HER, Slaughter’s “little break” produced a 480-page, hurricane-paced epic that spans several decades and most of the breadth of the United States. The storyline, which catapults from the tiny seaside town of Belle Isle, Georgia, to sun-baked Austin, Texas, to the hilly sprawl of San Francisco, marks a departure for Slaughter, whose typical Georgia setting has become one of her defining trademarks. The book’s expansive backdrop presented a new challenge: Slaughter wanted to avoid the episodic rhythm that often defines stories that center on a literal journey.

The story’s chronology is just as expansive as its geography. While Andy’s frantic dive into her mother’s past plays out in the present day, Laura’s backstory is provided in lengthy, visceral flashbacks to 1986. The dual-timeline structure is one that Slaughter has deployed before, most notably in The Good Daughter and 2012’s masterful Will Trent entry Criminal.

“I think anyone who writes crime fiction is just aware that history often has a large impact on the present,” Slaughter says. “When I’m writing a story, I’m always mindful that people are made up of the sum of their past. That’s something I often touch on, and it’s just a good opportunity to show people how history repeats itself. … I also think this is the kind of story you can’t tell straightforward. I’m a big believer in ‘if you’re explaining, you’re losing.’ It would be a lot of exposition if I didn’t tell it this way.”

The flashbacks also give Slaughter, who mined the cultural anxieties of the 1970s to tremendous effect in Cop Town, the chance to ramp up tension by homing in on the sociopolitical turmoil of the ’80s.

“In general, the 1980s are a lot like what we’re seeing now,” Slaughter says. “After the social and political upheavals of the ’70s, the time was pretty ripe for discord. Just from a thriller standpoint, [the ’80s are] great to write about. You had more serial killers, you had higher crime rates, you had people believing that the social contract had been broken and so they were more likely to skirt the law in a way that they wouldn’t have before all this disillusionment. And you had a lot of people who were ready and willing to make violent social change. I think it perfectly reflects where we are right now, not just as a country, but the entire world.”

And while Slaughter has found great success exploring timely social issues through the lens of crime fiction—her novels have tackled topics ranging from racism and transphobia to misogyny and sexual violence—she cautions against becoming too fixated on headlines.

“You never know what the news is going to be day to day, especially given the current occupant of the White House,” she says. “It just changes on a dime. So I think as a writer you have to choose not to write in a very topical way—you can only write the story in such a way that, if people want to think about the world as it is now, it might give them some thoughts.”