The Day That Tiny Jason Killed It…

Winter—organizers knew—was coming to ThrillerFest. They’d planned for it, prepared for it. Invited it, actually, when they asked 2018 Thrillermaster George R.R. Martin to attend.

But unbeknownst to the ThrillerFest team—and the almost 1,000 attendees—an unexpected villain had snuck in for the festivities. Cradled in the arms of his mother—ITW Social Media Manager, Jillian Stein—Tiny Jason Voorhees, an homage to the main character in the Friday the 13th series, slipped into the Grand Hyatt in New York with only one thing on his mind—who would meet the business end of his machete today?

No, Jason, we’re pretty sure Tori Eldridge can’t get you a part in The Equalizer 2, no matter how convincing you are at being a good villain.

His first kill was “a lovely woman, Tori Eldridge,” he says. “She happened to be walking down the hallway and looked like a nice choice for the first slash of the day.”

Amid an oblivious crowd of aspiring authors, Tiny Jason got to work.

“The other folks in the hallway didn’t seem too concerned with what was happening, though,” he says. “I guess at a place called ‘ThrillerFest,’ it’s a little harder to get screams and shrieks of terror.”

Not that he didn’t give it his best shot. 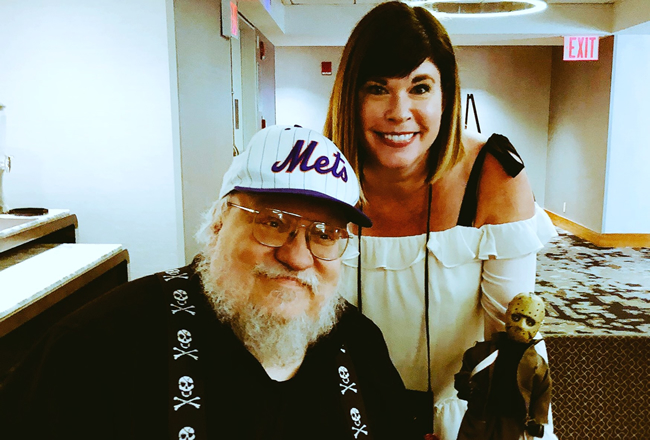 Sorry, Jason, the world is waiting for more Game of Thrones — George R.R. Martin had to be saved from a “visit” with you.

Throughout Friday, July 13, Tiny Jason lurked the crowded hallways, poked his head—and his machete—into panel discussions, private meetings, and workshops in search of enough victims to fulfill his prophecy, a tradition born out of Stein’s love of all things Halloween, with a special affection for the Friday the 13th movies.

“Looking back, I can always remember a time that I’ve loved watching horror films,” she says. “I probably started entirely too young with Alien, Nightmare on Elm Street, and of course, the Friday the 13th franchise. Growing up in the Poconos, I attended a camp every summer and we had our own camp legend about a creepy recluse who lived in a dilapidated house on the other side of the camp’s lake. So, because of that, I think I was drawn to Friday the 13th.” 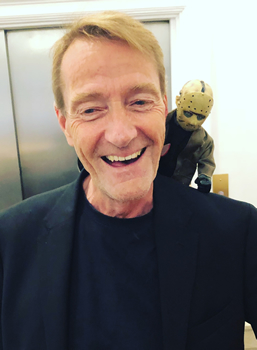 No, Jason, attempting to kidnap Lee Child isn’t a good test to see if Jack Reacher is real.

She started collecting horror memorabilia about a decade ago, and one piece was the doll affectionately now known as Tiny Jason. Six years ago—on a Thursday the 12th—Stein posted a picture of the doll on Facebook with the caption: Wouldn’t it be funny if I took him around on my errands tomorrow?

Most of Stein’s friends didn’t think she’d actually do it, and so with the gauntlet of challenge thrown, Tiny Jason’s first adventure began. Stein posted pictures throughout the day, and the images garnered so much enthusiasm, she decided to make it a Friday the 13th tradition, carting the doll to wherever her schedule took them—often to author events.

“I’m like the Santa Claus of slashing,” Jason says. “Just call me Slasha Claus. Just kidding. Don’t call me that unless you want to meet the business end of my machete.”

It’s obvious many ThrillerFest attendees chose to ignore the warning, though, as Tiny Jason slashed his way to some of the genre’s biggest names, like R.L. Stine and Lee Child.

Jason! No, we don’t think that Joseph Finder wants to know what the buried part of his book Buried Secrets feels like!

“I was about to get my slash on and then remembered just how many people are waiting for his next book,” he says. “Figured I’d be nice, keep my machete to myself, and pose for a picture. Winter needs to come, am I right?” 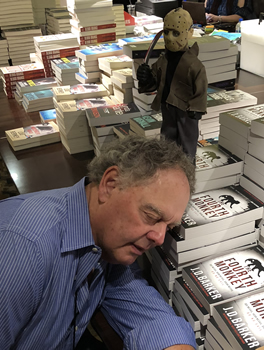 No, Jason, we don’t think Dr. D. P. Lyle wanted to experience his OWN heart stopping.

In the meantime, Tiny Jason is busy curating his “dying to kill list,” ranking Anne Rice, Brad Meltzer and Stephen King at the top. (“Hit me up, guys.”)

Everyone else can take a deep breath—for now. Tiny Jason only comes out to play on Friday the 13th, and the next one doesn’t happen until September 2019.

You can check out Tiny Jason’s past victims on Instagram @TinyJasonsAdventures and on his website www.MeetMeAtTheLake.biz. Be warned, though: some of the images are not for the weak of heart.

Murder pictures aside, Stein assures us that “no children were actually harmed in the making of any Tiny Jason photo.” Unlike the mother of the real Jason Voorhees, she’s not a psycho murderer.

Miss out on Thrillerfest this year? Get the full scoop on what happened in these The Big Thrill wrap-up articles: