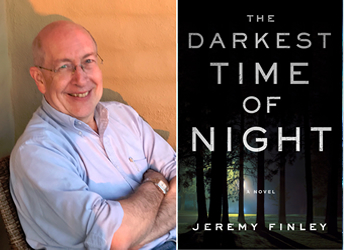 Jeremy Finley is a hard-nosed professional. As the chief investigative reporter for the NBC-affiliated television station in Nashville, he has spent more than 15 years exposing corruption, financial abuse, and criminal activity, and has won some of the highest honors in journalism, including multiple Emmys, Edward R. Murrow awards, and IRE (Investigative Reporters and Editors) awards.

It’s also led him down some very unexpected paths. “My day job is so rooted in proof—in verifying facts and seeking documentation of everything—I’m a bit obsessed that we still haven’t been able to come to a true conclusion about alien abductions and strange lights in the sky. And the Loch Ness monster. And Bigfoot. This is why I don’t sleep at night.”

In THE DARKEST TIME OF NIGHT, Finley’s electric first novel, a seven-year-old boy vanishes in the woods behind his Nashville home, and the sole witness, the boy’s older brother, can only say, “The lights took him.”

They’re words that give a shock to their grandmother, Lynn Roseworth, because decades earlier she’d heard the exact same phrase while working for an astronomer studying unexplained disappearances around the country. The odyssey it sends her on, and the astonishing things she discovers—not only about the disappearances but also about her family and herself—makes for a roller-coaster ride, a story filled with dramatic twists and turns that will easily hold any reader, believer or not.

“What I wanted to achieve was the sense of normalcy in extraordinary circumstances. I wanted these characters to be people that you would have in your family. People deeply rooted in reality. So when the mysteries unfold and the race to find this missing child begins, the characters are asking the same questions you would ask if it were happening to you. The book explores the thought of just how far you would go to find your loved one, even if it meant believing in something that no one truly understands or, in many cases, is widely disputed.”

The inspiration for the book came from a very unlikely source. “My mother-in-law, who is this quiet, brilliant woman who can usually be found doing crossword puzzles and working in her garden, once casually mentioned that when my father-in-law was in law school, she worked as a secretary for an astronomy department and specifically for a professor who did UFO research. She talked about taking bizarre messages from callers, and that the professor went on to be an extra in Close Encounters of the Third Kind. Once I picked my jaw off the floor, my mind started forming the story that would become THE DARKEST TIME OF NIGHT.

“Speculative fiction is my hands-down, all-time favorite genre of fiction. All of my heroes are writers. At the top of the list is Carl Sagan, who gave the world Contact; Robert McCammon, who masterfully blends our world with the unknown; Jennifer McMahon, who’s a genius in this regard, too; her speculative thrillers are like crack cocaine. I’m blowing through a Michael Kortya novel as we speak. And I haven’t even gotten into Anne Rice and Stephen King and Ann Patchett and J.T. Ellison….” 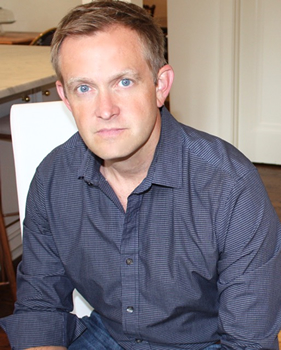 For his research, he read many interviews, articles, books, and anything else he could get his hands on. His goal was always to put himself in the reader’s place, to answer the questions before they were asked: “In investigative journalism, the details are everything. I take the same approach to fiction. In my reporting, I have to ask myself: Do I have everything verified? What would a critical viewer or reader take issue with? It’s the same concept for my fiction writing. I want what I’ve written to feel authentic. I want you to be so comfortable in the normalcy that you don’t see the monster slowly rising from your back seat.”

And there are plenty of monsters in his daily life as well. He has gone after sexual predators, thieves, and scam artists; battled powerful forces to uncover corruption in the Tennessee prison system, courts, and National Guard. “But without a doubt, the most eye-opening investigation that I am most proud of has been a 10-year-and-counting investigation into a company that we caught selling bogus insurance to desperate people nationwide; people who could not afford insurance and were suffering from serious diseases such as cancer and AIDS. On the day before this novel comes out, the CEO of the company and his wife are set to be sentenced in federal court for what we exposed.”

With all that success and professional acclaim, did that make his path to publication any easier?

“Mine is such a glorious tale of failure. I relish in telling it, if only to give hope to aspiring novelists,” he says.

“When I first showed a novel I was working on to a literary publicist, she told me I was a bad writer (she was right, I  had a lot to learn). When my first agent emailed me to let me know all of the publishers had widely rejected my first novel, he also included that the new novel I was working on wasn’t a good fit for him and that he was ending our representation. It was a painful, but necessary breakup.

“Following that, 60 other agents rejected me. I then had my house collapse on me when I was rewriting. That last part isn’t true, but you get the picture.

“Finally, two agents, including Paul Stevens, a then-new agent with Donald Maass, the literary agency I had always wanted to join, showed interest. Within four months after signing with Paul, I had a two-book deal with St. Martin’s.”

But surely, before the happy outcome, all that failure must have been discouraging. Did he ever think about giving up? The answer, he says, lies deep in his past.

“I have had very few moments of complete and utter clarity in my life. One of them occurred in Mrs. Haas’ fifth grade class at Carterville Grade School. I distinctly remember walking through the desks to turn in my first short story for the Young Authors Contest. In my hands, I carried a story about my dog, using only his wits and GI Joe toys, to rescue bunnies stuck in our drainage ditch (a plot that now sounds like a bad drug trip). I knew, without a doubt, I would win. And I did. And from that moment on, I knew I wanted to be a novelist. It took only 34 years from that moment to happen.

“I’m so humbled by this experience after so much rejection and heartbreak. I’ll be nearly 45 when this novel comes out, so if you take anything away from reading this, know that that long-awaited dream you’re trying to achieve can certainly happen. Don’t let anyone tell you it can’t.”

A message from which we can all benefit. He is now working on the sequel to THE DARKEST TIME OF NIGHT.