How does a historical fiction writer bring a location to life and connect the past to present-day readers? For my World War One thrillers, my challenge was illuminating New York City, which served as the center for Germany’s little known undeclared war against America between 1915 and 1918. I was shocked to learn that Germany’s greatest success in this war occurred in New York Harbor at a place called Black Tom Island, now part of Liberty Park, a grassy area overlooking the Statue of Liberty where people toss Frisbees and picnic.

Stand in Liberty Park today and look across to lower Manhattan. Ellis Island and the Statue of Liberty continue to inspire. More recently, the Freedom Tower has replaced the World Trade Center as the dominant landmark. A century ago, the view was different. Though lower, the skyline was bourgeoning. The 60-story, 792-foot Woolworth Building at 233 Broadway was the tallest building in the world, signifying New York City’s growing commercial dominance as it surpassed London on the world economic stage.

Black Tom Island, across the harbor in New Jersey, contributed to the city’s success, serving as a major transport hub for American goods sent to the Allies. Railroad lines fed an extensive warehouse-and-shipping complex with piers jutting into the harbor. Maps and pictures of the time show us how it was.

New York’s Black Tom Island in 1916, after German saboteurs attacked. The explosion was so great, people as far away as Delaware assumed it was an earthquake.

Black Tom Island changed dramatically on the night of July 30, 1916, when German saboteurs blew it up to reduce of the flow of materiel to the Allies. The New York Times described this incident as “the most destructive terrorist attack in America before 9/11.” Two million pounds of explosives were detonated, creating tremors that registered 5.5 on the Richter scale, a force greater than that on 9/11. People in Delaware believed an earthquake had struck. Damage was estimated at $500 million (in today’s dollars). The Brooklyn Bridge shook. Lower Manhattan was covered with ash and broken glass. New York Harbor smelled of gunpowder, toxic chemicals, dead fish, and debris. Sugar burning in the Black Tom Island warehouses made the air taste sweet. The Statue of Liberty glowed orange and suffers today from damage incurred that night. The psychological impact on New Yorkers was so great that church attendance the next day was the highest since President McKinley’s assassination in 1901.

This attack was one of many perpetrated by the extensive and well-funded German spy network. During the war, these spies succeeded in blowing up U.S. ships and plants. The network’s nest of agents was concealed by legitimate German diplomatic and cultural functions in Manhattan offices still in use today. The Hamburg-American Shipping Line maintained offices at 45 Broadway. Its head of security, Paul Koenig, surreptitiously controlled the City’s dockyards. Germany’s commercial attaché, Dr. Heinrich Albert, worked at 60 Wall Street and served as the paymaster for its covert operations. Captain Franz von Papen, head of the War Intelligence Center, also worked there. Captain Karl Boy-Ed, the German naval attaché and spy, maintained offices at nearby 11 Broadway. All were subsequently identified by U.S. law enforcement and expelled from the country.

Suspicious of German activity, the New York Police Department’s elite Bomb Squad unit, led by Captain Thomas Tunney, hunted these agents. Police headquarters at the time was located at 240 Centre Street at the edge of Chinatown, a short walk from Battery Park and the site of the doomed World Trade Center. In 1915, the hike would take you over trolley tracks and horse manure. A 1909 Harper’s Weekly article called the five-story, granite-and-limestone, Art-Deco building “the finest Police Headquarters in America.” It contained the largest telephone switchboard in the world outside of a telephone exchange. 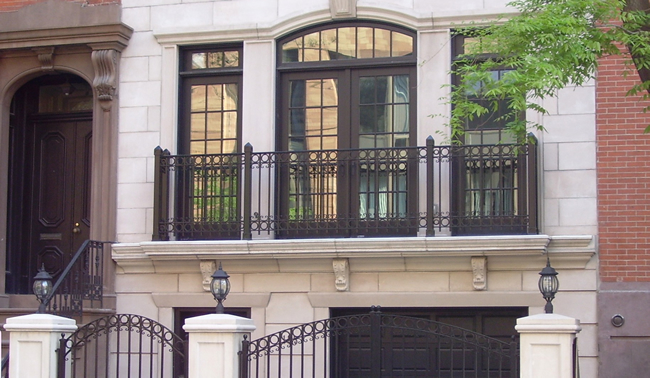 A sinister spot: In 1915, this townhouse was where German agents gathered in secret.

The magnificent building stands today but serves a different function since the NYPD moved headquarters in 1973. The gilded dome still recalls a Statehouse, and two couchant lions continue to guard the short marble stairway leading to the main door. Decorative iron gates front the building. A garden rests tranquilly at the north end of the complex. Inside, the grand entrance hall, with its spiral staircases, remains, but the building is now high-rent condominiums, home to investment bankers, fashion moguls, and celebrities.

Go further north to 15th Street. Turn west and stop at the space which was once 123 West 15th Street. In 1915, this townhouse served as an unofficial meeting house for German agents, influential German-Americans, and, at times, the German Ambassador, Count von Bernstorff. It allegedly doubled as a whorehouse where condoms were referred to as “fritzes.” Boisterous celebrations occurred there after Black Tom Island exploded.

James Hockenberry’s World War I Intrigue Trilogy brings alive the tensions and controversies of the times and provide insights into many current problems: immigration, terrorism, and the devastating cost of war.

For more information on James and his work, please visit his website.