Writing thrillers for young adults takes a special kind of skill—an understanding of how to balance authentic experiences with safe thrills.

The five books nominated in this year’s International Thriller Writers Best Young Adult Novel category have achieved that extraordinary balance—though, for some of the authors, not without tremendous trial and error.

The nominees took some time out from preparing their acceptance speeches this month to answer a few questions for The Big Thrill about their journey to publication, the fears that plague them, and the stories that have earned them each well-deserved praise.

If you’d lived on the same city block as Diana Rodriguez Wallach the day she learned PROOF OF LIES had been nominated for an International Thriller Writers award for Best Young Adult novel, you might have heard a few expletives.

The author danced in her living room, squealed, and then called her husband to tell him the good news. “It was an awesome moment,” she says.

“It would have been very easy for me to give up so many times, but I felt in my heart that it was the book I was destined to write,” she says. “So I persevered. I revised it again and again, and each time I made it so much better. Being nominated for this award, by such a prestigious group of writers, is more validation than I could ever have hoped for all those years I was plugging away. It’s proof that I wasn’t crazy believing in this book, and believing this story had a right to be on the shelf.”

Clearly, she isn’t alone in her thinking. PROOF OF LIES tells the story of Anastasia Phoenix, a young girl whose sister goes missing and is presumed dead. In the quest to find out what happened, Anastasia uncovers some uncomfortable truths—including what their parents might have been involved in before their deaths.

It’s a chilling tale in the vein of young adult thriller masters like Christopher Pike, whose books Chain Letter, Remember Me, and Fall Into Darkness inspired Rodriguez Wallach’s love of writing for youth.

“I’ve never met him,” she says. “But I would absolutely love to share a meal. We can eat whatever he wants. I’ll buy him lobster or get him Chinese takeout—he can pick.” 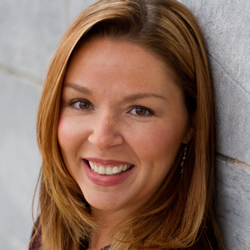 And if she’s lucky, he might choose a restaurant in an exotic locale that would feed Rodriguez Wallach’s other passion—travel.

“I’ve gone bungee jumping in Bai, swam with sharks in Bora Bora, studied abroad in Madrid, went to Easter mass in Poland, gone to a wedding in Rio, and biked through Tuscan vineyards,” she says. “If I were to ever hit a Powerball Jackpot, I’d be booking plane tickets the next day.”

Hopefully not without her laptop!  Learn more about Diana Rodriguez Wallach and her books by visiting her website.

Gregg Hurwitz doesn’t know how to tie his shoes properly, but he’s a master at crafting stories—a skill evidenced by an International Thriller Writers (ITW) Best Young Adult Novel nomination for his book, THE RAINS.

Being shortlisted for this award in particular means a great deal to Hurwitz—though he’d prefer that be kept quasi-secret, much like his illustrious past as a college pole vaulter.

“I’ve been fortunate enough to have received two ITW nods in the past, and to be honest, recognition from ITW means the most to me,” he says. “I was there at the founding meeting and helped start this organization to recognize thriller writers in our own distinct category. So my thinking is—go thriller writers! This one is also whipped-cream-on-top special since it’s my first YA book.”

In it, everyone over the age of 18 turns into a horrific zombie-like creature who hunts kids, and it’s up to two brothers—Chance and Patrick Rains—and their best friend Alexander to save their town and “maybe even (dun dun dunnnn) the world.” 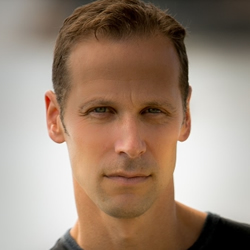 Hurwitz’s two Rhodesian Ridgebacks star (by proxy) in the book, and when he heard about the nomination, he took them for a long hike.

If he wins, chances are good that Hurwitz will enjoy a glass or two of bourbon—which he would use to toast William Faulkner, an author he claims has most influenced his career.

For more about Hurwitz and his novels, head to his website.

SHERYL SCARBOROUGH – TO CATCH A KILLER

TO CATCH A KILLER is Sheryl Scarborough’s first book, so sometimes, she has to pinch herself to believe that it was really—truly!—nominated for an International Thriller Writers Best Young Adult Novel award.

“To be nominated by such a straight-up, legit organization reaffirms that my dream really did come true—and then to be among such esteemed authors, well, that inspires a great deal of awe,” she says. “I’ve been a thriller fan since my days as a young adult reader. Being nominated makes me part of the thriller legacy and I couldn’t be more…well, thrilled!”

Even though she’s been writing for most of her adult career, Scarborough’s foray into publishing her first novel—a book she describes as “CSI for teens”—took several backroads before she crossed the finish line. She’s written series developments, teleplays, comic books, non-fiction children’s books, business plans, magazine articles, ghosted for a celebrity, and even gone on tour with a boy band—for research, of course.

“An award would truly be the cherry on top of a super-fun career,” she says.

And to celebrate, she’d love to take Stephen King and Dean Koontz—because who can pick just one?—out to dinner where they would dine on live Maine lobsters and great wine.

You can catch more about Scarborough and her killer books by visiting her website.

Even after almost five years of full-time writing, Rysa Walker admits she’s prone to imposter syndrome, the fear that despite several bestselling books to her credit, readers will figure out she doesn’t have a clue what she’s doing.

But having THE DELPHI EFFECT nominated for an International Thriller Writers Best Young Adult award goes a long way toward curbing that fear.

“Some of my favorite writers are among the previous ITW nominees,” she says. “Maybe looking at THE DELPHI EFFECT on that list will help me shake the feeling the next time I have one of those days where I’m terrified that everyone will discover I’m totally winging it.”

Though a quick peek into her impressive career pretty much solidifies that Walker knows exactly what she’s doing—and THE DELPHI EFFECT is just the latest in a long list of books poised for accolades from the young adult community.

In it, a teen’s ability to pick up “mental hitchhikers” leads her to the center of a government conspiracy aimed at exploiting dozens of people with similar gifts. Fans of Walker’s work won’t be surprised to hear it includes…death.

“I’m perfectly capable of reading and writing scenes where numerous people die, often in a graphic fashion,” she says. “My teens will often ask how many people I killed after a writing session and, to be honest, those scenes are usually among my favorites to write because they are fast-paced and visual.”

But not too visual. Walker says the scenes are sepia-toned in her head—because she can’t handle the sight of blood.

“Horror movies,” she says, “especially those of the spewing-artery variety, totally put me off my popcorn.”

Read more about Walker and her spellbinding catalogue of young adult books by visiting her website and blog. 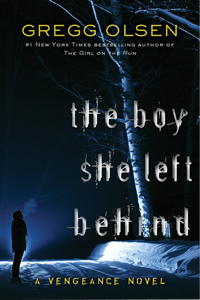 Gregg Olsen – THE BOY SHE LEFT BEHIND

Gregg Olsen wasn’t available to answer questions for The Big Thrill at time of press, but we’re sure he’s thrilled that the second novel in his edgy young adult Vengeance series was nominated for an International Thriller Writers Best Young Adult Book award.

THE BOY SHE LEFT BEHIND brings back Rylee Cassidey and thrusts her into a search for a serial killer that could either change her life—or end it. Using her well-honed skills of lying, reinventing, and plotting revenge, Rylee follows a series of leads, each one bringing her closer to a betrayal that will force her to answer one important question: Is there anyone she can trust? 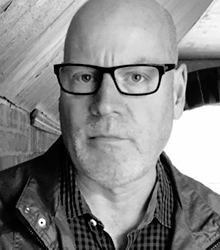 For more information about Olsen, his books, and THE BOY SHE LEFT BEHIND, take a look at his website.