Writing is hard work, yo.

Which is why the five authors nominated for this year’s International Thriller Writers Best First Novel award are not only especially grateful for the acknowledgement, but also, well…thrilled. Regardless of how they learned about the nomination—Facebook, email, mid-fight with a traffic cop… Seriously.

In this issue of The Big Thrill, we interviewed each of the authors nominated for this prestigious category to share what it means to be recognized by their peers—and the writer they’d most like to share the good news with over a cup of coffee or a good old-fashioned steak.

Can you guess which of the nominees would like that Rambo-sized? 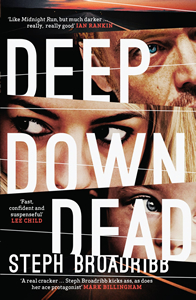 These days, getting your daily news from social media isn’t unheard of—it’s practically the norm. But what about when that status update is about YOU? That’s exactly what happened to Steph Broadribb when she learned her book DEEP DOWN DEAD had been nominated for an International Thriller Writers Best First Novel award—via Facebook.

“I hadn’t seen the ITW email with the nominees when it first came out, and so I found out from a writing friend who congratulated me on Facebook. I thought they must have got it wrong,” she says. “Then I checked the email for myself and squealed.”

The next thing she did was text her brilliant editor, Karen Sullivan.

And then, Broadribb hung up her bounty hunting gear for good. Okay, that’s not true—but what is true is that before she wielded a pen, Broadribb trained as a bounty hunter in California. Now, she writes about them, and in DEEP DOWN DEAD, single mom—and bounty hunter—Lori Anderson battles to save her daughter and bring the men who took her to justice.

“Think Thelma and Louise crossed with Taken,” she says, noting that screenwriter Callie Khouri—who wrote Thelma and Louise—is one of her writing idols. If she could take her for dinner, they’d chat about powerful, nuanced female characters…and maybe Jack Reacher too, since Broadribb credits Lee Child for helping her fall in love with action thrillers. No doubt they’d all drink a lot of coffee.

Get the scoop on Steph Broadribb—aka: Crime Thriller Girl—via her website. 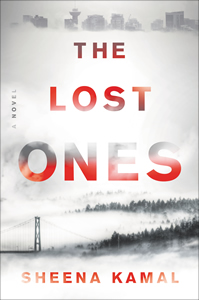 SHEENA KAMAL – THE LOST ONES

When Sheena Kamal learned that her book THE LOST ONES had been nominated for an International Thriller Writers Best First Novel award, she experienced pure, unadulterated joy and—for a brief moment—“a Gollum-like desire to win it.”

“ITW helped me kickstart my career, so to be nominated for an ITW award…it’s a special moment in my life,” she says. “Three years ago, I found my literary agent at Thrillerfest, after abandoning a floundering career in screenwriting to go off and write a novel. This is where my journey to publication started.”

The result is THE LOST ONES—set in the moody and atmospheric Pacific Northwest, a woman discovers the child she’d given up for adoption many years ago has gone missing, and she must now delve into the dark events of her past to find out just what happened.

It’s a thriller with heart, and if not for the kindness of strangers, such as members of ITW and the writer Roxane Gay, it may never have come to fruition.

“I love Roxane’s writing, but she also said something very kind to me when I approached her after one of her readings—just at the moment I needed some kindness in my life,” she says. “I’d like to thank her in person…”

Likely by way of enjoying Trinidadian doubles on the side of the road in Trinidad, because as Kamal notes, there’s nothing more delicious—“other than crab and dumplings from Tobago. But this would have to be eaten on a beach in Tobago. I would ask her which she’d prefer, because it’s important to give ladies a choice.”

The meal would most likely end with one of Kamal’s infamous firm handshakes. No, seriously—she’s got quite the grip. “I employ it often in attempts to wrestle beefy men into submission,” she says. “Even when it doesn’t work, they respect the effort.”

Learn more about Kamal by checking out her website.

Walter Gragg is reluctant to delve into his personal life—but he will admit that when he found out that THE RED LINE had been nominated for an International Thriller Writers Best First Novel award, he felt tremendous relief.

He’d been waiting for the nominations to come out in hopes that a nod would earn him a publishing deal for his second book—and the gamble paid off.

“Coming from so great an organization and so great a group of people, I cannot think of an award I would want to win more,” he says. “As some ITW members know, if it were not for Thrillerfest and the help I received from so many, it’s unlikely THE RED LINE would have been published. I am truly an ITW/Thrillerfest success story.”

THE RED LINE is—by Gragg’s definition—”an action-packed World War III epic about a war between the United States and Russia, whose intent is to present the subject in a stark and realistic manner.”

It’s a bold first book, but then that’s to be expected given Gragg’s writing influences.

“I was greatly taken by the big, bold novels of the 70s and 80s—Michener, Uris, Clavell,” he says. “But the author and book that influenced me the most, however, would be Remarque’s All Quiet on the Western Front.”

For more about Gragg and his award-nominated book THE RED LINE, check out his website. 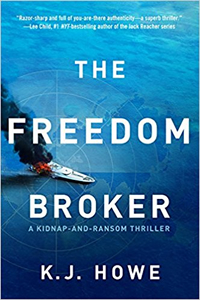 Few are more immersed in Thrillerfest than its Executive Director, Kimberley Howe—aka author K.J. Howe. Every detail—from recruiting volunteers and creating the often unwieldy schedule, to planning the awards banquet—falls under her purview.

So, it’s no surprise then that when she found out that her debut, THE FREEDOM BROKER, had been nominated for an International Thriller Writers Best First Book award, her immediate response was one of shock, followed closely by sheer delight.

“It’s a very, very special honor,” she says. “I came to the first Thrillerfest in Phoenix as a volunteer, excited about learning the craft, as my writing needed a lot of work. I met some of my literary heroes, including David Morrell and Lee Child. The dream of one day being published inspired me to work hard, and to have my first novel nominated is truly spectacular.”

Which is how many in the industry have described Howe’s book. THE FREEDOM BROKER tells the story of elite kidnap negotiator Thea Paris, who in this first adventure is up against the case of her life with a very special client—her father. 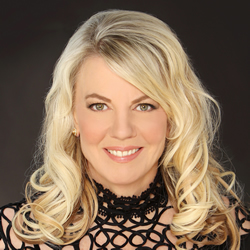 The novel received generous praise from some of the genre’s top authors, including Howe’s hero, David Morrell.

“When I read David’s spy thrillers, I was inspired to become an author,” she says. “I met him while doing my Master’s in Popular Fiction at Seton Hill, and he has since become a mentor and friend. Skyjack, my second novel, is dedicated to him.”

No doubt he will be one of the first she thanks should THE FREEDOM BROKER take top honors at Thrillerfest this July.

Check out what Howe is working on next by visiting her website.

Daniel Cole was mid argument with a traffic warden when he got the email telling him that RAGDOLL had been nominated for an International Thriller Writers Best First Novel award. It didn’t get him out of a ticket, but Cole says, “the good news undoubtedly took some of the sting out of it when the unreasonable bastard inevitably refused to back down.”

Indeed, once the incident with the officer had passed, Cole took a moment to appreciate just what the nomination means for him and the book that he describes as “humorous, cinematic, twisting and twisted escapism.”

“I think it would be fair to say that RAGDOLL hasn’t had quite the same impact in the U.S. as it has in some other countries,” he says, noting that even though the book is clearly British in both tone and humor, American movies and TV shows still serve as the greatest influence on his writing. “To the point where Hangman (book 2) is predominately set in Manhattan. So, for me, the idea of having my name probably not called out at an awards gala in New York City is particularly exciting.” 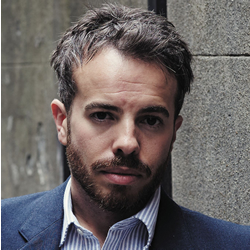 But should he win, Cole has ambitious celebration goals—most notably, dinner with the author whose books inspired his work ethic and narrative voice, J.K. Rowling. “I feel I owe her a lot and have always loved the way she writes.”

They’d share cheesecake, of course, where Rowling would undoubtedly be impressed not only by his shiny new award, but that he finished Harry Potter and the Half-Blood Prince at all. Cole is a self-proclaimed slow reader. Maybe the slowest on the planet.

Thankfully, he’s a much faster writer. Follow him on Twitter to see what he’s working on now: @Daniel_P_Cole.