Capturing the Passion of a Political Rally 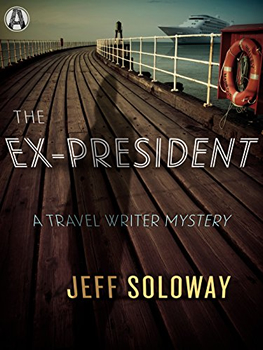 I decided to write a comic thriller about Donald Trump in the late fall of 2015, when Trump was bludgeoning fellow Republicans in debates and everything about him seemed hilarious. My novel would feature a business tycoon/reality-TV star named Carlton Chomp, who, in preparing for an absurd and obviously hopeless run for the presidency, had decided to gather his supporters on a fundraising cruise to the Bahamas. The candidate’s blunt humor and titanic self-confidence would provide the comic backdrop to a juicy murder onboard. The jokes would write themselves.

But as time went on, and more of Trump’s real-life Republican opponents fled from the field of battle, my plans had to change. By January of 2016, it was obvious that Trump and his ambitions were no joke. So I reworked my plan, this time elevating my character to a serious candidate.

When Trump actually won the nomination, I realized that not only did I have to take my character even more seriously, I had to take my novel more seriously too. What was once a comic backdrop had to become the main subject. Trump was too important to be relegated to the background. The murder would have to involve my Trump character intimately, and his political movement would have to become a real subject, not just the butt of jokes.

A good thriller portrays passions in action. To bring to life the characters in my thriller, I had to truly understand the passions that Trump aroused.

For the previous novels in my Travel Writer crime series, I took research trips to the Grand Canyon and Bolivia. This time my literary research brought me somewhere a little less glamorous—to Wilkes-Barre, Pennsylvania, for a Trump rally.

On October 10, 2016, my wife and I, along with our friend Leanne, drove to Wilkes-Barre’s Mohegan Sun arena. As soon as we entered the parking lot, the experience was the Full Trump. Bolus Towing Services from nearby Scranton had parked their decked-out Trump trailer right in front of the arena.

Though we arrived two hours early, the line to get in was already massive. Toward the back, a group of African-American locals were hawking Trump souvenirs. I assumed they were independent entrepreneurs until I saw another (white) man drive up and ask each one for a report on which items were “moving.” (Mainly the buttons, they said.) Everyone else in line was white. I should note that, throughout the evening, I never heard a racist comment.

My companions and I settled in and chatted with our line-neighbors about rallies past (Trump, presciently, had spent a lot of time in Pennsylvania); the perfidy of liberals, statisticians, and the Clinton family; and Trump’s finest debate zingers. I noted down some of the best bits of dialogue. I’m not a Trump supporter, and I found that embedding myself in the rally made me anxious, though not fearful. I felt like an unbeliever slipping into church to record people’s most intimate acts of faith. I was afraid they’d despise me as a cynic and a spy. But what I found most surprising, at least initially, was the unrelenting animosity toward Hillary Clinton. One father waiting in line with his two adorable young children wore a t-shirt that read, “Hillary is a c***.” (Spelled out on the shirt.) I was too disturbed to take a picture.

At one point, we heard titters pass through the line. Two women were walking by, one dressed as a caricature of Hillary Clinton in custody, her neck in a fake iron collar, a “Lock Her Up” sign covering her blouse, while her jailer-companion led her around by a plastic chain. I found the image so perfect in capturing the mood of disdainful resentment that I borrowed it for a character in my novel—a charming hustler dressed as The Witch in Chains.

In the arena, my friends and I made like teens at a concert and dashed to the floor to get as close to the stage as possible. The place was filling up, but there was still room to mill about, snap photos, and buy more signs and souvenirs. A man wearing a “Finally Someone with Balls” Trump t-shirt was doing a decent business hand-selling off-color Trump signs. The one referencing Monica Lewinski was the biggest hit.

Trump of course provided the ecstatic highlight of the evening. His speech was long, passionate, and either terrifying or thrilling, depending on your politics. The high point came when he called up to the podium a little kid in the audience dressed like Trump. He picked the boy up and asked. “You want to go back to Daddy or stay with Trump?” The kid answered, “Trump!” and the crowd went wild.

My neighborhood in New York City is hardly a hotbed of Trumpism, but of course I have friends and relatives who support him. No casual conversation with them could have prepared for me for this event. I thought I had a handle on Trumpists’ grievances, but what I had failed to understand was their depth of their affection. Trump’s hardcore supporters love him just as sports fans love their team—unconditionally, and with a physical passion that renders them giddy when he wins and miserable when he loses. Anything he actually does or fails to do in office means little in comparison. This became a major theme in my novel—what people want from politics is, above all, the emotional satisfaction of winning. As I put it in the novel, not policy, but victory.

As we drove back that night, my wife said, “Did you see those lines? Did you hear those people? Trump’s going to win.”

Not for the first time, I was wrong and my wife was right.

After Election Day brought the greatest political surprise of our lifetimes, I had to rewrite the novel yet again. I decided I was tired of being behind history. So I came up with an all-new premise. This time, reality-TV star and real-estate tycoon Carlton Chomp has already been elected President, but he shocks the world once more by, suddenly and mysteriously, quitting. But the lure of political power and adulation proves too strong, and so he begins his comeback, even stranger and potentially more momentous than his initial rise…

I’m pretty sure mine is the first novel that starts with Trump’s resignation. The Ex-President was just published this week. We’ll see how long my story stays ahead of history.

Formerly an editor and writer for Frommer’s travel guides, Jeff Soloway is now an executive editor in New York City. In 2014 he won the Robert L. Fish Memorial Award from the Mystery Writers of America. His Travel Writer mystery series is published by Alibi, Random House’s digital imprint for crime fiction. The third novel in the series, THE EX-PRESIDENT, about the resignation and mysterious comeback of America’s new billionaire President, just came out.