A sci-fi thriller, a novel of psychological suspense, a gripping story of wealth and corruption, a tension-packed political expose, and the eighth book in a compelling military series—their stories couldn’t be more different, but the authors of the five nominated books in the International Thriller Writer’s Best E-Book Original award category share one common emotion: gratification.

Writing can be a solitary experience, and as the writers note in their interviews below, having the support of an organization as prestigious and supportive as the ITW has been paramount in their success—whether it’s through creating a sense of welcome, providing the opportunity to attract greater readership, or by simply offering a camaraderie among peers.

This month, the nominees took a few moments to chat with The Big Thrill about their books, their influences, and what this nomination truly means.

Growing up in a small village in Ireland, Caroline Mitchell dreamed that her books would one day be read across the globe. But even then, she never imagined that she’d be traveling to New York this July because one of those books would be shortlisted for a special prize.

That dream became a reality when Mitchell learned that her novel WITNESS had been nominated for the International Thriller Writers Best E-Book Original award—and she couldn’t be more grateful.

“Thanks to the ITW and my publisher, Thomas and Mercer, my work is reaching more readers than ever before,” she says. “I had to read the notification email three times for it to sink in.”

In the book, Mitchell’s protagonist is forced to witness a crime for each year her ex spent in prison—and she must choose the victims before it defaults to someone she loves. A frightening premise to be sure, but Mitchell is used to writing—and reading—about terrifying situations.

In fact her first novel, Paranormal Intruder, is based on a chilling true story. 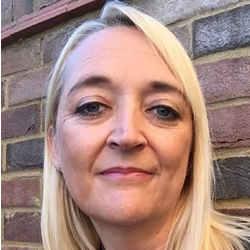 “I was working as a police officer in uniform one day when my husband called me to say something very strange was going on in our home,” she says. “For the next few years, we were subject to the most terrifying experiences you could imagine, by what we could only describe as an unearthly entity in our home.”

If not for the fact that so many of her colleagues had witnessed the same events, Mitchell admits she might have fallen apart. “Instead, I recorded my experiences by writing a book.”

To find out more about WITNESS, Paranormal Intruder, or the other books in Mitchell’s impressive body of work, check out her website. 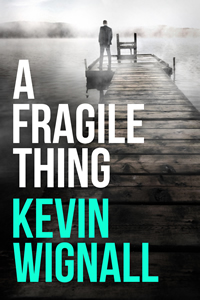 Kevin Wignall was so busy sifting through shortlists for the names of friends who’d been nominated that he almost missed the fact that his novel A FRAGILE THING had been given a nod for an International Thriller Writers Best E-Book Original award.

“I write books that don’t always conform to the general expectations people have of mystery or thriller novels,” he says. “So for an organization like ITW to recognize what I’m doing in this way is particularly gratifying.”

A FRAGILE THING is Wignall’s eighth book, his career as a writer beginning with the publication of his first novel in 2001, and showing no signs of slowing—particularly with this award nomination and an idea factory of an imagination that churns out premises that are as intriguing as they are chilling. 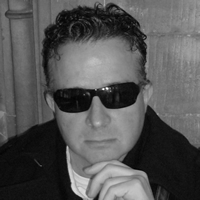 Wignall first described A FRAGILE THING to his editor as The Godfather meets The Great Gatsby—and admits, there’s still some truth to that. “It’s a story of wealth and corruption, of family feuds, and a young man who’s gained the world, but lost his soul.”

Pretty dark for a self-proclaimed fan of Jane Austen.

For more about Wignall and his books, check out his website.

Alan McDermott isn’t a fan of flying—so boarding a plane to New York this July will take him completely out of his comfort zone. The sacrifice is worth it, though, since he’ll be attending Thrillerfest to see if his nominated book TROJAN takes the top prize for the International Thriller Writers Best E-Book Original award.

“When I started writing, it was to earn a few extra bucks to pay the bills,” he says. “I never imagined I would be nominated for an award, never mind shortlisted. Even now, I’m surprised someone chose TROJAN to get this far.”

The book itself is on a fast track—a tension-packed will-they-won’t-they story as M15 battle to prevent a chemical attack in the heart of London. If you’re picking up a Tom Clancy vibe, you’re on the right path. McDermott calls the author the “king of the political thriller” and has read each of his books twice. 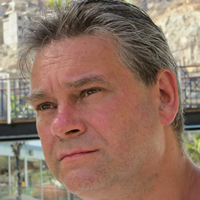 “I’ve always wanted to write something of his caliber, and the ten books I’ve written so far have been practice,” he says. “I intend to take a few weeks off in the autumn and plot out something he’d be proud to call his own.”

Or at least be intrigued enough to join McDermott for dinner, where they would dine on steak with peppercorn sauce. But definitely not seafood—McDermott can’t stand it.

To add all of McDermott’s books to your TBR, check out his Goodreads page.

Jeff Gunhus has spent many years at the Thrillerfest awards banquet, quietly dreaming that something he’d written would one day be worthy of a nomination. Turns out, this year is that day.

“I write because I love it,” he says. “Acknowledgement that the work isn’t terrible is gravy—but it’s great tasting gravy.”

And even more delicious that the nod comes from an organization that has been instrumental to his writing journey. He’s attended Master Craftfest with Steve Berry, sat in the all-day FBI seminar, and taken part in the online thriller school—a fully immersed student of ITW.

“I’ve always felt welcome at ITW,” he says. “Whether from the other writers and instructors or the incredible Kimberley Howe, who makes everyone feel like Thrillerfest was created just for them. This nomination further validates the value of Thrillerfest and amplifies the sense of belonging ITW fosters.”

Inclusivity is important to Gunhus, who admits his foray into writing began as a way to get his oldest son excited about reading—he actually wrote and published a six-book fantasy adventure called Jack Templar Monster Hunter where he and his brother star as the main characters. 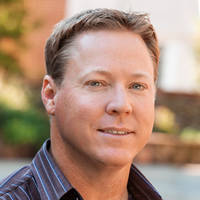 “While my writing for adults is fun, my favorite emails are still from young readers who stumble across the Jack Templar series, and their parents who swear their son or daughter hated to read before finding my books,” he says. “That’s the greatest compliment.”

Well, unless RESURRECTION AMERICA takes the top award this July at Thrillerfest—then it might be a bit of a toss-up.

“I must be doing something right,” he says. “Writing, especially when you’re independent of a publisher, can be quite a lonely experience at times, so validation by your peers means a lot.”

SECOND CHANCE is the eighth book in his series about military veterans Ryan Lock and Ty Johnson. The plot zeroes in on Lock, who is the target of someone hell bent on revenge. It could be anyone, really—as a former military bodyguard, Lock has made his fair share of enemies.

Black admits the pacing and action is influenced by one of his writing idols, Don Winslow—someone he’d not only like to emulate as a writer, but would love to chat with over dinner—“whatever the hell he wanted, he’s Don Winslow”—where the conversation would inevitably turn to Black’s non-writing hobby.

“I just started competing in Brazilian Jiu-Jitsu,” he says. “As a forty-something above-knee amputee.”

Read about all eight of Black’s novels in the Lock and Johnson series on his website.