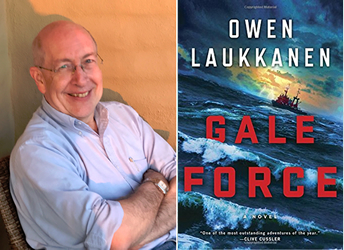 Owen Laukkanen grew up in a family that loved the sea.

His grandfather was a fisherman and boat builder; his uncle has been a commercial fisherman all his life; and his father, a medical man, eventually bought his own boat and spends his summers lobster-fishing off Prince Edward Island in Canada.

Laukkanen himself spent plenty of time on those boats and “they were the happiest summers of my life–and perfect for an aspiring writer. The sea is either tedious or really, really exciting, and during the tedious times, sailors tell the best stories. Every summer, I would come off the boat with a tan and a host of new experiences, and a notebook full of ideas.”

After a few years as a correspondent for a poker website (that’s a whole other story), Laukkanen put those ideas to use in an acclaimed series of novels about a Minnesota odd couple–a veteran BCA state investigator named Kirk Stevens and a hotshot young FBI agent named Carla Windermere–who worked cases at first separately, then together, then as the lead investigators of a joint FBI-BCA violent crime task force. The six books, from The Professionals to The Forgotten Girls, were, in the words of one reviewer, “riveting, tense, and blazing-fast,” and dealt with topics from sex-trafficking to online predators to the consequences of the 2008 economic collapse. Major recognition, including nominations for the Anthony, Barry, and ITW Thriller Awards, soon followed.

The Gale Force itself is a deep-sea salvage boat based in the Pacific Northwest. Its captain, McKenna Rhodes, took over the boat after her father died in a terrible maritime accident, and the tragedy’s made her cautious, afraid to take big chances, until the day a Japanese freighter founders 200 miles out, giving her one last chance at a big payday. But there is a monster storm brewing, a more powerful rival is racing her for the prize, and on that ship is the greatest danger of all: a man desperately on the run with $50 million in bearer bonds stolen from the Yakuza. Soon, they will all collide, and Rhodes’s ship, her way of life, even her life itself, will be on the line.

Why did Laukkanen make his protagonist a woman? “You just don’t see that kind of character in this kind of novel. Sea adventures aren’t typically estrogen-laden. Neither is the tugboat industry as a whole. I liked the idea of this scrappy underdog captain and her crew pushing up against the old boys’ club.”

There were a few real-life inspirations, including Laukkanen’s Aunt Suzi, a lifelong commercial fisherwoman; Linda Greenlaw, the captain and author featured  in The Perfect Storm; and a woman he met on a train from Seattle to San Francisco: “She ran a large trucking firm, which she’d started as a single mother of four, after her husband abandoned her, and her stories of trying to make a go of a tiny trucking enterprise in rural Idaho—struggling to feed her family while her male-dominated competition did everything up to and including gross sabotage to derail her—really struck a chord with me. It takes a hell of a lot of spirit and guts to persevere in a situation like that, and I thought of her when I was creating McKenna.”

But GALE FORCE, the book, presented its own challenges to write. At first, he envisioned it as “a pulpy paperback thriller,” but the deeper he got into it, the more he realized he needed to alter the style and story—to be big, yes, but also realistic to life at sea. “It’s difficult writing about the ocean in a way that conveys the immense power and continual danger without getting repetitive. One of the worst feelings I’ve ever had was a day when I was horribly seasick. It’s awful because there’s no escape, you’re just getting your butt kicked, wave after wave after wave, but it’s tough to convey that without getting monotonous. And on the other hand, if you’re stuck at sea in a storm for a day, it’s a brutal, exhausting, often terrifying experience—but you can’t fill a book describing a steady procession of 60-foot waves. The narrative needs a rising tension. It needs twists, turns, complications.”

To help supply some of those complications, he added a character named Court Harrington, a “naval architect”—a term I’d never heard.

“You can look at a ship as a structure like a building, and every structure needs someone competent to design it. Naval architects are the people who put together the blueprints, and in salvage, they’re in many ways the most valuable member of the team, because it’s up to them to look at a half-sunk ship and determine how, exactly, it can be un-sunk. These days, that involves a lot of high-powered computer modeling, but in order to feed those models, you still need the raw data. And it’s often up to the salvage team to risk their lives venturing aboard those sinking ships to obtain that raw data. That’s where the drama comes in!”

And he knows drama. Besides GALE FORCE and the Stevens and Windermere series, he’s also written two “wildly inappropriate” YA novels under the name Owen Matthews—a “Scarface in a high school” called How to Win at High School” and a “Gossip Girl with bombs” called The Fixes. Why? “I found you can take a few more risks with YA fiction, and so it’s been quite liberating.”

He’s also at work now on a novel featuring a pit bull from a rescue agency, much like his own dog, Lucy. Based on a real prison rehabilitation program in which prisoners train pit bulls to be companion dogs, it features just such a dog, the convict who trains her, and the Marine with PTSD who inherits her. When the convict is released, he learns that both the dog and the Marine are in trouble, and sets out to rescue them: “I think of it as a Jack Reacher novel with a rescue dog, but that’s not quite it, because the convict is trying to be Reacher, but his damsel in distress is a combat-decorated U.S. Marine.”

With all these varied books and plots and ideas, I asked Laukkanen: What’s changed for you in your working process? What’s changed in your knowledge of publishing and feelings about the business? What would you most wish you could go back and tell your just-getting-started self? I was particularly interested in the answers, because—columnist’s disclaimer—I was his editor for many years. He replied:

“The biggest thing I’d want to tell any new writer is how important it is to divorce your internal sense of self-worth from any external accomplishments and goals. That is, don’t expect that book deal you’ve been chasing to solve all your problems.

“I’ve been very, very lucky in my career. But I can vividly remember the days after Criminal Enterprise, my second book, was released to critical acclaim and good sales and a whirlwind, glamorous, nine-city book tour. It was everything I’d ever wanted or aspired to as a writer. And I came home and sat down on my couch and felt miserable, because I’d attached so much of my sense of self-worth to this book, and now it was out and people were responding well to it, and I was still living in the same apartment, lonely, still not dealing with the depression I’d hoped my success would erase. Spoiler alert: It didn’t, and if I’d realized that sooner, it would have made me a happier person and, I’d wager, a better writer to boot.

“On a happier note, I have been really lucky to have been surrounded by smart, even-keeled people who know publishing better than I do, and who’ve been really good about giving solid advice when the rest of the publishing world seems convinced the sky is falling. So my advice to new writers is to find those people–agents, editors, and writing colleagues–and ask questions and listen to the answers.

“And I’ve been blown away by the generosity and sense of collegiality in the crime fiction community, from the top down. Authors like Lee Child, John Sandford, John Lescroart—people who could tell guys like me to kick rocks and be hurt not a whit by it—they do so much to help promote new and emerging talent. And it’s not just the big names. You would imagine that a writing community would be naturally hyper-competitive, given that we’re all in a sense competing for a book buyer’s dollars, but this is a friendly, kind, and unselfish group of writers who take legitimate pride in each others’ successes and who’ll bend over backwards to help each other without a second thought. It’s among the happiest circumstances of my life that I’ve fallen in with this wonderful crowd.”

And the feeling has been reciprocated. With the names mentioned above, Child called GALE FORCE “as good as thrillers get,” Sandford “a phenomenal read,” and Lescroart “as good a tale of mayhem and adventure on the high seas as I’ve read in years.”

Stevens and Windermere may have company in the awards column.