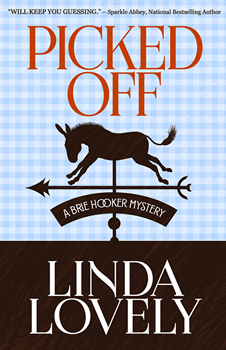 It’s been seven months since Brie Hooker, a vegan, moved to Udderly Kidding Dairy to live with her feisty Aunt Eva, a confirmed carnivore.

But tonight there’ll be no family feud over dinner entrees.

Udderly’s hosting a campaign fundraiser for Eva’s best friend, who hopes to be South Carolina’s next governor. The candidate’s son, a pro quarterback, is flying home for the wingding. And Brie’s eager to get a close-up view of the cute tush she’s admired on TV, even though she’s reluctantly sworn off even more tempting local beefcake.

The campaign fundraiser promises to be a huge success until a pitchfork attack turns the goat farm into a crime scene—again.

To protect her friends, Brie puts her sleuthing skills to work. Will she live long enough to find out who’s behind a vicious assault, a kidnapping, blackmail, and murder?

Author Linda Lovely spent some time with The Big Thrill discussing her latest mystery, PICKED OFF:

Humor is a powerful weapon to fight panic and pessimism in even the most dire circumstances.

Confirms once again that the “thriller” adjective can apply to novels that don’t include gore or explicit sex but do inject humor. Picked Off’s smart heroine fights down panic and uses her wits when she’s in danger.

Susan Isaacs for her ability to find humor in her characters’ thought processes and use it in first-person point-of-view. Janet Evanovich for mining situational humor. Lee Child for pacing. Robert B. Parker for believable dialogue that doesn’t require a lot of tags. Michael Connelly for subtle character development that doesn’t get in the way of plot. 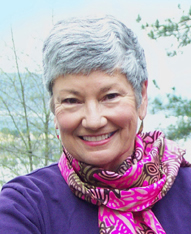 Over the past five years, hundreds of mystery/thriller writers have met Linda Lovely at check-in for the annual Writers’ Police Academy, which she helps organize. Lovely finds writing pure fiction isn’t a huge stretch given the years she’s spent penning PR and ad copy. She writes a blend of mystery and humor, chuckling as she plots to “disappear” the types of characters who most annoy her. Quite satisfying plus there’s no need to pester relatives for bail. Her newest series offers good-natured salutes to both her vegan family doctor and her cheese-addicted kin. She served as president of her local Sisters in Crime chapter for five years and belongs to International Thriller Writers and Romance Writers of America.