In the darkening days of autumn, a woman’s body is found in the isolated terrain near Glacier National Park. The victim was a journalist who had been interviewing a reclusive researcher about his work for a program that trains dogs to track scientific data. Now he is the prime suspect.

Without friends or family to turn to, he seeks help from his ex, an FBI investigator and the mother of his young daughter. Though she is not assigned the case, she is deeply invested, driven by the knowledge that if she can find out what really happened, she might save her child from the trauma of losing a father.

Assuming the worst possible outcome, the researcher flees into the woods with his dog. As the evidence mounts against him and his resources dwindle, the FBI agent isn’t sure how far she’ll go to find answers.

Propulsive and suspenseful, evoking the stark, breathtaking beauty of Glacier National Park, A SHARP SOLITUDE demonstrates that we can never outrun our demons, even in the vast, indomitable wild.

Award-winning author Christine Carbo took time out of her busy schedule to discuss her latest installment of the Glacier National Park thrillers, A SHARP SOLITUDE:

The concept of going west and moving closer to nature and going into the wild has a certain draw for all types of people, and at times, there’s this myth that being in the wild or connecting with nature can help solve one’s problems. Sometimes it can, but I wanted to explore what happens when domestic crime and suspense meets the wild. A SHARP SOLITUDE demonstrates that we can never outrun our demons, even in the vast, indomitable wild.

I did some research into gun-related accidental shootings for this book (please see below), and I was surprised to find that one of my main characters, who experienced an accidental shooting as a child, tries to remain neutral in the face of gun control debates, almost as a coping mechanism. And I wasn’t surprised by what I’m going to say next, but my suspicions were confirmed that once a person is on one side of the argument and has dug their heels in, they rarely switch sides. Very few change their minds, even when they listen firsthand to the tragedies that have occurred on both ends of the spectrum.

I love to give my characters interesting backstories, and both my female and male protagonists come from dramatic backgrounds. My male character experienced a tragedy as a child. It involved an accidental shooting in which he killed his best friend after finding a loaded gun under his parents’ bed. It was interesting to explore some gun-control related topics without being political or preachy, and of course, when I wrote this, guns were sadly not as much in the spotlight as they are now since the Parkland shooting. Since I’m from Montana, a fiercely independent state that loves its firearms, I walked a fine line in how I handled the topic and integrated it into the emotional fabric of my characters.

I came to crime fiction late after reading a Dennis Lehane mystery in my early thirties. I remember being taken with his ability to write poignantly while still propelling the story forward through the who-dunnit aspect. It was then I realized I was going to love crime fiction, and since then, I have. Most of my spare reading is in the genre. I feel as though I have a lot of catching up to do to expose myself to all the greats: past and present. And since I am playing catch-up a lot, I often skip around from author to author. Some of my favorites, besides Lehane, have been Tana French, Tom Franklin, Donna Tartt, Daniel Woodrell, Mo Hayder, Michael Connolly, Denise Mina and Elizabeth George. My tastes vary, but I do admit I possess a love of the lyrical and lean to the darker side. I also force myself out of crime fiction once in a while so that I can try to keep a semi well-balanced diet, and I learn a ton from writers outside the genre. After all, every fiction book must provide the reader with a need to find out what happens next so that they keep turning pages. Therefore, I find it interesting how books outside of genre fiction are able to keep readers turning pages based on the mysteries of their characters’ circumstances and emotions. I learn a lot from that too. 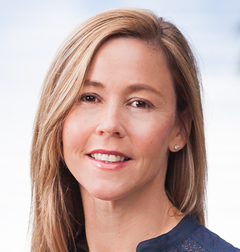 Christine Carbo is the author of an ensemble series set in and around Glacier National Park. Her books include The Wild Inside (2015), Mortal Fall (2016), The Weight of Night (2017) and her latest, A Sharp Solitude (May, 2018, Atria Books). She is a recipient of the Womens’ National Book Association Pinckley Prize, the Silver Falchion Award and the High Plains Book Award. After earning a pilot’s license, pursuing various adventures in Norway, and working a brief stint as a flight attendant, she got an MA in English and taught college-level courses. She still teaches, but in a different realm as a Pilates instructor. She and her family live in Montana.