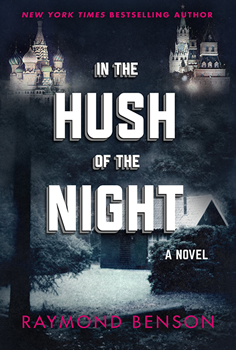 Raymond Benson is the author of six James Bond novels, but he loves writing about FBI agent Annie Marino – the character from his new thriller IN THE HUSH OF THE NIGHT – even more than 007.

“She’s the head of the human trafficking unit in the Chicago field office,” says Benson, who wrote the Bond novels from 1996-2002. “Smart, tough, and single—and she takes tap dancing lessons outside of work for fun. I was fortunate to be able to spend time with the real head of the human trafficking unit in the FBI Chicago field office, and she read the finished manuscript.  She said I ‘nailed it’, so if I never receive any other praise for the book, that will be enough.

“I always prefer writing my own original books and my own characters to writing for established series.  The latter is good work-for-hire bread-and-butter money, and that’s why many of us ‘tie-in’ writers do it.  But the original books are more satisfying.”

IN THE HUSH OF THE NIGHT takes a harrowing look at the issue of human trafficking of women – focusing on the plight of a pretty young Russian woman named Yana whose dream escape to America quickly turns into a nightmare.

“The story grew out of an initial idea of a young man named Jason whose future in-laws are not what they seem,” Benson told us.  “Jason is about to be married but there are some odd things about his in-laws, especially his future brother-in-law.  Jason eventually became the secondary character as the plot developed, and the female FBI agent, Annie Marino, became the protagonist. I really didn’t know this was going to be about human trafficking until I started to outline the story.  This is one of those cases in which I discovered that’s what the story was about after I’d begun writing!”

Benson has talked in the past about how important it was while writing the James Bond books to create the right villain. He’s certainly come up with a scary bad guy – actually more than one – in this new thriller.

“The villain is always harder to create than the hero or heroine.  One important aspect of a good villain is that he or she must believe they are in the right.  A believable villain doesn’t think, “Oh, I’m really evil!”  They think they’re the good guy!  For “IN THE HUSH OF THE NIGHT,” as I’ve said, the villain started as a scary in-law and he grew from there.”

Benson also recently wrote “The Black Stiletto” series – five books about a tough woman hero in Judy Cooper who becomes a female vigilante fighting crime in the late ‘50s.  Why does he like writing female-driven thrillers?

“It’s just something that has developed over time!  I joke that I used up all my testosterone writing James Bond, so now I write women protagonists.  “IN THE HUSH…” is my 11th novel with a female protagonist, and I think I’m getting pretty good at it.  I’m channeling my inner Ingmar Bergman (the great Swedish film director who wrote outstanding roles for women)!”

Benson looks back fondly on his years writing the James Bond series. “I traveled the world, met a lot of incredible people, and enjoyed a position that very few authors have had.  I don’t take any of it for granted.  More people have walked on the moon than have written official Bond novels.  I’m honored to be in such a unique club.”

Benson got the Bond writing assignment after he had published an Edgar-nominated book in 1984 called “The James Bond Bedside Companion,” a coffee-table-style history of the Bond phenomenon, including a bio of creator Ian Fleming.

“I went to the U.K. for research, met members of Fleming’s family, his friends/colleagues, his business people… and when it came out, his estate liked it and we stayed in touch.  Ten years later they asked if I’d be interested in taking over from John Gardner, who had been writing the books and wanted to retire.  It was a dream come true that I didn’t think I was even allowed to dream.”

He also did several other James Bond projects, including novelizations of Bond movies and Bond short stories.

But, in addition to writing all these thrillers and other stuff (he’s put out more than 35 books), Benson has had an incredibly multi-faceted career – including music, plays and screenplays, computer games, teaching and much more.

“The Long and Winding Road, to quote the Beatles.  The Bond gig (1996-2002) was certainly the highlight, but there have been many high points.  My theatre work as a young man in New York City in the late ‘70s and ‘80s was very exciting and enlightening.  The computer gaming work honed my skills as a creator of fiction.  My love of film developed over five decades such that I’m now a film history instructor at a college, as well as half of a film lecture team that has been presenting live shows a la “Siskel & Ebert” in the Chicago area for eleven years (“Dann & Raymond’s Movie Club”).  I play piano at various venues for fun and pocket change.  I don’t think I can sit still.  It can be difficult to turn off my brain at night.”

“A joke I always say is that there was no money in theatre, so I became a writer!  (Ha ha.)  But that’s pretty much how it happened.  While I loved directing plays and musicals and composing music for shows in New York, there was no money in it.  The James Bond Bedside Companion happened, and that set me on a different path.  I never had aspirations of being a writer when I was a kid, I just fell into it.”

So what’s next for Benson?

“I have a new stand-alone novel that is finished and hopefully will be sold by the time this interview is published.  It’s set in Hollywood and covers a mystery in two different decades—the ’40s and the present—and involves many of the black entertainers of Old Hollywood.  After that… who knows?”