A Date With Jessica Fletcher 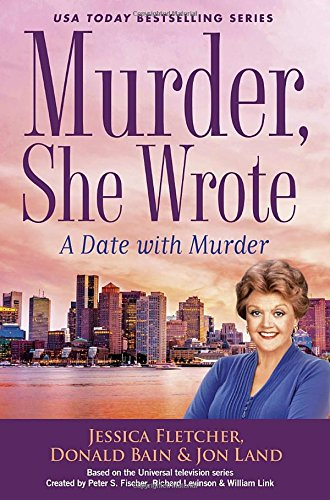 America loves Jessica Fletcher, the iconic fictional author and amateur sleuth who stars in the beloved Murder, She Wrote series. Like the television show, this cozy mystery series, which takes place in idyllic Cabot Cove, Maine, has enamored fans for years. Originally written by Donald Bain (alongside the fictitious Jessica Fletcher), the series has a new author—thriller writer Jon Land.

Land took over Bain’s work-in-progress, A DATE WITH MURDER, and will be continuing the Murder, She Wrote tradition. The series is in excellent hands. This latest installment is an exciting mystery that maintains the spirit and charm of its predecessors while delivering the tightly-woven plotting and the riveting suspense for which Land is known. Topshelf Magazine had this to say: “Featuring all the beloved characters that fans love, A DATE WITH MURDER is a killer cozy, boasting a masterfully crafted plot, fast-paced scenes, nail-biting suspense, and a heaping helping of old-fashioned justice. Longtime fans of Murder, She Wrote mysteries will revel in this latest installment.”

When asked how he received this prestigious engagement, Land, whose work includes the acclaimed Caitlin Strong thrillers, is humble. “It’s the classic case of one man’s misfortune becoming another man’s gain,” Land says. “The great Don Bain had written the first 46 books in the Murder, She Wrote series. But he had fallen ill and was no longer able to continue, then subsequently passed away. Since we share the same agent in Bob Diforio, Bob thought I would be a great choice to replace Don. He called me just after Don fell ill, and it took me all of five seconds to say, yes, I’d most definitely be interested. Opportunities like this just don’t come up very often.”

Indeed, they don’t come often—but Land is up for the challenge. A DATE WITH MURDER deals with online dating—a very modern and timely issue. Land inherited the concept because it was already a work-in-progress when he took over the series, but he put his own mark on the project from the beginning. He acknowledges that it’s important to ensure loyal Murder, She Wrote readers are satisfied while capturing new readers—no easy feat.

“Maintaining the delicate balance between keeping a series fresh and engaging new readers means giving longtime fans everything they expect while dressing it up in a new package,” Land says. “These books are often referred to as ‘cozies’, and while I’ve tried to keep reasonably to that comfort zone, I’ve also remained true to my own roots as a thriller author. So I think my take is a bit more hardboiled, as much Robert Crais in some cases as Agatha Christie.  That includes a faster pace and a bit more complex plotting. But all that is wrapped around the cast of characters the fan base has come to know and love.”

And that cast includes Jessica Fletcher. Writing from Jessica’s point of view provides Land with an interesting perspective on the amateur detective, and Land is intrigued by her zeal. “The thing I like most about her character is her passion, both for her craft as a writer and, even more, for solving crimes to help someone(s) close to her. The thing that’s great about Jessica is that, unlike the typical hardboiled mystery top-lined by a professional detective, it’s always personal for Jessica. The crime she’s investigating, normally murder or an extension thereof, hits very close to home indeed. The fun here is that it allows me to explore what she’s thinking and feeling through internal monologues and ruminations on her life and career.” Land points out that Jessica Fletcher has no real family of her own, which makes her more dependent on friends for emotional support. “She’s exceptionally protective of those she’s close to, inevitably putting their needs ahead of their own. An admirable trait for sure, but in Jessica’s case it tends to put her own life repeatedly in jeopardy.”

And that jeopardy—and Jessica’s ability to escape it—is, of course, part of what makes the series so much fun. Like its protagonist, the setting of Cabot Cove has seen its share of mayhem. But just how much crime can one small town in Maine handle?

Cozy mysteries can be viewed as a contract between author and reader. The writer does her or his best to keep it fresh and believable, and the reader agrees to suspend disbelief.

Land agrees, but says there’s more to that explanation. “One of the things Don had started to do that I’m really honing in on is the changing nature of Cabot Cove itself. In A DATE WITH MURDER, I describe the once bucolic town as rapidly becoming the ‘Hamptons of New England’, at least in summer. The changing nature of the town comes with its own set of dynamics and pitfalls I explore in that book and even more in my third entry in the series, Murder in Red.”

This, according to Land, can help explain the ongoing issues one small town must deal with. He says, “So when you add real estate development, gentrification, money—both old and new—coming to town, you give yourself all kinds of new openings when it comes to continuing to grow the series and making credible the fact that Cabot Cove truly is the murder capital of the world.”

And from the look of things, Murder, She Wrote fans can be happy that Cabot Cove will continue to be the murder capital of the world for a long time into the future. In fact, Land’s second Murder, She Wrote novel, Manuscript for Murder, will be published in November 2018, and Murder in Red after that.

That’s not all Land has on his plate. “I have a nonfiction project that makes the case for the future in football called 1st and Forever coming out in August that I couldn’t be more excited about,” Land says. “And finally my next Caitlin Strong thriller, Strong as Steel, releases in April. It’s the 10th book in the series and my publisher Forge moved it from its normal December slot to give us more time to plan accordingly.”

My Mother’s Secret by Sanjida Kay