IRS agent-turned-PI Mortimer Angel is relaxing in a hole-in-the-wall bar in a Reno casino when an attractive young girl hires him to find out who left her a cryptic message demanding a million dollars. At the girl’s house, Mort finds the body of missing rapper Jonnie Xenon―Jo-X to his legions of fans―hanging from the rafters with two bullet holes in him. Mort is shocked when he learns the identity of the girl’s father―and even more shocked when the father hires him to investigate the murder.

Mort, being Mort, accumulates a few felonies as he follows the clues to Las Vegas. And along the way, he picks up an alluring young assistant who changes his life―in every conceivable way.

Author Rob Leininger took time out of his busy schedule to meet with The Big Thrill and discuss the third installment of the Mortimer Angel series, GUMSHOE ON THE LOOSE:

A few hours of pure enjoyment. The Mort Angel books are humorous and bawdy with more than a hint of real danger by the time the dust settles.

The Mort Angel novels are . . . different. Mort isn’t yet a “real” private eye. He’s an ex-IRS agent in training with an actual private, but he’s the focus of the story. He doesn’t really know what he’s doing, but he gives it all he has, and then some. And he gets results. And national recognition.

Yes. As Mort Angel says, “Girls flock to me like pigeons to a statue.” I find it surprising that this has never happened to me. Not sure why not.

Mort seems to find himself involved with more women than any man has a right to have in one lifetime. It appears that leaving the IRS was a good career move. It’s tongue-in-cheek, but a hell of a lot of fun.

First and foremost, as with other writers, John D. MacDonald, simply because he was a fantastic writer. Also, Edgar Rice Burroughs when I was in high school, the “Mars” books in particular. More recently: John Lescroart because the Dismas Hardy books are not only excellent, they are also a series. And John Sandford, who writes novels that are fun and really move. 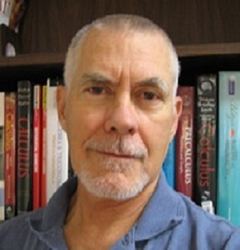 Rob Leininger joined the US Navy for seven years, spent one of those years at McMurdo base in Antarctica on Operation Deep Freeze, earned a mechanical engineering degree and spent five years working to keep the wings on airplanes. He gave that up to write novels, wrote Black Sun (Avon Books, 1991), and Killing Suki Flood (St. Martin’s Press, 1991). He taught high school math for thirteen years in Reno, Nevada, then retired to Montana with his wife and three golden retrievers to continue his writing career. GUMSHOE ON THE LOOSE is the third novel in the Mortimer Angel series.

To learn more about Rob, please visit his website.