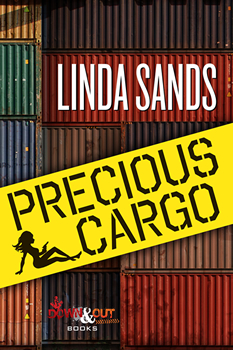 Linda Sands talks fast, the words spilling from her mouth in a torrent, as if there isn’t enough time to get everything said, much less everything done. You won’t find grass growing beneath her feet, that’s for sure. And if it seems as if she’s in perpetual motion, well, that’s because she is.

For instance, if you’d been looking for her the last Sunday in February, you’d have found this Georgia Author of the Year and two-time Silver Falchion winner in Atlanta attending a NASCAR event. It’s not so much that she’s in love with fast cars, although she can probably take one apart and put it back together (I’m not sure about the blindfolded part); it’s that she’s heavily into researching her next Jojo Boudreaux novel, Checkered Cargo, while the second in the series, PRECIOUS CARGO, is ready to hit bookstores in April.

In PRECIOUS CARGO, Boudreaux and her co-driver and boyfriend, Gator Natoli, are at a truck stop in Austin when they’re approached by a frightened young girl who begs them for a ride. After delivering her to safety, they run into her again in Oklahoma City. Only this time, she doesn’t want to be saved and Jojo and Gator wind up getting involved with the Somali Mafia, where powerful people manipulate a hundred-billion-dollar industry of prostitution, drugs, and international sex trafficking.

The Cargo series came about accidentally. Sands, who became fascinated by truckers and the life they lead, had been working on a nonfiction photo essay book on them. She was living in Northern California at the time, and her neighbor was a long-haul trucker. Tired of being awakened by the noise of his truck parked in front of her house, Sands knocked on his door to ask him to park it elsewhere.

“He was this very large man who looked kind of mean, but he turned out to be just the opposite,” she says. “His name was Grisly, and he became my pal. He showed me his truck, and I was hooked. I photographed the cab and the area where he slept, and realized this would make a wonderful coffee table book.”

She started a Facebook page called Modern Day Truck Drivers and began visiting trucking shows across the country, where she interviewed and photographed truckers. Her agent didn’t handle nonfiction but asked if maybe there wasn’t something else brewing there, like a murder mystery?

“That’s how the Cargo series came about,” Sands says.

Sands grew up in Baldwinsville, a suburb outside Syracuse, New York. She’s the middle of three girls, but she was definitely the “boy” of the family.

“I was an outdoors kid, a total tomboy. I hunted and fished with my dad. I had my own dirt bike, and I played with the boys in the neighborhood.” Sands says she was athletic but didn’t care for team sports. “I didn’t want anyone to be disappointed because I did something to lose the game.” Instead, she ran track and participated in gymnastics.

As a child, Sands was a voracious reader who haunted the library, which is where she had her first brush with crime by smuggling books out. “If we were only allowed to take six books out, I’d sneak out a couple more,” she says. “I always brought them back, though.”

Her love for reading eventually led to her writing flash fiction, free-form poems, and even greeting cards. In 1994, following the birth of her first child, she began writing a children’s book. “I also started selling short stories to children’s magazines,” she says, “as well as essays about mothers and children, with kind of a comedic bent.”

The idea for her first novel, Simple Intent, came from a story she heard at a cocktail party.  “I’d been reading crime fiction since I was ten years old,” Sands says. “I loved puzzles. I loved a good heist story. And I thought this story made for a great legal thriller. But I didn’t know anything about the law or the courtroom, so I’d hand what I’d written to an attorney friend, just to make sure what I was writing was correct.”

PRECIOUS CARGO sprang from a visit to a trucking show in Louisville. “One of the most popular booths was one where they handed out information on how to identify someone who’s being trafficked, or taken advantage of. I learned all about the women who hang out at truck stops and how in many cases these women wind up as modern-day slaves, being moved from truck stop to truck stop, hooked on drugs, or victims of emotional or physical abuse. It’s very dark and very creepy, but it’s a real problem and I hope people learn something about trafficking and that if something doesn’t look right, to report it.”

Sands also hopes her series will shed new light on an often-misunderstood profession. “I hope readers will better understand how important the trucking industry is to this country—to all countries—and that they won’t categorize truckers as ‘bad guys’, but rather as wonderful human beings who make your life possible,” she says. “And maybe you won’t curse as much the next time you’re stuck behind a slow-moving semi.”

Georgia Author of the Year Linda Sands is the multiple award-winning author of five books in four genres. Always on the hunt for unique characters, fabulous settings and compelling storylines, Linda divides her time between the suburbs of Atlanta, the beaches of The Emerald Coast and a secret place in the Blue Ridge Mountains.