One of the reasons I so enjoy books set in other countries is that they take me places I can’t afford to visit. (Wait, you thought writers made money?) As you can see from August Thomas’ answer to the first question below, her debut novel, LIAR’S CANDLE, delivers. But beyond the descriptive writing, her book checked all the boxes – great protagonist and a keep-you-on-your-toes plot, leavened by some laugh-out-loud passages. I can’t wait for her next one.

Among the many things I love about LIAR’S CANDLE are the depictions of Turkey. You made me want to jump on the next plane for Istanbul. Please tell us about your time there, and also what drew you to Turkey in the first place.

I loved the time I spent in Turkey. I first went there for my 16th birthday, on a bus tour with my mother. Before then, I could barely find Turkey on a map!

We touched down in Istanbul the day after I turned 16. Over the next two weeks, we traveled 2,400 miles overland – from the bazaars of Istanbul to the underground cities of Cappadocia and the spectacular ruins of Ephesus. We watched dervishes whirl in a rose-covered caravanserai, ate fresh roast lamb by the roadside, took a ferry across the Dardanelles to the ruins of Troy, and drank scorching glasses of tea in the gardens of the sultans’ palace. Of course I wanted to discover more about this place!

The next semester, I started learning Turkish. When I was 18, I spent the summer in Ankara on a Critical Language Scholarship. I got to meet officials from the U.S. Embassy and the UNHCR; we even went inside the ruling AK Party headquarters. A schmoozy AKP politician gave us watermelon and told us about Turkey’s “zero problems” policy with its neighbors (Syria, Iraq, Iran, etc.). The world looked very different in 2009.

After a summer in Istanbul, I returned to Turkey at 21 as a Fulbright Scholar. I bought my Christmas tree behind the Spice Bazaar that year. I drank sumac sherbet on a rooftop in Mardin, and watched the lights across the border in Syria. I did my homework in the waterfront gardens of Küçüksu Palace. When Obama was reelected, I came home from the U.S. Consulate’s party at six o’clock in the morning, eating a purloined Krispy Kreme as my ferry zig-zagged from Asia back to Europe. Sure, I broke my foot, and ended up in the ER often enough that two triage nurses friended me on Facebook.  But I will always be grateful for that year.

In addition to the wonderfully descriptive details about Turkey, you write very convincingly about weaponry—everything from Walther 99s to Hellfire missiles—as well as flying an Apache helicopter and parachuting out of one. How did you come by that knowledge? Crazy amounts of time on Google or actual experience?

I learned to shoot when I lived in Scotland – where shooting as a hobby coexists happily with common-sense gun safety laws. I once missed out on winning the wooden spoon (joke prize for being the worst shot in the club) by merely being the second worst shot.  I was disappointed – I was in the midst of a baking phase and coveted the spoon.

Descriptions of serious military hardware involved a boatload of research. At one stage, I downloaded and studied a several-hundred-page manual on how to fly Apache helicopters.  Heaven only knows how many watchlists I am probably on now. I started getting targeted YouTube ads for holsters you can wear inside your pants. 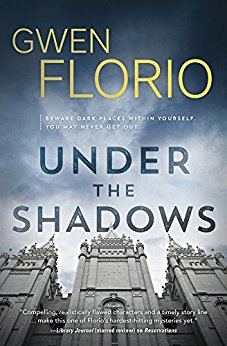 Likewise the inner workings of the diplomatic corps and the CIA—any experience with either? Is being a novelist just a particularly unwieldy cover?

That would be a very elaborate cover indeed.  Actually, when I lived in Turkey, I was very impressed by the U.S. diplomats I met – intelligent, hardworking, conscientious people.  I was even accepted for the internship Penny does in the book. I declined, but kept thinking about it. I began LIAR’S CANDLE a few months later.

How long since you’ve been to Turkey? Do you return often or at all? And when you’re here, what do you miss most about Turkey?

I was last in Turkey in July 2015, so not since the 2016 coup attempt, and the deplorable human rights abuses that followed.

I miss the little shore-hopper ferries on the Bosphorus, and the breathtaking historical sites, and the bazaars, and the food (fig pudding with buffalo milk at my neighborhood cafe…), and all the wonderful people, Turkish and “yabanci” (foreign) who I knew there.   I often think of a heart-aching quote from Lady Mary Wortley Montagu, a wonderful 18th c writer who spent a few years in Turkey in the early 1700s in her mid-20s. This is what she wrote when she came back to England, after her adventures in Istanbul:

“All we get by [traveling], is a fruitless desire of mixing the different pleasures and conveniencies which are given to the different parts of the world, and cannot meet in any one of them… And, after having seen part of Asia and Africa, and almost made the tour of Europe, I think the honest English squire more happy, who verily believes the Greek wines less delicious than March beer; that the African fruits have not so fine a flavour as golden pippins; that the Beca figuas of Italy are not so well tasted as a rump of beef; and that, in short, there is no perfect enjoyment of this life out of Old England. I pray God I may think so for the rest of my life; and, since I must be contented with our scanty allowance of day-light, that I may forget the enlivening sun of Constantinople.”

Actually, when LIAR’S CANDLE sold, I was in Bulgaria, as part of an 800-mile month-long shoestring journey across eastern Europe, following in Lady Mary’s footsteps!

I so enjoyed your protagonist, Penny Kessler, an idealistic intern at the U.S. embassy in Ankara. She’s a refreshing change from the world-weary, tough-as-nails, usually alcoholic or otherwise addicted protagonists who populate so much of crime fiction. You, too, are shockingly young (trying not to hate you right now) for someone who’s written such an accomplished novel. So, the inevitable question: How much of you is there in Penny?

Thank you! It meant a lot to me – as a writer, a feminist, and a woman – to make Penny feel at once smart, powerful, and a realistic 21-year-old woman.

Especially when written by men, young thriller heroines – even if not Darkly Troubled™  – can sometimes sprout ludicrously over-the-top bios: “Chrysanthemum (“Chris”), 25, has PhDs from Harvard, Oxford, AND the Sorbonne.  She can shoot guns with her teeth  AND her boobs!”  Etc.

I tried to keep Penny grounded in reality by giving her my own limitations.  If I can’t wrestle ninjas with my bare hands, or speak a dozen languages, or always make good judgments, neither can she. She’s flawed and human, but relies on her mind, her heart, and her integrity.

In terms of cultural authenticity, Penny’s experiences and interactions in Turkey are deeply informed by my own travels in there as a young American woman between the ages of 16-24.

All that said, Penny absolutely isn’t me – she’s herself, and our personal histories are very different. Although I will tell you that when a snarky reviewer called Penny “impossibly plucky,” I did contemplate getting that printed on a t-shirt to wear to book events.

Please tell us a little about the process of writing this book, and especially about the intricate plotting involved. Did you figure out all of the twists first, or go back and add them later?

I wish I were that organized! I wrote the first few chapters in cliffhanger installments for my writing group, who got hooked and asked for more. Then, when I realized I wanted to make it a novel, I had to figure out the rest of the plot. And then came the magic of rewrites.

What’s next? Will it also be set in Turkey, or elsewhere? And please let the word “soon” be part of your answer.

My next book takes Penny deep into the dark political scene of Central Europe.  I was in Budapest for research this winter, where I forced myself to sample as much retes (strudel) as possible.  For literary authenticity, of COURSE.

Finally, any advice for other debut novelists?

Everywhere I live, I put up a postcard with my favorite Calvin Coolidge quote: “Nothing in the world can take the place of persistence.” From the outside, it might look like I lucked out on my first try: I sold my novel to Scribner in a two-book deal at 25! Heaven knows, I’m profoundly thankful for my good fortune with LC. I think we all know the role chance can play in this industry. But it’s worth knowing, I think, that I had been writing seriously for over a decade when LC sold. I spent many (eight?) years on another novel, which I loved, and which got me my agent, but which currently lives on a flash drive. I almost didn’t apply for the writing fellowship that paid for me to live in Scotland and work on LIAR’S CANDLE for a year. So I’d say: keep persisting, and don’t rule yourself out. I think of it as ‘making it possible to be lucky’. Also, as my (brilliant) mother, the writer Rosanne Daryl Thomas, likes to say, “There’s no book but a finished book.”