The Life of an Action Junkie 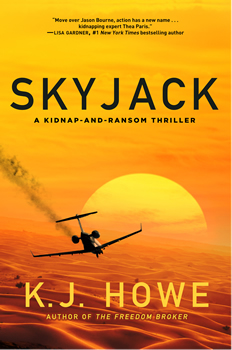 After all, it is these roots that gave her a sense of adventure and turned her into a fearless adrenaline junkie, as comfortable navigating turbulence in a prop plane over the desert as she is managing the day-to-day chaos of running one of the most successful author conferences in the world.

As both the acclaimed writer of the Thea Paris international thriller series, and the Executive Director of Thrillerfest, Howe says her upbringing has a lot to do with how she stays cool under pressure.

“I grew up with two brothers,” she says. “And my father treated me like one of the boys—in a good way.”

Howe often found herself in the co-pilot position of her dad’s latest quest, every outing quietly stoking her passion for anything that would make her pulse thrum. This love of action led her to create the fierce character of Thea Paris, a kidnap and ransom specialist who made her debut in Howe’s The Freedom Broker.

Paris is back in SKYJACK, a heart pumping thrill ride that begins when Paris’ plane is hijacked over the Libyan Desert and the two former child soldiers she was tasked with escorting to safe passage are taken hostage. The plot was inspired by Howe’s own love of flying.

“My father was an aerobatic pilot and he would throw toilet paper out of the plane and try to chop it up into pieces with the propellers,” she says with fondness. “I always wanted to be a pilot, but the lessons and plane rentals are quite costly.”

Instead, Howe lives out this particular fantasy through fiction, in SKYJACK, taking her character on a bumpy ride that tests even Paris’s well-respected nerves of steel. Paris may have the chutzpah to face off against a human adversary, or Bungee jump over a fast-flowing river—but flying, particularly when the plane is under attack, isn’t on her adrenaline bucket list. In fact, she’s terrified.

Howe taps into her character’s fear with the kind of authenticity that resonates throughout every facet of the book. Part of that is thanks to Howe’s fascination with phobias—the idea that fear, or loss of control, can change a person’s reactions. The stakes are high for Paris, who is not only an uncomfortable flier, but also a diabetic—which Howe describes and weaves into the story with needlepoint precision.

This she credits to her background as a former medical writer, and the tremendous amount of research that goes into each of her books.

Two experts in particular helped Howe with aircraft mechanics and logistics for SKYJACK—authors James Hannibal and Bill Scott. As aviation gurus and writers, the men knew exactly how to help Howe get her messaging across. She supplemented their sage wisdom with her own research, including statistics and the study of real life hijacking cases.

“Every time you get in your car, you’re more at risk than being in a plane that is hijacked,” she says. That said, she understands, particularly in today’s political climate, why this fear is at the top of many people’s list of phobias. “You have zero control in the air—you basically just have to surrender your life.”

It makes for a gripping read, but the action in SKYJACK doesn’t stop when the plane lands—in fact, things are just getting started for Paris. In a desperate search for the young hostages, Paris and her team unearth a conspiracy involving the CIA, the Vatican, and the Sicilian Mafia—a trifecta of danger.

Looking down at the mighty Danube River.

What transpires is series of action sequences that, despite their jaw-dropping choreography, maintain the authenticity that is so important to Howe.

“I want the action to be realistic,” she says. “I never want Thea to be a comic book character. She’s strong, but she also has to be a bit of a MacGyver. She has to be able to use her mind, because guns aren’t always going to work. I know it’s still fiction, but I want to continue to stretch myself as a writer and maintain a certain level of believability.”

Not to mention, keep Paris on her toes. Consistent with Howe’s theme of writing page-turning thrillers with heart—the root of which is always family—SKYJACK isn’t all action, though the HAHO skydiving scene will make your stomach flip. With each book in the series, Howe aims to let readers learn a little bit more about Paris, not only through what she reveals directly, but also how she interacts with the various people in each of the books.

To that end, Howe says she plans to introduce new characters, while also bringing back some fan favorites—happy readers are her goal, along with the ability to continue learning her craft.

For inspiration on that end, Howe points to a number of her idols—and now friends—who have gently ushered her toward publication. A long journey that has been paved with Howe’s hard work and determination, and the wisdom of authors like Steve Berry and David Morrell, who taught her to write tight and dig deep.

But perhaps the most important message Howe would like to pass on to aspiring writers is this: find a topic or subject that matters to you.

“Look within yourself, and decide, what do you want to write about?” she says. “If you plan to be in this industry for the long haul—and I do— then you have to fill that journey with intense passion.”

K.J. Howe is the executive director of ThrillerFest and the author of bestseller The Freedom Broker. Immersed in the world of kidnap and ransom for over five years, she created elite kidnap negotiator Thea Paris. Travel and adventure are K.J.’s passions. Home is Toronto, Canada, but she is often missing in action.

To learn more about K.J. Howe, please visit her website.