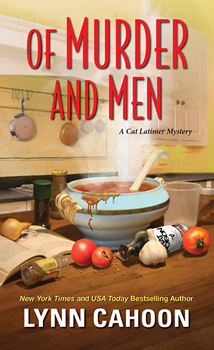 New York Times bestselling author Lynn Cahoon first introduced us to former English professor Cat Latimer in A Story to Kill. Now Cat, who runs a writers’ retreat in the Victorian she inherited from her ex-husband, is back in OF MURDER AND MEN. In this newest installment of Cahoon’s popular cozy series, Cat’s business partner’s wealthy beau is found dead in the horse barn, and it’s up to Cat to manage a group of aspiring authors while trying to catch a killer.

The Big Thrill sat down with Cahoon to talk about her latest novel, the appeal of the cozy genre, and the importance of writing communities.

Congratulations on the recent release of OF MURDER AND MEN. No spoilers, but what can you tell us about your book that we won’t find in the jacket copy or the PR material?

There’s a bit of a power struggle between Cat’s best friend and her first love, with Cat in the middle. And an ex-Alaskan cop may get more than words done during her retreat.

What attracted you to the cozy subgenre?

I was going through breast cancer treatments ten years ago. The one good thing about cancer is you have a lot of time to think or read. I did both, but as I scoured my library shelves, I found I enjoyed mysteries. Not ones with lots of gore or action, but instead, these community-based books where I could visit a new place or bond with new imaginary friends. That’s when I found the cozy genre. I started writing Guidebook to Murder a few years later and fell in love with writing cozies as well as reading them.

I love the premise behind the Cat Latimer mystery series. What was your inspiration for the setting and Cat’s vocation? How important is networking and community involvement for you as an author?

Cat and the gang were developed on a long road trip. My husband doesn’t like to fly, so we were on our way back to Idaho for a family trip. As we drove, I plotted out the pitch I’d send to my publisher (I was unagented at the time). We passed through Colorado, saw an old house I used to love on Warm Springs in Boise, and as soon as I realized Cat was an author of young adult fiction, the dye was cast.  I knew I didn’t want a typical bed and breakfast, and I’d been dying to go on a writers retreat. This way, I get to visit one every time I write a Cat Latimer book.

Networking with other authors is really important to me. I have my close writer friends who I tell everything, and they know I’m a sounding board for them. Then I have my inner circle. These people are vital to keeping up on the changes and current issues in the book business.

I love writing community based stories, mostly because it’s one of my themes and it’s something I’ve thought a lot about as I write. You get to build your family, you don’t have to keep the one you’ve been born into. (Although I adore some of them as well.)

It must take a great deal of patience and creativity to run a successful writers’ retreat—and to solve mysteries at the same time. Please tell us a little about Cat Latimer. What elements from her past have made her the woman she is today?

I don’t think Cat has the patience; I think that’s why she has Shauna as a partner. Cat would rather hide upstairs and write while the guests are in session, but she’s making an effort.  Cat grew up in Aspen Hills, had a high school sweetheart everyone thought she would marry, and went to Covington College just down the street. She got her advanced degree there too, so it wasn’t unexpected for her to marry the older and already established professor, Michael Latimer, after she and Seth broke up. At first their lives were perfect. They purchased a Victorian on Warm Springs Street and went about remodeling as they both taught at Covington. Then, she caught him cheating and she did the one thing she’d never done—she moved away from home. Living in California, she taught and wrote and became the strong woman she is today. She also became friends with Shauna. So when the call came saying she got the Victorian in the will when her husband died, she moved back home and started up the writer’s retreat.  That’s where we find her in book one, A Story to Kill.  OF MURDER AND MEN is the third book, and solves the mystery of what happened to Michael.

What tips do you have for aspiring authors who want to become more involved in the writing community?

I love conferences. It’s a great place to network. But you can go totally overboard and not have time to write, so do what I say (not as I do) and limit your conference attending. Also, get a local writing group.

I know, it’s hard. We’re introverts for the most part, but it’s worth the time you put into it.

I started writing seriously in 2007, the year of cancer. I sold three essays that year. Then I started writing short fiction, and sold several stories to the Confessions market as well as Woman’s World. Then I sold my Bull Rider series to Crimson (2012) and I started to learn how to be an author. I also sold a witchcraft series that year, as well as a small town romance. In 2013, I sold the cozy mystery I’d written to eKensington, a digital line that was taken over by Lyrical Press the next year. Guidebook to Murder, A Tourist Trap mystery, released in April of 2014 and hit the New York Times elist that July.  Since that time, I’ve released nine Tourist Trap mysteries, and three Cat Latimer books with Kensington mass market.

It was a rocky path to my cozy life, but I learned a lot with each step.

I have a lot of favorites—J.D. Robb, Stephen King, Robyn Carr—but what I’m learning as I’m reading is how to keep a large, robust cast happy and understandable to the reader. And that story is the focus.

I’m tied to my desktop mostly. I can write on my laptop when I’m traveling or out at the cabin we own in central Missouri, but I love my office desk. I have a 42 inch screen and it makes writing so much easier when you can see the words.

Next year, I’ll start a new series set in my home state of Idaho called Farm to Fork. Who Moved my Goat Cheese releases in March 2018. We’ll release three of these fun books in 2018, along with at least one Cat book, and a series of holiday novellas for the Tourist Trap series. I have nine contracted projects to write between now and the end of 2018. I like to keep busy. 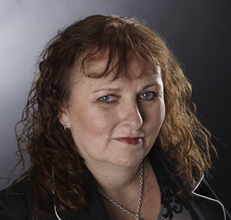 Lynn Cahoon is the author of the New York Times and USA Today bestselling Tourist Trap cozy mystery series. GUIDEBOOK TO MURDER, book 1 of the series, won the Reader’s Crown for Mystery Fiction in 2015. She also pens the Cat Latimer series. A Story to Kill and Fatality in Firelight are available in mass market paperback. She lives in a small town like the ones she loves to write about with her husband and two fur babies.