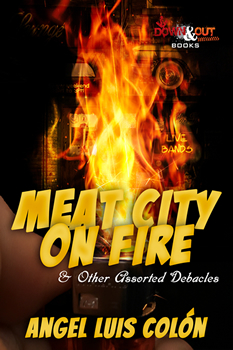 Angel Luis Colón invites you on a short tour of the world as a literary mix tape to that strange Goth girl with the lazy eye who still wants nothing to do with you–no matter how good that fedora looks on your head.

So what’s in store for your brain?

Follow three major moments in the life of gambling addict and mafia muscle Sean Clarke as he goes from soft-hearted kid to full-blown bastard to broken old man.

Thrill at the short-lived and incredibly violent courtship, marriage, and honeymoon of Hank and Annie.

The set of the country’s most popular trash TV talk show is appropriately trashier than what makes the air.

Sometimes you’ll crawl through the fire and smoke for a chance at a semi-decent score and a way out of working in a place called “Meat City.”

All that along with even more violence, revenge, Lee Van Cleef, light sex crimes, and cannibals than you can shake a stick at!

The Big Thrill caught up with Angel Luis Colón to discuss his latest novel, MEAT CITY ON FIRE:

Ultimately, I want readers to have a good time with this collection. The idea was to evoke a bit of a mixtape vibe where anyone can have a favorite story.

I’m hoping MEAT CITY ON FIRE (AND OTHER ASSORTED DEBACLES) stretches what the genre is to some folks. Crime can be penned into a tight box sometimes and I wanted to show that crime was a lot more encompassing than most assume.

This is the culmination of years of work. If anything, I was surprised I wrote this many short stories.

A lot of these stories draw inspiration from the ridiculous amount of hats I’ve worn throughout my life. One story, Help Me Harry, draws quite a lot of its content from my own past.

Since this is a short story collection, let’s call out my favorite short story writers. George Saunders, Clive Barker, Tobias Wolff, Todd Robinson, Travis Richardson, Hilary Davidson – a short list of people that both inspire me and I feel contribute immensely to the short story community. 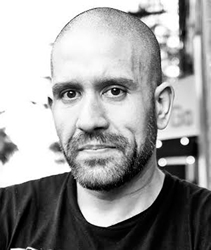 Angel Luis Colón is the Anthony and Derringer Award-nominated author of No Happy Endings, the Blacky Jaguar series of novellas, and the short story anthology MEAT CITY ON FIRE (and Other Assorted Debacles). His fiction has appeared in multiple web and print publications including Thuglit, Literary Orphans, and Great Jones Street. He’s repped by Peter Steinberg at Foundry Literary.

To learn more about Angel, please visit his website.