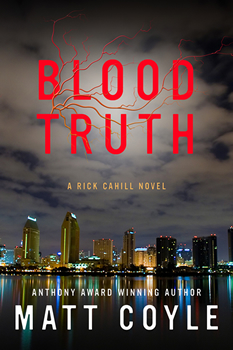 Rick Cahill has long feared the truth of his own blood-the blood of his father coursing though his veins.

When a long-hidden safe unlocks clues about why his father was kicked off the police force twenty-seven years ago and then spiraled into an early drunken death, Rick scratches to find the truth even if it proves the one thing he’s always feared.

But as he grapples with his father’s past, the woman he’ll always love begs him to find out if her husband is having an affair, or is involved in something much more sinister.

Rick may never discover either truth as killers who will do anything to protect their secrets lurk in the shadows.

That sometimes you have to dig deep to find the truth. I hope the readers will enjoy discovering the truth about a long-running mystery in the Rick Cahill series and learning more about how Rick became Rick.

I don’t know if it does. I just hope people like it. I do hope, in some small way, it advances the character-driven side of the genre. I don’t really think about such grand ideas. To paraphrase Robert Crais, I just make stuff up.

I learned to have blind trust in my writing process. To keep laying tracks in the first draft even when they appear to be going nowhere and have faith that I can find the true path of the book on revision.

I was surprised how important the character Moira became to Rick, me, and the book. She was introduced in my second book, Night Tremors, as a secondary character and plays an even smaller role in my third book, Dark Fissures. I knew she’d have a bigger role in BLOOD TRUTH, but had no idea that hers and Rick’s friendship would become so important and that she would be the conscience of the book. A happy surprise.

This is by far the most personal book I’ve written. I lost my father shortly before I started writing it. BLOOD TRUTH was always meant to be a bit of a father/son story, but that theme took on much greater significance when I began the actual writing. The book was a difficult, but very rewarding write at the same time.

Raymond Chandler, Ross MacDonald, and Ernest Hemingway were very early influences before I even started writing. The Sun Also Rises had a big influence as it showed me how much impact so few words could have.

Contemporary authors who have influenced me are Robert Crais, T. Jefferson Parker and Michael Connelly. Silent Joe showed me that crime novels could be about so much more than crime. Crais shows the importance of voice and Connelly never fails to draw the reader in immediately in, seemingly, effortless fashion. 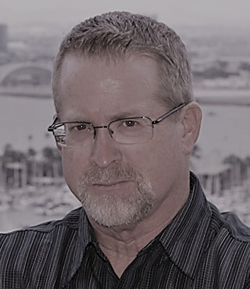 Matt Coyle knew he wanted to be a crime writer when he was fourteen and his father gave him The Simple Art of Murder by Raymond Chandler. His debut novel, Yesterday’s Echo, won the Anthony Award for Best First Novel, the San Diego Book Award for Best Mystery, the Ben Franklin Award for Best New Voice in Fiction. Night Tremors was a Bookreporter.com Reviewers’ Favorite Book of 2015 and was an Anthony, Shamus, and Lefty Award finalist. Dark Fissures, the third book in the Rick Cahill crime series, was a finalist for the Macavity and Lefty awards and was a 2016 Top Pick for Bookreporter.com. BLOOD TRUTH is Matt’s fourth novel. Matt is a graduate of UC Santa Barbara and lives in San Diego with his yellow Lab, Angus, where he is writing the fifth Rick Cahill crime novel.