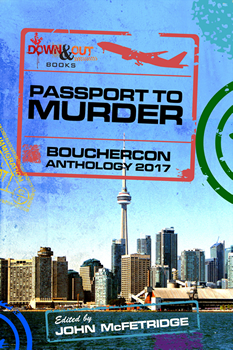 PASSPORT TO MURDER is published in conjunction with Bouchercon, the World Mystery Convention, held in 2017 in Toronto, Ontario. As with the convention itself, the anthology spreads a broad canopy across a wide variety of crime writers from across the country and around the world—including both veteran writers and the brightest up-and-coming talents in the field. All of the stories include some kind of travel, ranging from a cross-America ride-sharing trip to tourists in Italy and Japan, to a woman on the run in Mexico, to murder in Cuba. And even a haunted hotel in Toronto.

All participants contributed their efforts to support our charity—Frontier College, winner of the UNESCO Literacy Prize in 1977—and by extension readers and writers everywhere.

ALL PROFITS GO TO FRONTIER COLLEGE.

John McFetridge is the author of four novels in the Toronto series, and the Eddie Dougherty trilogy set in Montreal in the 1970s. He is also the co-editor, with Kevin J. Anderson, of the anthology, 2113; stories inspired by the music of Rush, and co-editor with Jacques Filippi of the anthology Montreal Noir.