When the Wrong Side Has Power 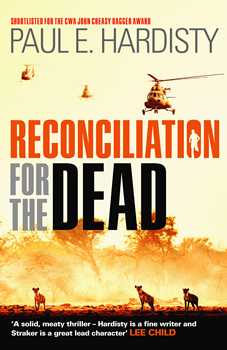 A Canadian by birth and now the CEO of the Australian Institute of Marine Science based in Queensland, Paul Hardisty has spent 25 years working all over the world as an engineer, hydrologist, and environmental scientist.  He has rough-necked on oil rigs in Texas, explored for gold in the Arctic, and rehabilitated village water wells in the wilds of Africa. He survived a bomb blast in a café in Sana’a in 1993, and was one of the last Westerners out of Yemen before the outbreak of the 1994 civil war.

Yemen was the setting for Hardisty’s powerful debut thriller, The Abrupt Physics of Dying, which was short-listed for the Crime Writers Association Creasy New Blood Dagger award—the premiere British award for first novels in the mystery/thriller genre. It was followed by The Evolution of Fear last year.

Paul’s protagonist, Claymore Straker, is a South African who went through the mill of the Angola war and was badly chewed up in it. In RECONCILIATION FOR THE DEAD we find out what really happened to him then and why. It’s Clay’s backstory.

How much of that story have you always known, and how much have you developed in the writing of this book?

I have been thinking about and working on the plot and character elements of this series for the last 15 years. Clay’s experiences as a young man growing up in South Africa during apartheid were always going to be the essential backstory for the books, and I had a number of pretty specific events from his past fixed quite early. These appear as fragments of flashbacks and recollections in the first two books, which are set 13-plus years later, after Clay has been dishonorably discharged and exiled from SA.

Meeting of the Truth and Reconciliation Commission.

In the third book, RECONCILIATION FOR THE DEAD, Clay goes back to South Africa to testify to Desmond Tutu’s Truth and Reconciliation Commission (TRC), seeking amnesty for the terrible things he did during the war. His testimony provides the vehicle for us to go back to 1981, and explore Clay’s past in detail.  It explains why Clay is the distant, emotionally closed, damaged man we meet first in The Abrupt Physics of Dying. The progression has been a natural one, I think, and has built suspense. So when you finally find out just what happened back then that was so bad, I hope it pretty much blows you away.

Much of the book takes place when he is 21, fighting in the undeclared war in Angola on the side of the South African army. The theme of the book is largely his personal disillusionment with the defense of white South Africa as he learns about the abhorrent things that it’s doing. Yet he finds himself unable to join the other side, whatever his sympathies. Is this unresolved internal tension at the heart of the character we see in the books that are set later?

Absolutely. The man we meet in the first two books is simply unable to forgive himself for what he has done. It forces him, eventually, back to testify to the TRC, in an attempt to win amnesty, but mostly to find some kind of absolution. Throughout this, Rania, the other main character, is trying to help him understand that forgiveness is possible, and that most importantly, he must learn to forgive himself. 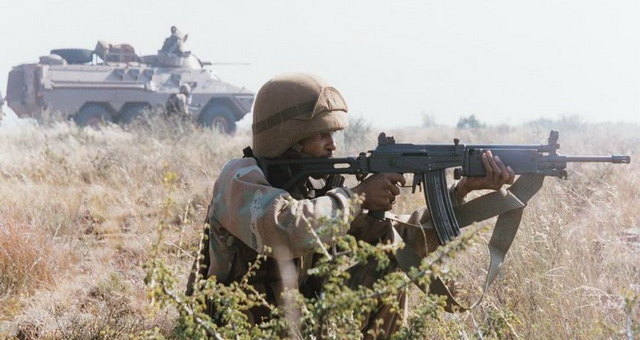 Most of the book takes place in South Africa and Angola. How did you develop the background knowledge to set a book in two countries you don’t know well?

Actually, I have worked extensively across Africa over the last 30 years. I was married in West Africa in the 1980s, was in Ethiopia in the early ’90s as the Mengistu regime fell, and have traveled extensively across Southern Africa. So I know some of the continent pretty well, and obviously, tried to set as many of the scenes as I could in places I know. I have supplemented that with extensive research on the period (1980-82), and mention a couple of key sources in the back of the book. I also consulted with friends who were there at the time.

The story is based on the true case of “Dr. Death” and testimony given to the TRC. How much of this awful story is fact, how much conjecture, and how much to make the story work?

The core issue of apartheid South Africa’s secret chemical and biological weapons program is true. Dr. Death is a real person. Some of the atrocities described in the book, and which Clay is witness to, and unwitting participant in, happened.  The rest of the characters are fictional.  But as with all my books, I try to root the action within real places, timelines, and events.  Some are a matter of historical and public record, and others, such as the confrontation between the oil company and the villagers in Yemen in The Abrupt Physics of Dying, were things that I witnessed, and have never been revealed to the public. 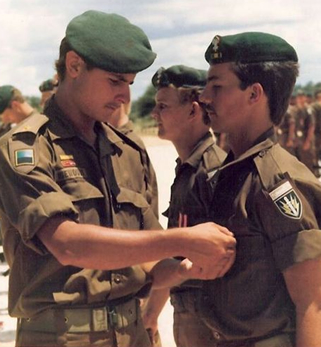 Medals for the survivors of the Angolan war.

Another theme in the book is betrayal. Clay is betrayed both by people and institutions. Was this inevitable for someone trapped between two sides?

I am fascinated by the idea of legal crime.  What Clay confronts, in all of the books of the series, are actions that are clearly wrong, but are sanctioned or encouraged by the powers of the day. Fear is the instrument these powers use to control us, and prevent us from action (hence the title of the second book: The Evolution of Fear). Clay overcomes his fears—partly driven by all the wrong he has seen and done—and acts. As he does, it is inevitable that some of those people, who may have seemed to support him, turn on him. An element of all the books is that Clay never knows who to trust, and the ground is constantly shifting around him. I strive for realism and immediacy, above all. Betrayal is, unfortunately, all too human a trait. 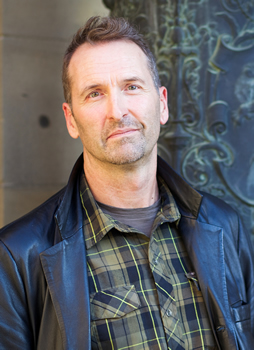 The one person Clay can trust is Eben. They are comrades in arms and share the same world view. Was it necessary to have a partner for him like this to keep him (somewhat) sane?

Eben represents one pole fighting for Clay’s soul.  Eben represents our higher selves, our ethical selves, the good we are capable of. And he challenges Clay to find those same things within himself. Crowbar is the other pole. He teaches Clay to kill, to do whatever it takes to survive, to connect with his ancient, animal self. Clay is constantly pulled in these two opposing directions, and both shape him and his destiny.

I know you are currently on a trip to Egypt. Is Egypt in Clay’s future?

I just finished a long trip through Egypt, from Cairo through the Western Desert and down the Nile to the Sudanese border. Over the years I have worked extensively in the country, but wanted to go back specifically to research the fourth and possibly final book of the series.  I am working on finishing up the first draft of The Debased and the Faithful right now.  It is set largely in Egypt, and follows on immediately after Clay quits South Africa after testifying to the TRC.

I’m looking forward to it!