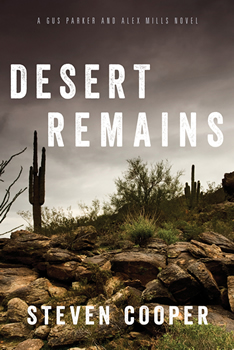 Someone is filling the desert caves around Phoenix with bodies–a madman who, in a taunting ritual, is leaving behind a record of his crimes etched into the stone. With no leads and no suspects, Detective Alex Mills sees a case spinning out of control. City leaders want the case solved yesterday, and another detective wants to elbow Mills out of the way. As the body count rises, Mills turns to Gus Parker, an “intuitive medium” whose murky visions sometimes point to real clues. It’s an unorthodox approach, but Mills is desperate.

When Parker is brought to the crime scenes, he sees visions of a house on fire and a screaming child. But what does it mean? He struggles to interpret his psychic messages, knowing that the killer is one step ahead and that in this vast desert, the next murder could happen anywhere. Nor does it help that he’s always been unlucky in love and now finds himself the prey of a lovelorn stalker. She is throwing him off his game.

Someone will win this contest, and both Parker and Mills fear it will be the cunning, ruthless killer, who is able to use the trackless landscape as a cover for his brutal crimes.

I hope readers will enjoy how Gus and Alex, somewhat unconventionally, approach the task of tracking a killer. I also hope they’ll be intrigued by one character who speaks no words at all: the enchanting and mysterious Arizona desert. It can hide secrets, reveal clues, and inspire both beauty and horror. I’d like readers to leave the book feeling they’ve experienced the atmosphere along with the plot. Perhaps some who have never seen the rugged landscapes of the Desert Southwest might be intrigued enough to come explore.

The novel presents two protagonists, a homicide detective and a psychic, both of whom rely on varying doses of intuition and genuine clues. While the psychic’s revelations do conjure the supernatural, the result is not magic. Nor is the cop’s methodology flawless. Both men stumble hard. Their struggles, both personal and professional, challenge some stereotypes.

For years, the ancient rock art of the desert fascinated me. I’d hike to various sites just to study the petroglyphs and try to infer their meanings. It wasn’t until I wrote DESERT REMAINS that I truly researched these iconic images. My findings surprised me. But I won’t give them away here. I also discovered that psychics have varying levels of skills and abilities, that no two psychics necessarily work the same way, and that some of the stuff they do is mind-blowing.

My years as a reporter, particularly the years covering murder trials gavel to gavel, have certainly informed my writing. I had a front row seat to the best and the worst of the human condition.

As a Boston boy, I grew up reading Robert B. Parker novels. I was hooked. I grew to love stories with rich locales. From Parker, I eventually graduated to Dennis Lehane, whose Boston seems darker and grittier. C.J. Box builds great tension against absorbing if not cinematic backdrops. I very much enjoy the storytelling of Carl Hiaasen because he casts an entire state in a dramedy of human error, but his love for Florida is as palpable as his disdain. His plots are wickedly clever. From an earlier period, Hammett and Chandler. And John le Carre! 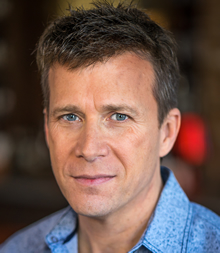 Steven Cooper is a freelance writer, video producer, and the author of three previous novels. A former television reporter, he has received multiple Emmy awards and nominations, a National Edward R. Murrow Award, and Associated Press awards. He taught writing at Rollins College (Winter Park, FL) from 2007 to 2012.