Writing a Game Changer Together 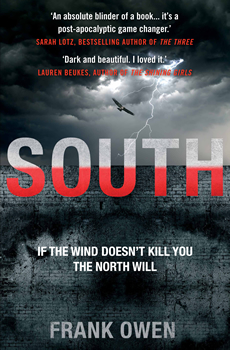 Frank Owen is the writing partnership of Diane Awerbuck and Alex Latimer, both South African authors well-known for their work in other genres. Diane has won the Commonwealth Writers Prize (Africa and the Caribbean) for her novel Gardening at Night and is a teacher, reviewer, and poet. Alex wrote The Space Race for adults, and also writes and illustrates children’s books. An unlikely combination to write a dystopian and totally scary alternative history thriller set in the United States? Don’t judge until you’ve read SOUTH. Lauren Beukes and Sarah Lotz loved it—Lotz called it a “post-apocalyptic game changer.”

This is a U.S. where the civil war didn’t happen until much later, when unification of the North and the South became more a matter of political ambition than of policy. By the time the war does happen, it has many modern warfare horrors available and spirals into germ warfare. The North uses the wind and multiple mutated viruses to destroy the South, and also builds a wall across the continent to enforce the separation. The world that Diane and Alex build on this foundation is as real and bitter as McCarthy’s The Road.

You both come from rather different backgrounds. How did you come to write together, and what motivated this unusual premise for a novel set in the U.S.?

AL: When I was releasing my first novel, The Space Race, I’d just finished reading Diane’s heavy-hitting but wonderful book, Home Remedies, and so as a fan, I asked her to interview me at the launch. With some bribery, she agreed. We do come from different backgrounds, but we realized early on that our interests are quite similar. The idea to write together was just for fun, initially, because it’s difficult to know how that process works without getting into it.

The premise for SOUTH came from chatting over coffee during a particularly cold and windy Cape Town winter. Everyone was sick and had been for what seemed like months. The idea of wind-borne viruses was literally in the air. But at the same time, I think the premise of building walls and keeping people apart was also floating about in the global zeitgeist. We built our wall across America three years before Trump used it in his election campaign. Fiction has a hard time keeping up with reality.

As one-half of a writing couple myself, I’m naturally intrigued to know how you actually write together—by chapter, character, draft? And is there any significance behind the name Frank Owen?

DA: Frank is a name from a side of my family, and Owen came from Alex’s. So the ancestors are doing their bit there.

AL: I don’t really think of our collaboration as two writers writing the same story. Diane’s writing style and my writing style are quite different—so the process was more about combining my skills with hers rather than sharing the load. I’ve always been intrigued by pace and plot, whereas Diane’s writing is much more lyrical. We tried a few ways of working, but in the end we’d just chat about where the story was going and then I’d put down the first draft of a chapter and Diane would double it, concentrating on character and atmosphere. We wanted a fast-paced action narrative told in a “literary” style.

Your lead characters Dyce and his brother are heading for the sea on the run from a powerful family, while Vida is trying to save her mother and her mother’s knowledge of natural remedies. They have different agendas, but join forces from necessity, despite the ongoing tension between them. Is it an axiom that this type of thriller needs to be more character driven than plot driven?

DA: Most of us readers are interested in characters as people. I definitely read novels because I hope to find answers to all sorts of dilemmas. Complex, believable characters are a way to talk about serious issues without tub-thumping.

AL: We were quite conscious about spending time doing both character and plot. My default would be plot first— but then who cares what happens in a novel if they don’t care about who it’s happening to? It’s a tricky balance. 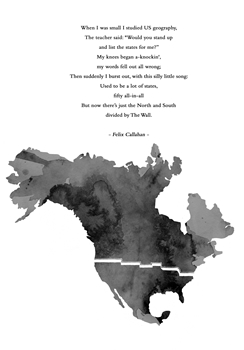 SOUTH is a dark vision. People are automatically suspicious of any stranger who may be the carrier of a new and usually fatal disease. There is little cooperation with the exceptions of one community which protects itself and generally excludes strangers, and a hospice-type community where everyone is already sick. Yet many of your characters—including Dyce and Vida—are trying to help and support others. Would you call yourselves optimists about human nature, and was exploring the behavior of intrinsically good people in intolerable circumstances part of your theme?

AL: I’m certainly an optimist about human nature. Why can’t we all just get along? For me apocalyptic fiction is all about whittling away the parts of life that are non-essential. There’s no dry-cleaning to be done, no dog food to buy, no peeling fascia boards that need attention. You get right into the essence of a person. But as dark as that sounds, we realized early on that every single character in the book had to be hopeful in some way—because without that hope they’d already be dead. It’s a lovely space to explore human nature and the will to survive.

DA: It’s something that fascinates me, and the only answer I’ve found is Viktor Frankl’s, in Man’s Search for Meaning. What makes one person give up, and another keep fighting? Even medical doctors call it the will to live: they don’t know exactly what it is, either—but we all know it when we see it.

The forcibly divided country you envisage in the novel is somewhat reminiscent of apartheid South Africa before the democratic elections. Was this a deliberate part of the construction of SOUTH?

AL: It was deliberate and unavoidable. As South African authors there’s really no getting away from the things that have shaped us. We were quite torn about setting this book in the U.S.: on one hand, we obviously wanted a wider readership and an American setting provides that. But we also liked the idea of exploring the relatively familiar themes of Apartheid through foreign eyes. What does a divided society look like when you lay it over the familiar American landscape? And can that provide new insights into segregation, generally?

DA: We’re writing what we know, of course. But America has its own fine history of officially legislated and socially present prejudice, and we’re seeing that recidivism happening again because it’s condoned by people in power. 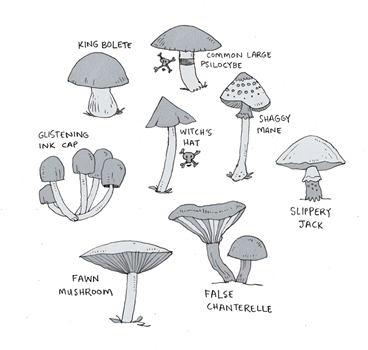 A lot of research went into making SOUTH coherent and believable. It needed to cover geography, viruses, mushrooms, climate. How did you handle this aspect?

AL: Geographically, we relied on Google Earth and Google Street View. To be able to click on an open stretch of forgotten highway and be transported right there was valuable— and something you can’t get from books. You get these strange atmospheric details, like how far the fences are from the road, what sort of architecture you’d see, how dense the foliage is, what sort of trees there are, what color the dirt is, the power lines and streetlights, what color the road markings are.

We also did extensive research into the kinds of plants and trees you’d find in specific areas of Colorado—so that as the characters move through the landscape, the landscape changes with them in a realistic way.

But I feel that the foundation of all of the research was this very strong sense that America is a genre of its own. The whole world has been culturally colonized by the US. We’ve all grown up with prairie landscapes, Coke ads, The A-Team, Mount Rushmore, Clint Eastwood. It’s often the case that we know more about America than we know about our own country. So we’re not starting from zero when we set a book in the U.S. The research we do is a fleshing-out of that innate knowledge of America.

DA: We also have tame American beta-readers to catch any egregious errors, and so far we have been absolutely spot-on. But the thing is the feeling, after all. Readers will forgive a minor detail if it’s happening in a coherent and cohesive internal universe.

Could you tell us about the music you commissioned for the book?

DA: One of the ways people escape the present or hold on to the past or imagine the future is through music, and we were listening to a lot of lonesome cowboy songs when we were writing. It took me back to the South African stuff from the eighties and nineties—Afrikaner protest music, Die Gereformeerde Blues Band and Valiant Swart—that hardcore, quite literary but also folky music with its direct bloodline going back to the Dutch guys writing a hundred years before that, and the beautiful melancholy that went with it. And then we thought: We know musicians! So we ended up commissioning some of that dirty cowboy vibe from the vastly talented Gene Kierman. Two songs are on our website-southvsnorth.com, but he’s also the front man for Miss Texas 1977.

Despite the wall, it seems there’s an escape to the North. Or is there? Is NORTH in our future?

AL: We always saw this story as exploring both sides of the wall. I think there’s wonderful intrigue built into SOUTH, where everything they know about the North is rumor. Everyone hates the North so much, but there’s also a sense of it being a kind of futuristic heaven—and that’s difficult to hate. A huge part of these books, for me, was the ending. We had the ending for NORTH right from the very start—right from when we were beginning to plot SOUTH. So of course we had to write it. NORTH will be released in 2018.

DA: Keep an eye on the website—and do listen to the absolutely brilliant original music we commissioned from Gene Kierman.