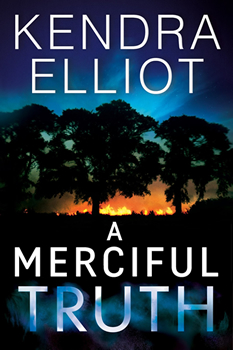 Raised by a family of survivalists, FBI agent Mercy Kilpatrick can take on any challenge—even the hostile reception to her homecoming. But she’s not the only one causing chaos in the rural community of Eagle’s Nest, Oregon. At first believed to be teenage pranks, a series of fires takes a deadly turn with the murder of two sheriff’s deputies. Now, along with Police Chief Truman Daly, Mercy is on the hunt for an arsonist turned killer.

Still shunned by her family and members of the community, Mercy must keep her ear close to the ground to pick up any leads. And it’s not long before she hears rumors of the area’s growing antigovernment militia movement. If the arsonist is among their ranks, Mercy is determined to smoke the culprit out. But when her investigation uncovers a shocking secret, will this hunt for a madman turn into her own trial by fire?

Award-winning author Kendra Elliot took time out of her busy schedule to discuss her latest release, A MERCIFUL TRUTH, with The Big Thrill:

I like to learn something when I read stories. I spent a lot of time reading about prepping, militias, and survivalists. I try to sprinkle that knowledge into the story without the story looking like, “Hey, see what I researched?” in info dumps. I want the reader to be immersed in a world different than their own and walk away having loved the experience.

What sold my editor and publisher on this series was the clash between the background of the main character and her current profession. For someone raised to distrust the government and prepare for a world without power or laws, the fact that Mercy is an FBI agent creates some wonderful conflicts inside of her and with the people around her. She is constantly torn between two worlds.

Every book is a surprise to me; I’m not a plotter. When I start a book, I know my characters and the opening scene. That’s it. On a personal level, I surprised myself when I powered through the final ten percent of the story after one of my children became ill. I asked for a two-week extension, and then I spent the next four months focused on her. When your child is deathly ill, there is no brain power or energy for anything else. I have no memory of writing the end of the book, but somehow I did.

I love writing small towns. Everyone knows each other’s business. In A MERCIFUL TRUTH, the past haunts several aspects of Mercy’s life. She struggles with outright rejection from members of her family, she tries help her community while respecting their beliefs, and figures out how to handle becoming an instant mother to a teenager.

I decided to write a book after reading one of Diana Gabaldon’s books for the umpteenth time. I set the book down, and I felt extremely satisfied and happily looking forward to the next. THAT was the feeling I wanted to re-create for the reader in my books. It wasn’t so much about the story; it was the reader experience that called to me. My writing has been influenced by Allison Brennan, Lee Child, Robert Crais, Linda Castillo, Michael Connelly, and Karin Slaughter, and too many others to list. Each one teaches me something different. Sometimes it’s their use of language, sometimes it’s the character development, and sometimes it’s the plot. 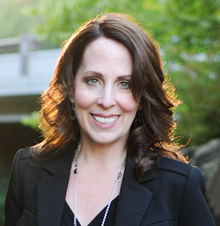 Kendra Elliot is the award-winning author of numerous books, including the Bone Secrets and Callahan & McLane series. Kendra won the 2015 and 2014 Daphne du Maurier awards for Best Romantic Suspense, and she was an International Thriller Writers finalist for Best Paperback Original and a Romantic Times finalist for Best Romantic Suspense. She has always been a voracious reader, cutting her teeth on classic female heroines such as Nancy Drew, Trixie Belden, and Laura Ingalls. She was born, raised, and still lives in the rainy Pacific Northwest with her husband and three daughters but looks forward to the day she can live in flip-flops.