An Out of the Box Spy Hero 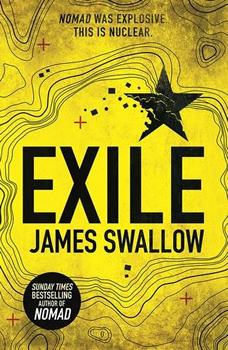 Most spy heroes can be slotted into one of three “J” archetypes—the suave and smooth James Bond, the cool and calculated Jason Bourne, or the tough and often unhinged Jack Bauer. The protagonist in James Swallow’s EXILE—the explosive follow-up to his internationally bestselling novel, Nomad—is something else entirely.

“I wanted to create a spy hero that was none of the above,” he says via Skype from his U.K. home office. “The kind of guy that is called into the front line whether he likes it or not. That became Marc Dane.”

Make no mistake about it—Dane’s inability to be categorized doesn’t detract from his skills on the job, nor does it slow down the plot in what Swallow admits is a novel that is unabashedly commercial, heavy on the action, and geared for maximum entertainment.

“This is very much me trying to create a character that resonates with readers,” he says. “I want to keep writing about him for as long as I can. I don’t let myself get bogged down in anything that detracts from the job. I do the work—and let the work do the work.”

And Swallow isn’t afraid to do the work, as a quick peek through his staggering list of publishing credits can attest. In addition to his original works—including a series of young adult novels—Swallow has written for radio and video games, as well as penned numerous scripts and TV tie-in books for iconic shows such as Star Trek, Dr. Who, and 24. 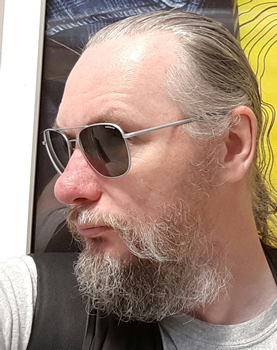 “It’s not hack work,” he says, admitting that people often don’t understand the effort that goes into writing about characters that have been created by someone else. “It’s like being given a set of toys—you can play with them, but you can’t break them. For me, it’s about figuring out how to unwrap them in an interesting way. It’s a lot of fun.”

Still, after 10-15 years of playing with someone else’s toys, Swallow is keen to dabble in the world of thriller with a fresh, original character. “It’s almost like starting my career from scratch again,” he says. “Writers are always their own worst critics, and for this series, I certainly am.”

But for all his insecurities, Swallow delivers a pulse pounding read. EXILE once again places Marc Dane in the throes of danger as he faces off against a vicious Serbian gang whose profits come from fake nuclear weapons, a disgraced Russian general, a vengeful Somali warlord, and a jaded government agency.

The story moves at breakneck pace from uncharted CIA prisons to the skyscrapers of Dubai, the oil rigs off the African coast, and the ancient caverns beneath the city of Naples. And while modern technology is at the pillar of it all, EXILE harkens back to the spy novels of the 70s and 80s—aka: the airport thrillers.

“I was looking for the same vibe as a Robert Ludlum, for instance, but with a modern coating,” Swallow says. A risky proposition, he admits, as this type of novel isn’t necessarily the book du jour. “But I don’t have any problem with writing a pulp thriller. I’m not trying to be some high phi luting literary genius.”

And yet, that part comes almost organically, a result of Swallow’s clear dedication to his craft, and his many years served in the writing trenches, carving out a niche for himself as not only a “go to” guy on work-for-hire projects, but also a worthy adversary among the genre giants. His work ethic rivals his acute attention to detail and passion for prose. 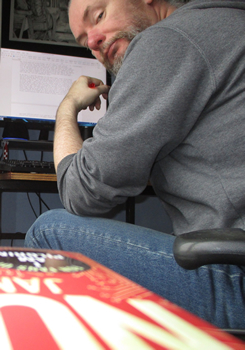 Swallow is currently at work on his third book featuring Marc Dane, an accidentally ripped-from-the-headlines story about a significant computer hacking scandal. “Of course, that’s huge in the news right now,” he says. “But by the time the novel comes out next year, this will all be old hat.”

Which poses a bit of a challenge, since Swallow says it’s important that his books retain their contemporary feel. For this, he aims to set each book in the year it is published, sandwiching real world details between high-octane drama and rich character development. Ghost is slated for release in the U.K. in 2018—which is, unfortunately, how long North American audiences will have to wait to get their hands on the first two books in the series, NOMAD and EXILE.

In the meantime, if another TV tie-in or unique writing opportunity presents itself, Swallow says he wouldn’t necessarily turn a blind eye—especially if given the chance to work on something in which he’s already a fan.

“I’m just happy to be writing,” he says. “To be the master of my own destiny, that’s just terrific. It doesn’t get any cooler than that.”