The Secrets to Making It Legal 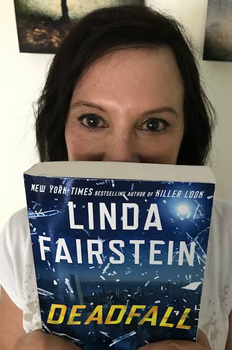 By John B. Valeri

Recently, Fairstein and Clark spoke about how they use fact to ground their fiction …

Linda Fairstein (L.F.): Prosecutors have enormous power, and with that comes the responsibility of “doing justice,” which may be a different process in every kind of case one encounters. My instructions from the District Attorney, from my earliest days, were to “do the right thing,” and of course, to follow the rule of law. Discretion plays a very large role in decisions that big-city prosecutors have to make every day (smaller jurisdictions, too–but the volume in NY and LA is staggering), and it is so important to be able to apply wisdom, experience, and fair treatment to the black and white letter of the law.

Marcia Clark (M.C.): A defense attorney owes his client complete loyalty and confidentiality with one or two very limited exceptions. The attorney must seek out the information that will help her client’s case, point out the weaknesses in the prosecution’s case, present the best defense possible and get the best possible deal for the client. A defense lawyer has no obligation whatsoever to seek out the truth—unless, of course, that helps the client. Which sometimes (though rarely), does. 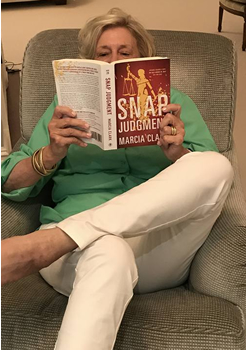 MAINTAINING THE INTEGRITY OF CHARACTER

L.F.: I think writers who have or have had the “real job” have to be very careful about the integrity of the protagonist, if she or he has that job–prosecutor, judge, detective. I wrote the first five books in the series while I was still in the DA’s Office, and I was keenly aware that readers–and adversaries–would be looking for anything out of line. My readers notice that I take more liberties with Alex Cooper in her language and actions since I stepped down, but she’s not a lawbreaker.

M.C.: Sam is a very, let’s say … unique lawyer. Her boundaries are set pretty far out, way beyond what anyone—let alone any normal defense attorney—would deem acceptable. And I explain the origins of Sam’s somewhat twisted world view in every book. Her personal demons drive her to do things that would be way beyond the pale for anyone else. So although she generally does what she’s supposed to do as a defense lawyer, her issues afford me the latitude to push her down a road much less traveled.

L.F.: A compelling narrative and great pacing are critical in suspense novels and thrillers. I’m a huge fan of procedurals—that’s what I set out to write—and some procedural tactics are quite exciting, so that’s not a problem. On the other hand, when you get to the necessary tactics that are quite dull, then most writers learn to stay with the “truths” of the process but trim the scenes or explain quickly and jump forward. It’s so important to keep that narrative racing ahead, and bring the reader along with you.

M.C.: The biggest cheat is generally the amount of time things take. On the page, I simply refer to the passage of a few weeks and for the reader, it’s just a line or two, so no immediacy is lost … I generally think that it makes for a much better experience for the reader if I make the procedure as accurate as possible, so I try not to compromise there unless absolutely necessary. And even then, when I do step outside the lines, I generally admit that I’m doing that and explain why.

L.F.: I set out to do this series because I wanted to add the authenticity of what a special victims prosecutor does to this crowded genre, so getting it right was critically important to me. These books have to be entertaining in order for fans to enjoy them and come back to your characters, so there is always an effort I’m aware of to balance realism with the caper-like adventure, and also to make sure the effect of these crimes on the victim is a part of the story.  In the last three novels, Coop has experienced some of that herself.

M.C.: Do I push the envelope to the outer reaches of the possible for the sake of entertainment? Of course! That’s the fun of it. Sam is a pretty pulled out character and she does some outrageous things. Are they likely— i.e., would anyone else do what she does? No, of course not. But could she do those things? Sure! The whole point of a character like Sam is wish fulfillment. She does what we (or maybe just me? Gulp!) wish we could do—or wish someone would do.

L.F.: Capturing the tension of office politics and jurisdictional turf wars is part of the daily atmosphere. It may not happen everywhere—and it may not be “current,” because all of this drama between the DA and the Feds existed in my former job more than 20 years ago. I follow criminal justice issues quite carefully, and I’m always stunned by the not-so-subtle battles between local and federal law enforcement agencies. There’s lots of creative license to throw in the pot here, as I did in DEADFALL. Those Feds try to make Alex Cooper a suspect in a murder case!

M.C.: I usually say you don’t have to follow the adage, “Write what you know.” But in this respect I think you have to know what you’re talking about; whether you achieve that by talking to people who’ve lived though it or you’ve lived through it yourself. Although there are broad similarities between the kind of politics that go on in a police department or DA’s office or insurance company or Hollywood studio, there are always aspects that are distinctive to each workplace and it’s important to make sure those unique twists are accurately depicted. Specificity with regard to the way people interact in a particular world is critical.

Linda Fairstein began her career as a prosecutor in 1972 and was appointed to lead Manhattan’s Sex Crimes Prosecution Unit four years later. She supervised every case of sexual assault and domestic violence, as well as homicides related to those crimes during her twenty-five year tenure. These included the high profile prosecutions of Marvin Teicher (a dentist who molested patients after sedating them), Russell West (the “midtown rapist”), and Robert Chambers (the “preppy murder” case). Fairstein’s first book, Sexual Violence: Our War Against Rape (1993), documents the history of legislative reform in the field and was named a New York Times “Notable Book of the Year.” Her first novel, Final Jeopardy, was published in 1996; four more would follow before she left the DA’s office in 2002 to write full-time. Fairstein’s nineteenth entry in the internationally bestselling Alex Cooper series, Deadfall (Dutton), is just out.

Marcia Clark began her career as a defense attorney before joining the Los Angeles District Attorney’s Office in 1981. She handled many high profile cases, including the prosecutions of Robert Bardo, convicted of killing actress Rebecca Schaeffer, and O.J. Simpson, in her fourteen-year stint. Like Fairstein, Clark made her debut in non-fiction with 1997’s #1 New York Times bestseller Without a Doubt, which chronicled her work on the Simpson case. Her first novel, Guilt by Association (2011), introduced prosecutor Rachel Knight; three more books followed in that series. Last year, Clark originated a new leading lady, defense attorney/vigilante Samantha Brinkman, in Blood Defense (Thomas & Mercer) and its follow-up, Moral Defense. The third book in that series, Snap Judgment, is due out on August 29th.

John B. Valeri is a Connecticut-based reader, writer, and reviewer. He currently contributes to Criminal Element, Mystery Scene Magazine, The National Book Review, The News and Times, The Strand, and Suspense Magazine. His short stories “Just Cause” and “Blood Relations” appear in the award-winning anthology, Tricks and Treats: A Collection of Spooky Stories by Connecticut Authors, published by Books & Boos Press.