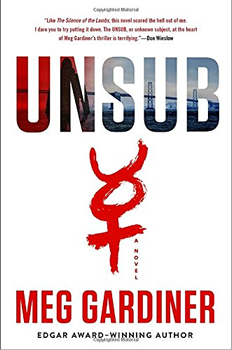 Meg Gardiner used to be a lawyer. Then she taught college students. Along the way she even managed to be a three-time champion on Jeopardy! But she knew what her real goal was.

“I wanted to be a writer,” says Gardiner, whose new thriller, UNSUB, has gotten extraordinary acclaim and already been bought by CBS for a TV series. “I always wrote, whether it was for a class or the high school newspaper. I published my first short story when I was in college. When I was teaching, I wrote short magazines pieces. And I always had in the back of my mind that I would write a novel.”

UNSUB, her 13th book, introduces a new series character in Caitlin Hendrix —a young police officer on the trail of a legendary serial killer called the Prophet in San Francisco who, 20 years earlier, had ruined  her own father’s career as a homicide detective. Now the Prophet has begun killing again and leaving taunting clues for police.

Asked how she would describe it to readers, Gardiner says: “High octane, emotionally satisfying, intriguing—I hope they’ll bite their nails down to the quick but never stop turning the pages.”

“I wanted to write about a cop. So Caitlin is young, green, driven—she’s a brand new detective not even in homicide when this case crashes down on her. She’s horrified that this killer the Prophet has returned after 20 years. She wants to do anything she can to bring him to justice because her father couldn’t. She saw how the case destroyed him and feels on some level a need to put that right.”

“I was a kid….I couldn’t understand what it was about but it was very scary,” she recalls ‘Vicious ruthless, sadistic rage on these totally innocent young people and a lust for publicity. Nobody ever really understood whether the Zodiac had some overreaching goal beyond terror and violence. That’s part of the mystery—if we could just figure out what his goal is.”

So why are readers and TV/movie viewers so fascinated by serial killers?

“These people are out there and they could be a threat to any of us. And I think it makes us feel if maybe we could understand them, we could protect ourselves. If we could only figure out why the chainsaw murderer is doing what he’s doing, we’ll be the one to survive the attack. We seem to be endlessly perplexed, frightened and fascinated by serial killers.”

She enjoys writing her thrillers with strong female protagonists.

“Nobody wants to read about—and I don’t want to write about—someone who just curls up in a ball sucking her thumb if they’re challenged. If you’re going to write a thriller, you need to write about someone who accepts a challenge and we hope rises to the occasion. I enjoy writing women from the inside out. I also love writing about men who are their partners in work or personal lives. I make sure I have a guy read the book so I know the guys sound real.”

Asked about the difference between writing a series character and a stand-alone book, Gardiner says, “I love writing both. I love a series character because we get to come back and meet them again for a new story. It’s wonderful to meet up again with what we hope are friends we’ve come to know, just like real life. But some stories demand to be told from the point of view of the person with the most at stake. That calls for a stand-alone sometimes.”

And for fans of Evan Delaney and Jo Beckett, she had some good news. “They haven’t gone away. I certainly would love to have them come back. Their stories are not over.”

Gardiner—a mother of three—was no overnight writing success story though. After graduating from Stanford Law School, she practiced law for a few years in Los Angeles (“I escaped quickly, I decided going to court was not what I wanted to do with a bunch of toddlers.”) Then she taught legal writing at the University of California Santa Barbara. The winning Jeopardy! appearances came during the late ‘80s (“That was back when Alex Trebek had a mustache,” she laughs.) But it wasn’t until her family relocated to London for her husband’s job that she got serious about writing thrillers.

“When we moved to London, I no longer had an excuse not to write a novel,” Gardiner says.

Now, in addition to CBS buying the rights to UNSUB (which is the FBI term for an unknown subject), Gardiner’s books have received huge praise from many of the biggest-name authors around such as Stephen King, Lee Child and Jeffery Deaver. “It’s been wonderful,” Gardiner says. “I feel gratified that writers who are my idols say I have the chops.”

Next up for her is another Caitlin Hendrix thriller, Into the Black Nowhere.  At the end of UNSUB, Caitlin has moved from being a Bay area homicide detective to the FBI’s elite Behavioral Analysis Unit in order to chase after serial killers. “I’m happy to keep Caitlin running as long as she’s got her Nikes laced up,” Gardiner says.

There’s also some intriguing unanswered questions at the end of UNSUB that will have readers clamoring for more Caitlin Hendrix. “I love stories that are wrapped up, but I never want to wrap everything too tightly. Life isn’t that way. Leaving things messy at the edges provides realism and a thread that I hope will pull characters and I hope readers into the next story.”