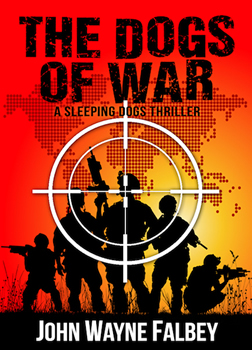 They’re here. In America. Thousands of Islamic terrorists committed to a rabid jihad that ends only when they’ve butchered the last man, woman, and child. Worst of all, they have nukes. The Day of Jihad is at hand. The odds of Western civilization being snuffed out grow stronger each day.

Compounding the threat, the Chinese are solidifying their grasp throughout Asia, while behind the scenes they sponsor the Islamic terrorists. Once an ineffective and weakening America crumbles, the Chinese are ready to extend their dominion over the entire planet. The Russian president is strengthening his grip on Europe and in the Middle East. Cyberwarfare is ramping up from Beijing to Moscow to Pyongyang to Tehran. And AGU—the Alliance for Global Unity—is orchestrating it all.

Only the shadow government known as the Society of Adam Smith, or SAS, may be capable of dealing with this threat. And it desperately needs the skills possessed only by that deadliest of hunter-killer teams, the Sleeping Dogs, including their newest member, an Australian.

With his rogue brother, the monstrous Maksym intent on killing his family, can Brendan Whelan reunite the Dogs in time?

The Big Thrill spent some time with John Wayne Falbey discussing his latest thriller, THE DOGS OF WAR:

I hope readers will gain an appreciation for the scale of the threat to Western culture and civilization posed by Islamic terrorism. As a result of the depth of my research, data are presented that should raise the level of awareness of how grave the threat is.

Political thrillers have been a staple of fiction for a long time. I believe my books, including this latest effort, seamlessly link actual global events with compelling storylines and fascinating characters. In so doing, it helps to elevate the genre.

Yes, I am amazed, and disturbed, by the extent to which proponents of the most rabid jihad have infiltrated our nation, and the threat they pose for the near future.

In my genre, David Baldacci, Brad Thor, Brad Taylor, Daniel Silva, Ben Coes, Alex Berenson, and the late Vince Flynn have impressed me with their creativity, depth of research, and their skills as wordsmiths.

John Wayne Falbey writes techno-political spy thrillers and action/adventure novels. His debut novel, Sleeping Dogs: The Awakening, has become an international bestseller on Amazon.com, and was endorsed by Compulsory Reads. He followed it with Endangered Species and Year of the Dog. Both are thrillers in the Sleeping Dogs series. He’s also the author of The Quixotics, a tale of gunrunning, guerrilla warfare and suspense in the Caribbean. A native Floridian and former transactional attorney, when he’s not writing, he’s a real estate investor and developer in Southwest Florida.

Please visit him on his website, where you can sign up for his short, infrequent newsletter announcing publication dates, appearances, and other matters relating to the Sleeping Dogs thrillers and his other novels.