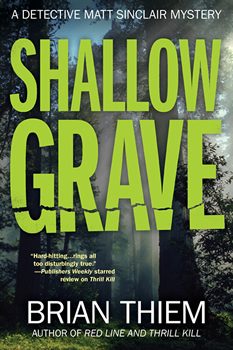 When the Oakland coroner’s office uncovers a body buried in a shallow grave in the outskirts of the city, homicide sergeant Matt Sinclair expects to find a drug dealer caught in the crosshairs of a turf war. Instead, the victim is identified as Phil Roberts, the commander of the police department’s intelligence unit and Sinclair’s former partner.

Police brass want to pin the murder on a dead member of an outlaw motorcycle gang, and they want the case closed quickly, but Sinclair and his current partner, Cathy Braddock, aren’t satisfied with that answer. As Sinclair delves into the details of Roberts’s past, secrets from his work and personal life come to the surface—secrets that some people will go to any length to keep buried. But Sinclair won’t stop until he finds the truth, even if it means sacrificing his former partner’s reputation and possibly his own career.

With SHALLOW GRAVE, Brian Thiem brings back his beloved detective for a thrilling third adventure in his acclaimed police procedural series.

Having carried a badge and gun for a living for 30 years, I strive to write authentic crime fiction. Readers expect my cops won’t thumb off the safety of a Glock before they shoot, my detectives won’t tell a suspect he has the right to remain silent as soon as they slap on the handcuffs, and when I delve deeply into the mind of my homicide detective protagonist, it’s how cops really think and feel. My hero has plenty of faults, but readers can be assured he will stop at nothing to take a killer off the streets, because to him, there’s no more profound duty than being entrusted with the investigation of the death of a human being.

There are many former cops with great stories to tell, and many authors of crime novels who are great writers. What makes my books unique is, in the words of my agent, they’re written by a former detective who can actually write.

I read Michael Connelly’s Harry Bosch novels many years before I even thought about writing a book myself. What impressed me most about his books was, even though the author never worked as a cop, he got the police procedures right and created a character so authentic, I could imagine Detective Bosch working alongside me in the homicide unit where I worked. When I set out to create a detective character for my first novel, I reread the first few books in his series to see how Michael Connelly created Harry Bosch. 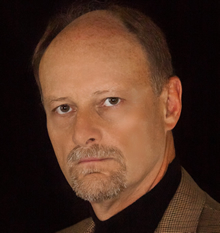 Brian Thiem is the author of Red Line, Thrill Kill, and Shallow Grave (2017) (Crooked Lane Books). In his previous life, he spent 25 years with the Oakland Police Department, working Homicide as a detective sergeant and later as the commander of the Homicide Section. In addition to homicide, he worked patrol, vice narcotics, and special operations (SWAT), retiring as a Lieutenant. He’s also a veteran of the Iraq War, and retired from the Army as a Lieutenant Colonel after 28 years of active and reserve duty. He has an MFA in Creative Writing, is an Adjunct Professor in the writing program at Western Connecticut State University, and lives in South Carolina.