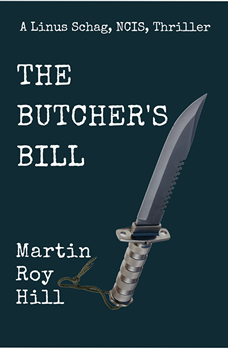 In Iraq, a shipment of $9 billion in cash goes missing. Each effort to find it ends in death. In Southern California, a mercenary’s murder, a severed head, and a bloody hand-written message spark a massive manhunt.

The man connecting these two events is William Butcher, aka: The Butcher. Those who stole the money want him dead. The cops want him for murder. Butcher’s only hope is his former NCIS colleague and closest friend, Linus Schag.

Torn between loyalties, Schag walks the thin line between doing his job or betraying his friend. Working from opposite ends, Schag and Butcher peel back the layers of conspiracy, revealing a criminal enterprise reaching into the highest levels of government.

Torn from today’s headlines, the plot of THE BUTCHER’S BILL ranges from the California mountains to the waters of the Pacific, and will keep readers on edge until its final, explosive climax.

Martin Roy Hill spent some time with The Big Thrill discussing his novel, THE BUTCHER’S BILL:

Most of my novels have some basis in fact, either historical or current events. The Last Refuge, the second in my mystery thriller series featuring Peter Brandt, for instance, was inspired by news reports saying that while we were still fighting the First Iraq War—Operation Desert Storm—American and European corporations secretly negotiated with Saddam Hussein to rebuild his war manufacturing capabilities. The plot for THE BUTCHER’S BILL looks at similar corruption during the Second Iraq War.

The basic plot for THE BUTCHER’S BILL was inspired by a tragic event in which a Los Angeles police officer went rogue and began killing people. He claimed he was trying to expose police corruption. I started thinking, “What if that were true?” That gave me the vehicle to write about the vast amount of corruption and war profiteering that went on during the Second Iraq War—Operation Iraqi Freedom. Bill Butcher is a former NCIS agent who appears to have gone rogue after trying to expose the theft of nearly $9 billion in cash during the war. That theft actually happened, probably the biggest bank heist in history, and it’s never been investigated. Butcher enlists the aid of his closest friend, NCIS Special Agent Linus Schag, to expose the truth.

The writers who had the most impact on me early in my life were the Lost Generation writers—Hemingway, Dos Passos, Remarque. But I’ve also read a great deal of—and been influenced by—writers like Ian Fleming, Alistair MacLean, and Raymond Chandler. I also enjoyed H.G. Wells, and still read his books to this day.

There are quite a few contemporary authors whose work I turn to again and again. David Morrell, James Rollins, Bob Mayer, to mention a few. I appreciate the research and detail they each put into their stories, particularly the historic background their plots have. 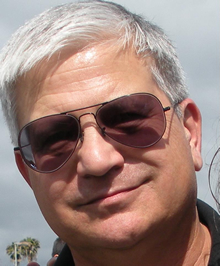 To learn more about Martin, please visit his website.