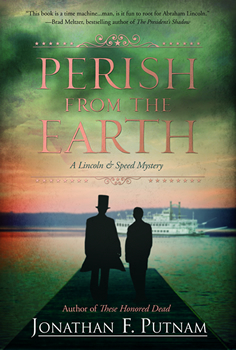 When a crooked card game leads to murder, young Abraham Lincoln, and his real-life best friend Joshua Speed, are forced to solve the crime. They soon discover, however, that far more than the identity of the criminal is at stake.

The murder takes place aboard a steamboat owned by Speed’s father, and Speed enlists Lincoln to defend the young artist accused of the crime. As the day of judgment hurtles toward them, Lincoln and Speed must fight to save not only the life of Lincoln’s client but also the merit of Speed’s good name.

PERISH FROM THE EARTH also involves a real-life murder that, while nearly forgotten today, was one of the most infamous crimes of the 19th century, provoking newspaper headlines from coast-to-coast and playing a key role in plunging the nation toward civil war. This murder upends Lincoln’s case and forces him to make a fateful choice—one on which the future of the nation may hang. If his client doesn’t first.

The Big Thrill caught up to PERISH FROM THE EARTH author, Jonathan F. Putnam, to discuss the second Lincoln & Speed Mystery:

The experience of watching up close a young lawyer named Abraham Lincoln ply his trade on the American frontier of the 1830s. No one present in the story knows that Lincoln will grow up to become the most famous person in American history. But the readers, as they follow the adventures of Lincoln, and his real-life best friend Speed, will get to see the origins of genius. And by plunging into the rough, dangerous, tumultuous world in which Lincoln and Speed live, the readers should gain a new appreciation of the times that gave rise to the great man and the consequential challenges he faced.

Historical mysteries are often told from below—from the perspective of a person of little power or authority in the society—and less often from above. PERISH FROM THE EARTH tries to do both. The main narrative comes from Lincoln and Speed, but along the way the reader will meet and come to empathize with a great variety of characters high and low, including: the independent, headstrong young woman who speaks her mind and seeks justice even at a threat to her own life; the African-American ferryman who fights for freedom in every way he can; the real-life abolitionist who will risk everything to advance his cause; the itinerant artist trying to making a living on the nation’s waterways; the matronly town gossip who knows a lot more than she lets on; and even a young lieutenant in the War Department’s Engineering Corps who will cross paths with Lincoln again a quarter-century later. His name is Robert E. Lee.

Several things that I discovered during the original historical research that went into the book interested me greatly. Most notably, that for four years before he married Mary Todd, Lincoln shared a room—and a bed—with the son of a wealthy Kentucky slave-owning family named Joshua Speed. Lincoln and Speed remained close lifelong friends. Furthermore, that the American frontier of the 1830s was a dangerous and unsettled place, where every man and woman had to fend for themselves, and where murderers could commit their crimes with impunity if they chose their victims—or their judges—carefully. 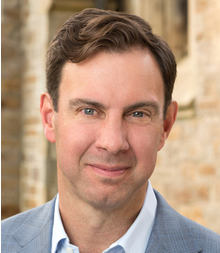 Jonathan F. Putnam is a writer and attorney. A graduate of Harvard College and Harvard Law School, he is a nationally renowned trial lawyer and avid amateur Lincoln scholar. He currently lives in London, England with his family. This is the second Lincoln & Speed Mystery, following THESE HONORED DEAD (2016).

To learn more about Jonathan, please visit his website.